Accessibility links
Pacifika: Peaceful Pop Sounds, in Spanish Three years ago, a Peruvian-born pop singer, a guitarist with a past in new wave, and a dub-wise bassist from Barbados formed a band in Canada. Pacifika's members talk about the worldly chill-out music of their recent debut album, Asuncion. 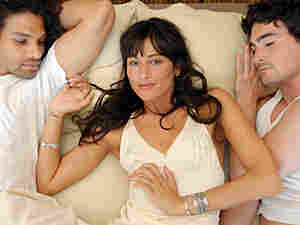 Born in Lima, Peru, she emigrated to Vancouver, Canada. There, she joined forces with Canadian guitarist Adam Popowitz, writing songs with a global pop feel. One night nearly three years ago, their sound was reinforced by the addition of Toby Peter, a dub-wise bassist raised in Barbados, and Pacifika was born.

"We had a space on the stage for someone just like him," Kane says. "And it turned out that we just went into the studio, the three of us, and it was kind of a magical thing. The next thing we knew, we'd formed a band."

The group spoke with host Maria Hinojosa about its debut album Asuncion, which ended up with a warm Latin tinge to it.

"We didn't intentionally make a Latin record," Kane says. "What we were trying to do was just, all of us to satisfy ourselves individually within a group. And the songs just kind of came out in Spanish, which was a really nice surprise, even for me."

Asuncion is heavy on blissful, relaxed pop songs. Popowitz says that the band sought a thread, a continuity which permeates the record.

"We wanted to have a theme to the album, a theme of music that resonated with us," Popowitz says. "We wanted every song to have a story and to have a sound, but all coming from a similar home."

So what was that sound they wanted people to hear?

"I think the overriding feeling that we have, all of us, is just to make people feel good," Peter says. "It's kind of nice to have something come through the pipes which we can all sort of go 'Ahhh' and feel better about things. We need to have some vehicle to chill each other out, you know?"

The chill-out factor is represented nicely in the title they've chosen for their band.

"Well, Pacifika could be a really calm woman; Pacifika could be a state that is extremely calm," Kane says. "I really strongly believe that words are very powerful, and so whatever we named ourselves was going to carry forth in our career with each other. ... And that is really the only reason we want to leave our homes, is to do something that's nice for the world. And spreading some joy and some peace: It's a nice thing."