Accessibility links
The Dude: A Little Lebowski, Alive in All of Us His given name is Jeffrey Lebowski — but the stoner hero of The Big Lebowski prefers to be called the Dude. As Guy Raz discovers, he's part fiction, part reality. But there's a little Dude in each of us.

Listen
The Dude: A Little Lebowski, Alive in All of Us 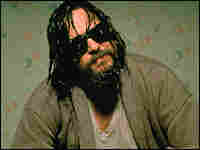 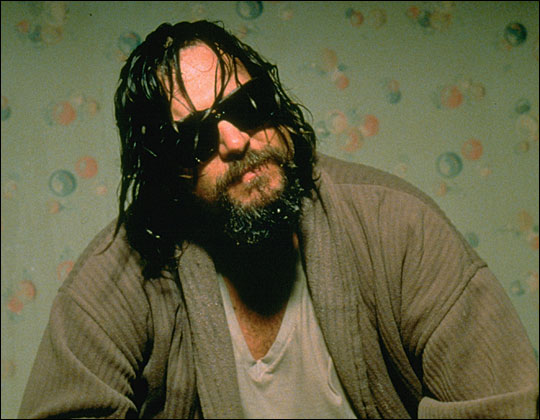 Lebowski on the Big Screen

Content Advisory: These scenes may not be suitable for all audiences.

The Dude Abides, Do You? Tie It Together: The 'In Character' Blog 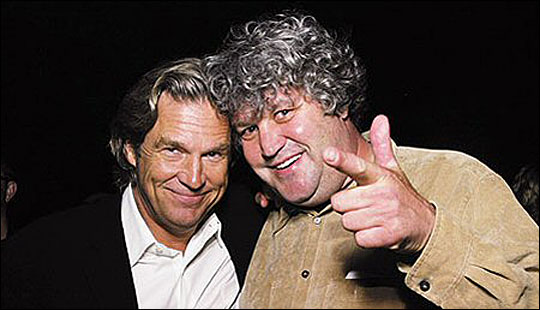 Jeff Dowd (right, with Bridges) is the real Dude — the inspiration for the Coen brothers' stoner hero.

His given name is Jeffrey Lebowski, but the ultra-relaxed California hipster at the center of the film The Big Lebowski calls himself simply the Dude.

We first meet him at midnight, walking down the aisle of a Ralph's supermarket, in a robe and jelly sandals. He's run out of half-and-half — which is bad, because it's a key ingredient in his drink of choice — the White Russian.

He's got strong opinions, the Dude.

The Eagles? "Jeezus, man, could you change the channel?"

He hates the Eagles. But he loves Creedence.

A Deadbeat with Reach

In the early '70s, the Dude was part of the Seattle Seven, a group of anti-Vietnam War activists. Now he's in his mid-to-late 40s, still wearing his hair shoulder-length and sporting a long, thick goatee. He's never married; he lives alone, in a one-bedroom apartment in Venice.

He loves his rug. "Yeah, man," he likes to say. "It really tied the room together."

Along with that steady regimen of White Russians, Jeffrey "The Dude" Lebowski burns it — a lot. So he's pretty deft with a roach clip.

And for recreation? "The usual: bowl, drive around, the occasional acid flashback."

He's also been cited in literally hundreds of doctoral dissertations and academic papers over the last decade. He's a fictional hero who has inspired a real-world lifestyle — even semi-annual Star Trek-style Lebowski conventions across the country.

So what is it about the Dude? We asked one of the few qualified to answer that: Jeff Bridges, who played him.

"You know, I was thinking about kind of preparing for this interview," says Bridges. "I didn't do that, in honor of the Dude. I don't think the Dude would've prepared."

And that sums up the heart, the soul and the core of what the Dude is about. It's what filmmakers Joel and Ethan Coen set out to do with the Dude — to personify casualness and American informality.

They found their muse in a man who's actually called "the Dude" in real life.

Ever since Jeff Dowd was a kid, everyone called him "the Dude."

"It just kind of came of the name Dowd," says the Los Angeles-based writer and producer.

In the movie, the Dude becomes a victim of mistaken identity. Turns out there's another Jeffrey Lebowski in town — the Big Lebowski.

The Big Lebowski's wife owes money to a half-dozen thugs around town, and when those thugs come looking to collect, they beat up the Dude, believing him to be the other Jeffrey Lebowski.

But the Big Lebowski is the Dude's polar opposite: He's a millionaire — conservative, uptight, formal. And when the two finally meet, the clash is just what you'd expect.

"Are you employed, Mr. Lebowski?" asks the Big L.

"Wait, let me explain something to you," says the Dude. "I am not Mr. Lebowski. You're Mr. Lebowski. I'm the Dude. So, that's what you call me. You know, that, or 'His Dudeness,' or 'Duder,' or 'El Dudarino,' if you're not into the whole brevity thing."

"He's a character who's very loyal to his friends, but in some ways, he's a real intellectual drifter," Jeff Dowd says. "A person who doesn't really care what people think about him. I mean obviously, if it's the middle of night, and you're in Ralph's in your robe and jellies, then obviously you don't care all that much about what people think of you. He's a character that sees the truth."

Joel Coen, who wrote the character, wasn't available for an interview, but in a 1998 documentary, he talked about the fun of dropping the Dude into "the most impossible of situations."

"[He was] the person who seemed least equipped to deal with it," Coen said. "And that was the conceit of the movie.

But somehow, the Dude is exactly the right person to deal with it.

"I think there's a little dude in all of us," says Bridges. "That's probably why I like him, because I see a lot of myself in the guy.

In the last scene of the The Big Lebowski, the Dude has solved the mystery. No one's trying to kill him. He's ready to go back to his routine.

He sits at the bar of the bowling alley with the Stranger — the mysterious narrator who pops in and out of the story — who tells him to take it easy.

"I don't know about you," the Stranger replies, "but I take comfort in that. It's good knowin' he's out there ... takin' 'er easy for all us sinners."

So the next time you start to feel anxious, aggressive, uptight or judgmental, just remember the Dude — and remember there's a little bit of him in all of us. 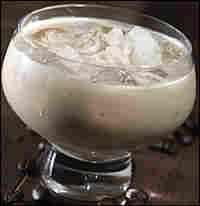 Top off with half and half

(Out of cream? The Dude uses powdered creamer in a pinch)