Accessibility links
Doctors Provide Care Despite Obstacles in China In China's earthquake-damaged Sichuan province, 39,000 medical personnel are now working to provide care, according to provincial authorities. Chinese emergency medical workers have been able to cope with the rush of injured people. 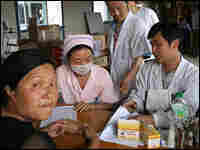 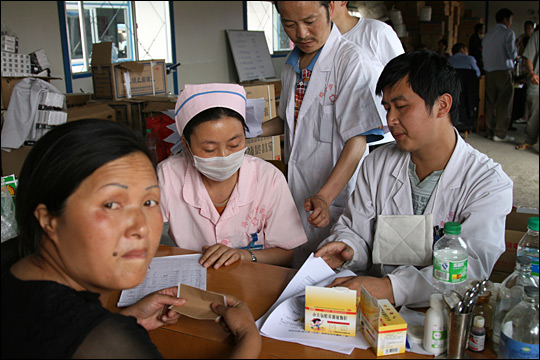 Dr. Yang Rensong meets with patient Wang Xiangying, who is suffering from back pain. 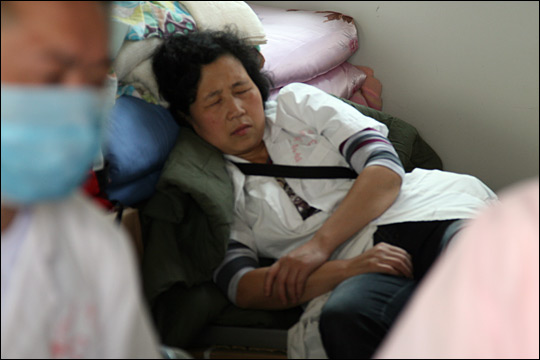 A medical worker catches a nap in the vast evacuee camp in Mianzhu. 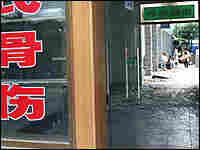 A damaged hospital in Han Wang, though standing, has been abandoned since the May 12 quake. Art Silverman/NPR hide caption 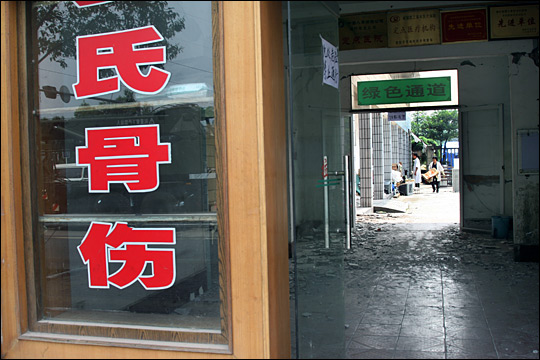 A damaged hospital in Han Wang, though standing, has been abandoned since the May 12 quake. 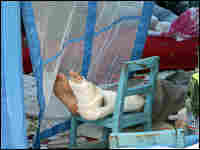 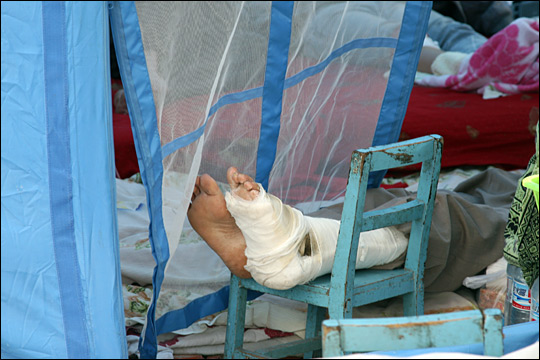 A patient's bandaged foot is elevated in a makeshift hospital.

In the Chinese city of Mianzhu, Dr. Yang Rensong wields a tongue depressor in one hand and a flashlight in the other as he examines Zhang Anxiu, a patient who appears to be in her 70s. She's hard of hearing, and she's suffering from dizziness.

It's a universal scenario for a doctor's office, but this office is in a tent city on the grounds of a sports park. NPR's Robert Siegel visited the camp, now a temporary home to 6,300 people evacuated after last week's massive earthquake in China's Sichuan province. Many live 10 to a tent.

According to provincial authorities, 39,000 medical personnel are now working in the disaster area. In addition, the World Health Organization is sending public-health experts and medical supplies to the province. The WHO says its contribution will help care for 130,000 people in need of treatment after the earthquake.

In Mianzhu, Dr. Yang sends Zhang off with a cupful of pills.

The next patient, Wang Xiangying, is 30-something and suffering from back pain. During the May 12 quake, she says, she was running barefoot and fell.

Yang gives her a medicated bandage and asks about her overall health. She says she had been suffering from a sore throat but is now feeling better.

Dr. Zhu Ming, an internist from Mianzhu, is now working 24-hour shifts at this medical station.

"Here in this camp, we deal with mostly heat problems, with sore throats and colds, and then we have a problem with skin rashes — that's a big problem," he says.

When asked if dust getting into people's lungs is a problem, Zhu says, "Yes, dust is a part of it. But really it's the big difference of temperatures. During the daytime, [it's] so hot and in the evening, so cold and damp. And the rain, it didn't help. That's why."

Zhu says everyone is getting bottled water to drink. The toilets work well, and people are able to do laundry.

He and others say that supplies are getting to the millions who are living in camps or makeshift tents along the road. Medicine appears to be plentiful.

Chinese emergency medical personnel have been able to cope with the rush of people in need of care. A Belgian kidney specialist and an Australian operating room nurse were both rushed in by the relief group Doctors Without Borders. Both said the same thing: The Chinese really didn't need them.

This came as no surprise to two Chinese coordinators for the relief group who are based in Beijing and flew to Sichuan right after the quake.

They share their observations from the outdoor, improvised emergency room of an orthopedic hospital in the hard-hit town of Han Wang.

Liang Jiaxiong says the government has done a very good job of treating those injured in the disaster. He says that local authorities' biggest public-health concern is preventing an epidemic of disease.

His colleague from Beijing, Dr. Ye Minling, says the doctors and nurses need relief, a comment echoed by doctors in the tent city.

"One night, they all cried together because they lost their colleagues here," she says. "They are overloaded in terms of work, and also they are very emotional by this disaster."

One of the doctors, Lin Jiaxiong, a practitioner of traditional Chinese medicine, talks about a member of the Han Wang hospital staff who died. Seeing other buildings collapse, the man had jumped from a fourth-floor window.

Instead of jumping to safety, it was to his death. Lin then reveals something unexpected and personal: His own 26-year-old daughter was crushed and killed in the earthquake. And he cries.