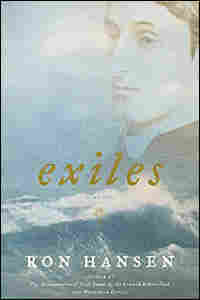 See all of Maureen Corrigan's fiction picks for the season.

Wednesday, December 8th, 1875. A soft confetti of snowflakes was fluttering down upon Wales. The higher windowpanes were gardens of frost. His right hand still twined a rosary, its anesthetic routine of prayers his nightly defense against sleeplessness. Lying in bed in his nightshirt and black woolen stockings, Hopkins recited his Morning Offering, then stood to use the chamber pot. The scuttle contained only a scarcity of coals and he would want those for his studies, so he gashed the fireplace embers with an iron poker and held his hands over their golden, waning heat. He lit and chimneyed one gas retort on the wall.

Washing with Castile soap and icy water, he worried over his scrawniness, his spindle shins, the green yarns of vein in his forearms, his face so thin that his zygomatic bones and jaw shaped harps underneath his ginger-brown, one-inch beard and mustache. His high school nickname was Skin, and even now at age thirty-one he weighed hardly a hundred pounds, with a jockey's height of five foot four. "Eats like a parakeet," Cyprian Splaine had said just last night, and Rickaby joked, "Eats like a single keet."

Yesterday's long underwear would do, Hopkins thought, and then a jersey that the Jesuit Theologate's laundress had shrunk. Over them he buttoned a cuff-frayed and graying black cassock with its faint stink of him, waisted it with a hand-wide black cincture, snapped on a starched white Roman collar, and laced on his ankle-high black walking shoes. And then he dipped a horsehair toothbrush in a yellow box of bicarbonate of soda and assaulted his grimace in the spotted mirror hanging over the washstand, amusing himself by rhyming: Gerardus M. Hopkins, S.J. / Auditor Theologiae. / Here at Saint Beuno's. / Far too long, my nose.

Because December 8th was the Catholic solemnity of the Immaculate Conception of Mary, classes were canceled and the forty-one seminarians and ten professors at Saint Beuno's School of Theology could while away the wide hours of morning and afternoon in holy obedience to hobbies and exercise in the glens and pastures of northern Wales.

Eight played football on a slanted pitch, in jerseys and cardigans, their hands shoved deep into their woolen trouser pockets due to the rawness of wind and cold. Bill Dubberley and three others went down to the green River Elwy with rods and reels "to do," as they announced at breakfast, "evil things to the fish." A professor of ecclesiology strolled outside in his derby, overcoat, cassock, and calabash pipe, reading his breviary. Edward Reeve stayed inside and tried to teach parlor tricks to his snappish pet ferret with white crumbles of Yorkshire cheese. Three Brothers worked noisily in the kitchen, preparing the one p.m. dinner, as Frank Scoles, a newly ordained priest, baked an angel food cake. Clement Barraud scowled with the world's own confusion as he read a gift copy of The Temptation of Saint Anthony, by Gustave Flaubert, that the Rector had given him permission to keep. A pianist of exemplary patience was in the sacristy practicing Johann Sebastian Bach's minuets on the grunting harmonium there. And Hopkins invited with him on a ramble to the city of Saint Asaph, three miles north, Joseph Rickaby, a very smart runt with an M.A. in philosophy who was the son of the butler to Lord Herries, and Albert Wagner, the "t" not sounded, a shy, smiling man from the Province of Lyons in France whose seniority in the Society of Jesus would cause him to be the first in their second-year class to be ordained a priest.

Strolling to Saint Asaph, Rickaby mentioned a variety of writing projects that he wanted to tackle once examinations were concluded and was particularly keen on getting started on an index to the works of John Henry Newman. Wagner was a sterling linguist who said his post-examination project was to learn Coptic as a prelude to the study of Egyptian. Whereas Hopkins claimed he had no grand ambitions for the holidays; that the pursuit of holiness was enough.

Rickaby said, "But I'm scandalized you would lie so flagrantly on one of Our Lady's feasts! You're a hobbyist if I've ever seen one. Always learning Welsh, hunting etymologies, sketching cloud formations..."

"But hobbies are excellent things!" Rickaby said. "A project is like a sponge that sucks up all your attention and keeps you from brooding over whatever displeases you. Some overriding interest is the great preservative against quarreling and mutinous thoughts."

Rickaby turned to Wagner. "Restless as a weevil, our gentle Hop is. Don't think he won't fill his hours with something."

The theologians carried sandwiches but no coins, and the city of Saint Asaph was without great fascination, so they simply visited the once-Catholic cathedral to see the restoration of the intricately wood-carved choir stalls that Oliver Cromwell tried to destroy by using them as cattle pens. And then the three walked back to Saint Beuno's in the sifting snow, edifying each other by praying the five glorious mysteries of the Rosary on the way, and then goading the scholastics fishing the Elwy until Bill Dubberley caught a trout and fell waist deep in the river while hauling it in.

Hopkins shouted, "Has it dampened your enthusiasm, Bill?"

A jubilant Dubberley hoisted his trout.

At six the whole school went to the main chapel in their cassocks and birettas for the singing of Vespers and for the Benediction and Exposition of the Blessed Sacrament, Rector James Jones, the celebrant, incensing the congregation and the Host, leading them in the Eucharistic hymn "Tantum Ergo," and blessing them with the ceremonial monstrance, in which the Host seemed the core of golden rays of sunlight.

And then, to honor the solemnity at the evening supper, a quart decanter of claret was on each refectory table in addition to the usual pitcher of ale. Conversation in English was allowed, so there was a good deal of laughter, and the priests and scholastics lingered until Brother Fogherty shouted, "Are you all still dithering here?" and shooed them out so he could stack the Windsor chairs and wet-mop the oak floor.

Exiting the room, Reverend Josef Floeck of Germany, a professor of dogmatic theology who had recently been ostracized with other Jesuits by Otto von Bismarck, asked Hopkins, "Haff you read about za Deutschland und za fife German nuns?"

Hopkins went to a scholastics' recreation room that was as large and high-ceilinged as some village churches, but furnished like a run-down gentlemen's club, with a variety of Irish Georgian wingback chairs surrounding a great fireplace, two walnut secretaries for writing, each with something wrong with it, hand-me-down upholstered sofas and library chairs, a green felt billiards table, and card tables for whist or the game that Americans called checkers, the English called draughts, and Albert Wagner called le jeu plaisant de dames.

Wednesday morning's London Times was still cool from its afternoon journey from Rhyl as Hopkins carried it to a sofa underneath a sconced gas retort. The front page, as always, was filled with three- and four-line advertisements for Newcastle, Silkstone, or Wall's-End coal, Bailey's elastic stockings, ladies' abdominal belts, Pulvermacher's Patent Galvanic Chain Bands, Antakos corn plasters, Iceland Liniment for chilblains, and "Want Places" appeals from wet nurses, scullery maids, and cooks, each willing to supply testimonials about their skills and finer qualities. Other pages reported the meteorological data for the month of November, and news from Berlin about Britain's shrewd purchase of shares in the Suez Canal. Writing from Rome was an "occasional correspondent" who noted Italy's sarcastic response to the contempt for Catholicism of Britain's former Prime Minister, William Gladstone, who'd written that the Jesuits in particular were "the deadliest foes that mental and moral liberty have ever known." Old news for Hopkins, and he lost interest in the article after the first paragraph. But on page 5, next to a dull column on President Ulysses S. Grant's address to the Congress of the United States, was a headline, loss of the deutschland.

"Wrecks and Casualties" was a regular department in each issue of The Times—sixteen accidents were recorded on December 8th—and among the Victorians there was a general fascination with tales of great tragedies at sea. But more than that, Hopkins's father was the author of A Handbook of Average and A Manual of Marine Insurance, both standard reference books for negotiating, averaging, and adjusting the liabilities to insurance underwriters of cargo losses and shipwrecks, so Hopkins grew up in a world wet with marine accidents and was especially attentive to them.

In this instance, telegrams from Sheerness, Harwich, and the Lords of the Admiralty were pieced together with a Press Association report, each duplicating or elaborating on the news that the North German Lloyd steamer Deutschland, heading to New York from the port of Bremen in a heavy gale, ran aground on a sandbank near the mouth of the Thames River at five in the morning on December 6th. "She afterwards knocked over the sand, and is now lying in 41¿2 fathoms, apparently broken amidships. Estimated number of passengers and crew lost, 50; remainder landed and under the care of the German Consul at Harwich." Steerage passengers who were missing were not listed, but among those lost from the first- or second-class cabins were five exiled nuns, whose misspelled names were given as "Barbara Hilkenschmidt, Henrico Tassbander, Lorbela Reenkober, Aurea Radjura, and Brigella Dambard."

Frederick Hopkins, a medical doctor who had entered the Novitiate with Gerard in 1868, and whose suave manner had earned him the nickname of "the genteel Hop," sat on the sofa cushion next to his and glanced at the page. "Are you reading about the Deutschland?"

Thirty-three years later, Frederick would become the Bishop of Honduras, and he would drown in 1923, at age eighty-nine, when the overloaded paddleboat he was on sank in eighteen feet of water. But now the doctor said in his soothing voice, "Well, the sea can be very wild."

Edward Reeve was playing billiards with Cyprian Splaine of Liverpool, a swashbuckling scholastic who was good at whatever game he took on. Reeve tried to distract him by saying, "I can still see our evening menu on your beard, Sib."

Without looking up from his shot, Splaine said, "The front of your cassock displays what we ate last week."

There was general laughter, and as Hopkins got up from the sofa, he wryly misquoted Tertullian's praise for Christian love. "Look," Hopkins said, "how they shove one another."

Walking to the main chapel, Hopkins heard a sneering wind outside and he thought of it as sea-roaring Deutschland weather, carried there as if by the Royal Mail. But in the darkened chapel it was so silent he could hear the faint sweet sibilance as knuckling flames consumed the wicks of the votive candles. He genuflected and sank onto a kneeler six pews back from Christ in the tabernacle and noticed off to his right Brother McKeon saying his Rosary. Reverend William Hayden, an Englishman just three months a priest, was in front of McKeon and tilting toward the ruby glow of the sanctuary light in order to read his breviary.

Casting back on his day in his nightly examination of conscience, Hopkins accused himself of a snorting, sour, unspiritual tone to some of his conversations, prayed for those who'd died, were injured, or lost loved ones in the shipwreck, but thanked God for the beauties and contrarities of nature, the tonic of outdoor exercise, and the cheer and solace of his Jesuit brothers. 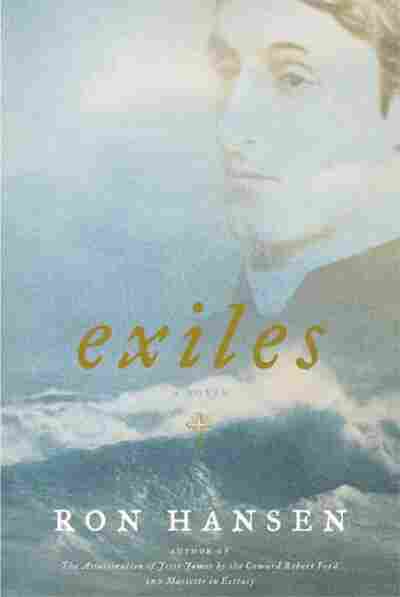