Accessibility links
In Cleveland, Foreclosures Decimate Neighborhoods Since 2000, the Cleveland area has recorded 80,000 home foreclosures — the most per capita in the United States. The fallout from the crisis is hitting the city's neighborhoods hard: Abandoned homes now line once-thriving city blocks. 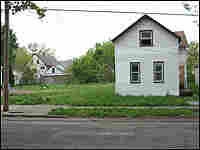 A foreclosed, abandoned home in Cleveland's Slavic Village sits next to a lot where another house once stood. Justine Kenin, NPR hide caption 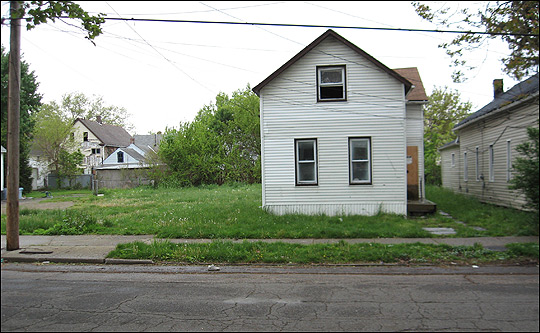 A foreclosed, abandoned home in Cleveland's Slavic Village sits next to a lot where another house once stood. 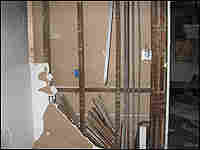 Vandals have stripped the home's interior of all the fixtures, plumbing pipes, windows and wiring. Justine Kenin, NPR hide caption 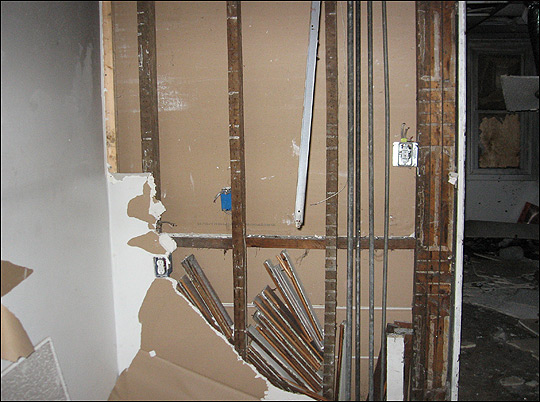 Vandals have stripped the home's interior of all the fixtures, plumbing pipes, windows and wiring.

In Cleveland's Slavic Village, a neighborhood on the southeast side of the city, "termites" have decimated a house once occupied by a couple.

The intruders haven't chewed through the wood or even destroyed the carpets. These termites, as Cleveland City Councilman Tony Brancatelli calls them, are vandals who've stripped the recently foreclosed house of its fixtures, plumbing pipes, windows and wiring.

"It's a very lucrative business. These aren't just necessarily somebody trying to get a fix or a crack head. These are professionals who come in to strip these houses," Brancatelli says. "We saw people in vans with high-powered equipment."

Vandalized homes are just one aspect of the fallout from the national subprime mortgage meltdown that has hit the Ohio city particularly hard. Since 2000, Cuyahoga County, which encompasses Cleveland, has recorded 80,000 foreclosures — the most per capita in the country. Nearly 19 percent of those foreclosures occurred last year, according to city statistics.

The roots of Cleveland's ballooning foreclosure crisis took hold in the 1990s, according to county Treasurer Jim Rokakis. He says he began noticing an alarming increase in the number of home loans that had no visible means of support. Many borrowers were speculators who took advantage of offers touting no money down and cash back at closing.

Often, a single speculator would buy up multiple homes, hoping to cash in at the close, Rokakis says. He cites one speculator who bought up at least five homes in Cleveland.

She "probably received cash back on each of those properties at the close, the mortgage broker was probably a friend of hers, the appraiser was probably working in concert with them," Rokakis says. "The mortgage banker ... really didn't care because he knew or she knew that she was going to take these mortgages and sell them to Wall Street.

"And until the bubble burst in sometime around October of 2006, it was a wondrous operation," he says.

Preying on a Sour Economy

Cleveland's wilting economy also has contributed to its suffering city blocks. A quarter of all U.S. manufacturing jobs lost in the past 10 years have been in Ohio, says Ivy Zelman, founder of the equity research firm Zelman and Associates. Many people borrowed against their homes for cash, lost their jobs and could no longer pay their mortgages.

Many others such as senior citizens and minorities were rejected by banks for loans, says Zack Reed, councilman of Cleveland's Third Ward. He says they were easy targets for predatory lenders that offered initial no-interest loans, counting on the fact that their borrowers wouldn't read the fine print about ballooning interest rates down the road.

"Because they were on fixed income, they may have missed a payment or two. Well, they didn't read the bottom line that said [rates] went from 0 percent for missing the payment to 10 percent. They missed another payment. Now it went from 10 percent to 20 percent. Now it's well out of their control," Reed says.

On one street in Reed's ward, 25 homes stand abandoned. Many have been taken over by drug dealers and prostitutes. In Brancatelli's 12th Ward, 200 homes were demolished last year. Brancatelli says about 1,000 should come down, which would cost the city around $5 million — money that would not be spent on roads, schools or police protection.

"It's a crime because when you look at this house, it was occupied not too long ago when it was an affordable roof over somebody's head. Now we have to push it into the ground," Brancatelli says of the home stripped by vandals.

Rokakis, the county treasurer, says the abandonment rate has led to a decline in property values that will affect basic city services, including schools, and police and fire departments.

"Next year, when we do the reevaluation of the properties, there will be a hit to all the taxing subdivisions — the schools, the cities, the county will get less as a result of lower values," Rokakis says.

But for Cleveland residents who are sticking by their neighborhoods, one of the biggest concerns is maintaining the integrity of their blocks, even as their neighbors pull up stakes.

Reed says a recent conversation he had was telling.

"A young lady ... talked to me the other day ... who said, 'Councilman, all I want to do is sit down on my corner. Sit out on my porch and just enjoy a nice summer day. That's all I want to do,'" he says.