Accessibility links
Bait Cars Ruin Joyrides for Auto Thieves Bait cars are designed to be stolen. They're rigged with a device that allows police to remotely shut off the engine and lock the doors. And hidden cameras offer a glimpse at the lives of thieves. 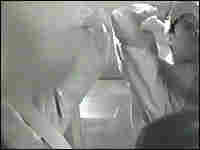 Police departments all over the United States are adopting a new method of catching car thieves in the act: the bait car. Bait cars — or decoy cars — are designed to look like the most typically stolen model in a given area.

But they're also rigged with GPS tracking, a remote-control "kill" device that allows police to cut off the engine and lock the doors, and hidden cameras. In one video, two thieves are seen driving away, giggling incessantly and fiddling with the radio.

"In this particular case, these two individuals have entered the car and start searching the interior. And then, you can see, the gentleman pulls a machete from his waistband," says Detective Chris Dengeles, who runs the bait car program for the police department in Arlington County, Va.

Dengeles says the county got the idea for the bait cars from Minneapolis. Every couple of weeks, someone in Arlington breaks into one of the cars, which are often stocked with a hidden set of keys in the glove compartment or valuables scattered on the backseat.

The entire debacle is captured on the hidden video camera, often offering a rare glimpse of thieves at a moment of stealth, of cockiness, of astonishment, of defeat and, not uncommonly, of prayer.

"They're not the smartest folks in the world, though, because the emergency brake is actually pulled." Dengeles says, describing the video of the two giggling thieves (you can watch it at left). "So they spend about a good two to three minutes trying to figure out how to get the car to move."

The machete-wielding passenger eventually figures it out.

But from the moment they broke into the car, the perpetrators were doomed. The bait car's electronic triggers send a wireless signal to the Arlington County Police communications center.

Life Before the Bait Car

Before the advent of the bait car, cops had to stake out old-fashioned decoy vehicles, waiting for potential criminals. Now, the wireless signal alerts a police dispatcher, who tracks the car by GPS and notifies nearby patrol cars. When cops are in sight, the dispatcher disables the bait car.

When asked if the program is a form of entrapment, Dengeles explains that "entrapment is obviously when the government places the idea to commit a crime in a person's head that wasn't already there. Nothing about our vehicles or our program does that."

Since Arlington started the program in 2002, the police have captured 67 subjects, and 59 have been charged. Dengeles says the ones who weren't charged were typically minors. But with those subjects actually charged, the police had a 100 percent conviction rate.