Accessibility links
Supporters Work to Free Egyptian Blogger Exactly one month ago, 22-year-old law student Kareem Amer was sentenced to four years in prison for what he wrote on his personal Web site. His case has shed a spotlight on the country's laws concerning online speech. 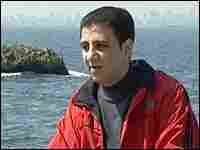 Abdel Kareem Nabil Suleiman, or "Kareem Amer," was convicted of violating the same legal provisions he criticized on his personal blog. hide caption 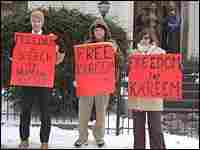 Exactly one month ago, a 22-year-old law student was sentenced to four years in prison for what he wrote on his personal Web site. The case of Abdel Kareem Nabil Suleiman, or "Kareem Amer," as he is known in the blogosphere, has shed a spotlight on a growing community of bloggers in Egypt, and on the country's laws concerning online speech.

A translation from Kareem's final blog post in October reads, "The mere existence of legal provisions that criminalize freedom of thought, and threaten with imprisonment anyone who criticizes religion in any way, is a grave defect in the law."

Two days after he posted those words, he was interrogated by Egyptian police. Eventually, he was convicted of violating the same legal provisions he criticized on his personal blog.

A court convicted him of contempt of religion, specifically Islam, and of defaming President Hosni Mubarak. Though this is the first time a blogger in Egypt has been convicted by a court for blogging, Egyptian bloggers say free speech and political activists are often arrested and detained.

Cairo-based Alaa Abdel Fattah spent a month and a half in jail last year for protesting injustice in Egypt's legal system. Last week, Egyptian authorities targeted him again, producing a list of opposition activists that included him and other bloggers.

At a protest days later, police arrested and jailed 20 people for two days, including some of the bloggers on that list.

Another blogger targeted for spreading what the government called "false news" posted a video of alleged torture and rape in an Egyptian prison.

This and other videos documenting alleged human rights abuses have made Egyptian bloggers a subject of attention. Wael Abbas, the blogger who posted a copy of that torture video, reportedly also has a warrant out for his arrest.

Blogger Alaa Abdel Fattah says he wasn't tortured during his 47 days in jail last year, but knows others who have been.

Egyptian activist and blogger Mohammed el-Sharkawi, 24, was tortured and sodomized "using a rolled up piece of cardboard for nearly 15 minutes" according to his lawyer, Gamal Eid. Human rights groups say Egyptian authorities have yet to investigate or prosecute the police officers accused.

Lawrence Wright, author of The Looming Tower: Al-Qaeda and the Road to 9/11, says torture is rampant in Egypt's jails.

"We need to be much more universal in our condemnation of torture in Egypt," Wright says.

He argues that the United States should also support due process and humane treatment for Islamist prisoners, not just reformist bloggers like Kareem.

"There's a greater risk in not advocating for those values for both sides. The Islamists in prison in Egypt pose a real threat when they get out," Wright says. "If we advocate for their rights, if not for their cause, we stand a better chance of having some kind of understanding."

Nabil Fahmy, Egyptian ambassador to the United States, believes much progress has been made on social and political reforms. How Egypt's government and society go forward in dealing with bloggers, he admits, still remains a question mark.

Meanwhile, a coalition of Kareem's supporters are campaigning for his release, including organizing protests at Egyptian embassies around the world. Coordinator Constantino Diaz-Duran in New York says that Kareem's family has disowned him, so the coalition plans to provide some of the necessities that prisoners in Egypt generally depend on families to provide: medicine, clothing and food.

Kareem's father has said that he would like to see Islamic Sharia law applied. This would give Kareem three days to repent, or face execution. As dire that sounds, this may be one of his last remaining options. On Monday, an Egyptian court rejected an appeal for Kareem's release, a move the U.S. State Department has condemned.