Warning: getimagesize(https://media.npr.org/books/summer/2008/corrigan/makebelieve_cover-53b505b646aca2c7c756552f81a8ad4d2b06de5a.jpg): failed to open stream: HTTP request failed! HTTP/1.0 404 Not Found in /var/www/html/src/Views/CommonJsonldView.php on line 87
 Excerpt: 'Minders of Make-Believe' : NPR
Accessibility links
Excerpt: 'Minders of Make-Believe' Leonard S. Marcus takes readers from the first children's book to originate in the New World — The New-England Primer of 1689 — up to the Harry Potter phenomenon. 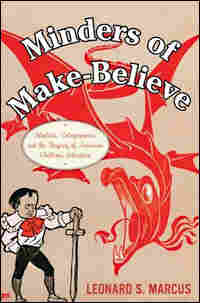 Providence and Purpose in Colonial America and the Young Republic

Why came we unto this land? Was it not mainly with respect to the rising Generation? — Eleazar Mather, Northampton,Mass., 1671

It is for the books of early instruction, in a great degree, to lay the foundation on which the whole superstructure of individual and national greatness must be erected. — William Cardell, Story of Jack Halyard (1825)

New England puritans reverenced reading as the key to living the godly life. Reading made possible the intimate knowledge of the Bible thought necessary to salvation, which every Christian had both the capacity and the obligation to seek. To grow up as an illiterate was a matter of dire consequence, for, as the General Court of Massachusetts noted on providing for the establishment of reading schools for the colony: "One chief project of that old deluder, Satan, [is] to keep men from the knowledge of the Scriptures." With a view to commencing their children's spiritual training at the earliest possible moment, many Puritan families did not wait for school but taught their four- and five-year-olds to read at home.

In 1642 the first of several colonial New England laws mandated that children, servants, and apprentices living in Massachusetts acquire the ability to "read & understand the principles of religion & the capitall lawes of this country." A Connecticut statute of 1650 obliged parents to catechize their children and servants weekly. The New Haven colony made it mandatory for children and apprentices to "attain at least so much, as to be able duly to read the Scriptures, and other good and profitable printed Books in the English tongue. "While it took nearly fifty years for the Massachusetts colony's elders finally to make good on the legal requirement, enacted in 1647, for towns of fifty households to hire a teacher responsible for ensuring the reading and writing skills of the community's children, and for towns of twice that size to open a public school, literacy rates seem to have been high before then anyway. As formal education took hold, Latin language and literature studies introduced young people to a second, more worldly experience of reading—one that, offered in the name of the time-honored tradition of the classical education, did not seem incompatible with their Bible studies.

The faithful understood that reading in a sinful world might indeed be turned to sinful ends. "To the seventeenth-century Puritan," writes historian Gillian Avery, fiction did not only deflect the reader from more profitable occupation[;] there was an additional, very grave objection. It was untrue, therefore a lie, and therefore damnably wicked. Puritans customarily divided lying into three categories: the pernicious lie, made for evil intent; the officious lie, intended to prevent some danger or procure some good; and the sporting lie, "which is to make one merry, or to pass away Precious Time."

While the first New Englanders had scant opportunity for distraction by fiction, concern over the consequences of the "sporting lie" would far outlast colonial days, when invented tales, in particular those published for young people, had no appreciable place in the cultural landscape. The Puritan belief that indulgence in fiction represented a fateful misuse of the essential life skill of reading set the pattern for what was to remain the central debate about juvenile literature through the time of the Civil War, with reverberations lasting well into the next century.

North America's first printing press began operation in Cambridge, Massachusetts, in 1639, nineteen years after the Mayflower landing. The Cambridge Press issued one or more broadsides before producing its first full-fledged book, the Bay Psalm Book, in an edition of 1,700 copies. Fifty years later, the first children's book of American origin issued from Boston. The New-England Primer was aimed at teaching young people their letters and setting them on the path to the good Christian life. Although few details of the book's creation are known, it is generally believed to have been the work of an English bookseller, publisher, journalist, and staunch antipapist named Benjamin Harris, who fled London for Boston in 1686 following the ascent of King James II to the British throne. Harris is thought to have compiled The New-England Primer between 1687 and 1690 and to have offered it for sale at his London Coffee House in Boston. The little book must have sold satisfactorily. In 1691 Harris advertised a second printing. The oldest surviving copy of the Primer dates from 1727 and was published in Boston by Kneeland & Green.Whether or not it is quite the same book as the one devised by Harris is unknown.

From the first, The New-England Primer served as a much-needed unifying force for the northern colonies' community of pious folk, who, as historian Paul Leicester Ford observed, "very quickly [showed] a tendency . . . toward the individualism implied by all dissent and especially Congregationalism." In the absence of copyright protection, bookseller-printers in towns and later cities from New England to the South reprinted the book well into the nineteenth century. By 1830 the Primer had passed through 450 editions, with an estimated total sale of between 6 and 8 million copies.

While an illustrated alphabet in rhyme, the shorter catechism, and selections of prayers and Bible verses remained the unchanging core of The New-England Primer, variations in the text from edition to edition were common and became a barometer of changing cultural codes and priorities. The Primer's alphabet rhyme, being the text element that was easiest to alter, displayed the most variation. In the 1727 Boston edition, the "K" verse read: "Our King the good/No man of blood." But seventy years and a revolution later, the equivalent rhyme in a 1791 edition printed in the same city declared: "Kings should be good/Not men of blood." Not to be outdone, a Philadelphia edition of six years later stated: "The British King/Lost states thirteen." Between 1740 and 1760, a span of years that overlapped with the evangelical revivalism of the Great Awakening, the Primer alphabet changed to reflect the trend, with the 1727 "C" rhyme ("The Cat does play,/ And after slay") making way for: "Christ crucify'd/For sinners dy'd." After 1790 the emphasis shifted decisively from salvation to worldly concerns, as witness this "K" rhyme from a New York edition of 1819: "Tis Youth's delight/ To fly their kite." It was a triumph for secularism that, as Paul Leicester Ford wrote only half in jest, "should have made the true Puritan turn in his grave."

The Primer was first published at a time of dramatic change in New England life. By the end of the seventeenth century, church membership in New England had undergone a startling transformation, with women for the first time finding themselves in a substantial majority.With this fundamental shift came others: a diminishment of the father's role as spiritual leader of the household; and a new way of approaching the spiritual care and training of the young that replaced the "emphasis on a vengeful God the father, demanding obedience and submission to his laws" with a less stern, more affectionate "emphasis on the figure of Christ, protecting his followers." These changes within the family and community may help to explain the immense popularity in the colonies of James Janeway's A Token for Children, Being an Exact Account of the Conversation, Holy and Exemplary Lives and Joyful Deaths of Several Young Children, the first volume of which appeared in England in 1671, and which booksellers imported to America a decade later. Janeway's tales of the brave and pious deaths of thirteen Christian boys and girls were nothing if not heartrending. Even more remarkable to young readers of the time, however, would have been the mere fact that this was a book—the first children's book—whose central protagonists themselves were children. What was more, the boys and girls Janeway described were better Christians than the adults in their midst. Well before Wordsworth, the narratives seemed to suggest that in strength of religious conviction and sheer heroism, the child might indeed be the father of the man.

Historian Bernard Wishy has noted that as paternal rule in the New England household faded in reality, it flourished a good while longer in story and myth. In popular advice books for parents of the 1830s written by Jacob Abbott, Samuel Goodrich, and others, "it was the mothers who were at the center of home life, [but] in books for children written by the same authors, the father was clearly in control of the family. This difference," according to Wishy, "is not surprising for it had not been decreed that the mother formally replace the father. She had, for the sake of practicality, stepped into roles in the nurture literature that the American father could not play well. "Under the new regime, not least of the mother's primary duties was "to teach the child that he owed supreme respect, love, and obedience to his father."

The New-England Primer's first edition antedated by less than a half-dozen years the publication in Britain of John Locke's Some Thoughts Concerning Education (1693), a wide-ranging essay on child-rearing practices that highlighted children's capacity for reason and their susceptibility to being molded for life through judicious exposure to books and other influences suited to their capacity. Locke must have shuddered at the thought of Janeway's bestseller, however inspirational others found it. By recommending that children be introduced to reading by means of some "easy pleasant book," Locke pointed the way for the creation by England's John Newbery two generations later of a new type of illustrated children's book in which, unrepentantly, amusement shared pride of place with instruction as the publisher's stated goal. By the 1770s,Newbery's groundbreaking books were in circulation in the colonies in both imported and pirated editions.