Accessibility links
China's 'Super Girl' Navigates Her Own 'Idol' Fame Three years ago, Chris Lee won a singing contest called Super Girl — a sort of Chinese version of American Idol. Her instant stardom overwhelmed her, and she is still finding her way, and her voice, in China's pop music industry. 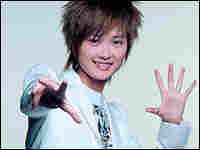 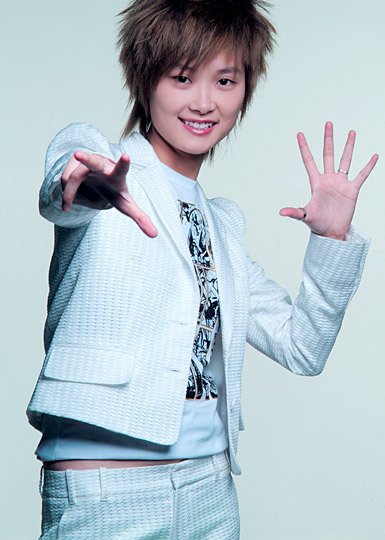 Three years ago, Chris Lee won an American Idol-like contest called Super Girl. She dabbles in many musical styles — ranging from Latin to rock to R&B — and recently released her third album.

Following the powerful May 12 earthquake in southwest China, Chinese pop stars have been performing to raise money for the victims. Among them is a young woman from Chengdu who became China's first overnight pop idol.

Three years ago, Li Yuchun — who uses the English name Chris Lee — won a singing contest called Super Girl. She is still finding her way, and her voice, in China's pop music industry.

It all began with the show, a sort of Chinese version of American Idol, which its sponsors formally named Mongolian Cow Yogurt Super Girl Contest. In July 2005, some 400 million Chinese TV viewers tuned in to watch Lee, with her androgynous looks and spiky hairdo. Fans picked Lee, who was then 21, over thousands of other contestants, voting her the winner of the contest by cell phone text messages.

During a recent visit to Lee at her record company in Beijing, the pop star gets her makeup done before a concert. It's just hours after the earthquake. Lee says she reached her parents by phone in Chengdu — which is located near the quake's epicenter — and that they are OK.

She then talks about her fame. Her instant stardom caught her off guard, she says.

"I didn't go into it with a clear head. I just thought I was participating in a singing contest. Each part of the contest followed in quick succession, so there was no time to think about it," she says. "Finally, I realized a lot had changed. But I couldn't go back to my original life. It was all sort of dizzying."

Some parents and propaganda officials did not appreciate Super Girl's slightly rebellious tone, and perhaps even its democratic selection process. In 2006, the State Administration of Radio, Film and Television set tough but vague rules for similar shows, banning what it called "weirdness, vulgarity or low taste."

Lee's look now is more conservative. On her latest album, Youth of China, she wears a Chinese-style shirt, and her hair points down, not up.

She characterizes this change as "an experiment" and her "blessing for the Beijing Olympics."

Lee has been a stylistic chameleon, dabbling in styles from Latin to rock to R&B. Last year, she recorded a Brit-pop-style tune called "Green," to support the environmental group Greenpeace.

In one song on Youth of China, Lee runs down the hall and into a classroom. "Present," she tells the teacher. "Late again," he scolds, "and you flunked your test. Go stand outside." The class laughs.

The song is called "Poor Student." Lee says it's about being an ordinary kid who dreams of standing out.

She recalls her own first year of college. "I entered the music conservatory, but because I'd never studied music before, I lagged far behind my classmates. I wanted to get good. But I felt very helpless, and I didn't know what to do or whom to talk to," she says.

Another song is called "I'm Your XX." She explains that when interviewers ask her what her fans think her image is, or why they like her, she doesn't know how to respond.

"I'm different to each of my fans. They like me for different reasons. 'I'm Your XX' just allows my fans to fill in the blanks for themselves," she says.

Lee's search for a musical persona is her way of expressing her individuality. She sees this search as a trademark of her generation, which was born in the 1980s, she says.

"We're a generation of only children. Most of us have no brothers or sisters. So our individuality is very evident. We have lots of confidence, but also a lot of uneasiness," she says. "The confidence is because we're independent, extroverted and self-centered. I can't put my finger on what the uneasiness comes from, but I often feel it."

Whatever Chinese may think of her, Lee is now a household name in China. The Super Girl phenomenon is essentially over, and she has to build her musical skills to advance her career. Right now, she says, she is learning to play the drums.