Accessibility links
McCain Cancer-Free and Healthy, Records Show Sen. John McCain appears in overall good health, despite some close calls over the past eight years. The presumptive Republican presidential nominee has had no recurrence of melanoma, a form of skin cancer. McCain has had at least three melanomas removed in the past 15 years, the most recent in 2000. 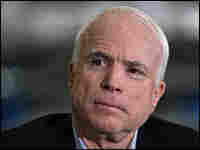 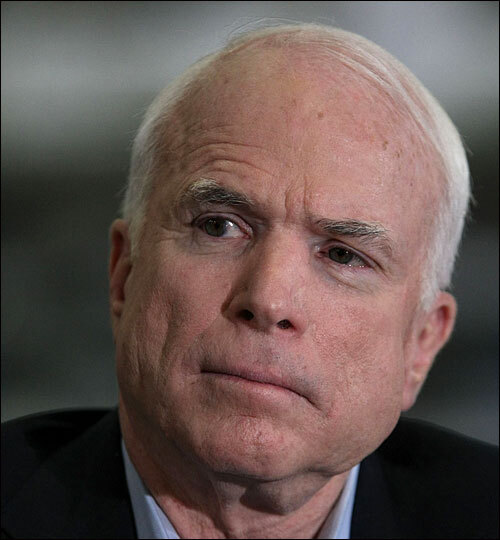 Sen. John McCain appears to be in overall good health, despite some close calls over the past eight years, his medical records show.

The presumptive Republican presidential nominee has had no recurrence of melanoma, a form of skin cancer. McCain has had four melanomas removed since 1993, the most recent in 2002.

Those medical details are contained in 1,173 pages of documents that the McCain campaign put on display for three hours Friday for a group of reporters at a Scottsdale, Ariz., resort.

"While it is impossible to predict any person's future health, today I can find no medical reason or problems that would preclude Senator McCain from fulfilling all the duties and obligations of president of the United States," Eckstein said.

Dr. Suzanne M. Connelly, a Mayo Clinic dermatologist, told reporters that McCain's risk for developing a new melanoma is less than 10 percent, though she declined to put a specific number on the risk. Over the years, McCain has had numerous other less-serious skin cancers and growths removed.

Eckstein noted that it's been eight years since McCain's major bout with melanoma on his left temple. As time goes on without a return of disease, the odds of recurrence diminish even more, he said.

As for the puffy appearance of McCain's left jaw, Dr. Michael Hinni of Mayo said that it did not signal a return of melanoma, but rather was the remnant of the extensive operation to remove the melanoma in 2000. "To be clear, the swelling is not due to any evidence of cancer," he said.

The puffiness is the result of the removal of soft tissues surrounding the tumor in front of the left ear. "That makes the masseter, the chewing muscle, over the jaw appear more prominent," Hinni said.

The 2000 tumor was the most significant of McCain's four melanomas. It was 2 centimeters in size and 2.2 millimeters thick. Its removal left a wound that was 6 centimeters by 6 centimeters, Hinni told reporters.

Surgeons typically try to remove enough tissue around a tumor so that all parts of the cancer are excised.

The operation also involved the removal of the parotid salivary gland and 33 lymph nodes in the senator's neck. No evidence of cancer was found in the lymph nodes, according to the Mayo physicians.

The 2002 melanoma was very small and at a very early stage, Eckstein said. It was located on the left nasal sidewall.

The records shown to NPR and other media revealed that since 2000, the senator has had kidney and bladder stones, causing pain and blood in his urine. The bladder stones were removed and the kidney stones present no ongoing problems, according to McCain's doctors.

In 2001, McCain underwent surgery for an enlarged prostate, a very common condition in men his age. The treatment was routine.

During a colonoscopy two months ago, McCain had six small polyps removed. All were benign.

The Arizona senator has complained to his doctors on numerous occasions about dizziness and was ultimately diagnosed with vertigo, which is not thought to be related to anything serious.

Heart stress tests performed over the past eight years have shown no abnormalities and have changed little, showing that McCain is in good physical condition.

There was nothing in the records regarding mental health. When McCain last released his medical records during a 1999 bid for the presidency, documents showed that his doctors had concluded that his years in prison during the Vietnam War had not had a lasting psychological effect.

In response to a reporter's question, Eckstein said there was no evidence of memory loss in the senator, though the records did not appear to contain any indication that McCain had undergone mental status or cognitive testing.

McCain is taking several medications considered normal for a 71-year-old man. These include a cholesterol medication (simvastatin), a baby aspirin to prevent heart disease, a diuretic to prevent kidney stones from returning and medications for occasional nasal allergies.

McCain also uses a sleeping medication (Ambien CR) when he needs it, along with melatonin to fight jet lag. He takes a multivitamin each day.

The McCain campaign restricted access to the documents to selected news organizations. NPR's Joanne Silberner was one of the reporters allowed to review the documents.