Accessibility links
Urban Verbs: Back for One Night Only In the late 1970s, D.C.-based band Urban Verbs was destined to be the "next big thing." However, after two albums, Urban Verbs was dropped from its label. This weekend, the band reunites for one show only at the 9:30 Club. Guy Raz speaks with the original members.

Listen
Urban Verbs: Back for One Night Only 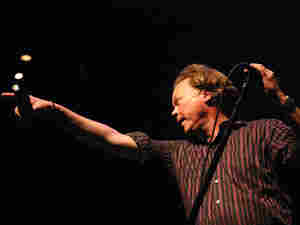 In the late 1970s, D.C.-based band Urban Verbs was snapped up by a major label to become the "next big thing" in the burgeoning New Wave scene. It was a demo tape produced by Brian Eno that got them the attention of Warner Bros. However, after two albums, the label unceremoniously dropped Urban Verbs and the band broke up soon thereafter. This weekend, the band reunites for one show only at the 9:30 Club. Guest host Guy Raz speaks with the original members.

Hear the concert below. 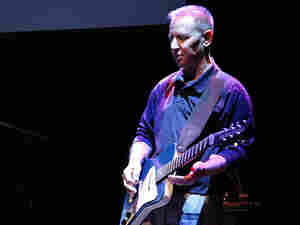 Advisory: This live concert recording contains language that is not appropriate for all audiences.

Hear the profile of Urban Verbs from 'All Things Considered.'

Urban Verbs changed my life. If it weren't for this band, there may not have been a 9:30 club (where All Songs Considered webcasts many of its live concerts) and I surely wouldn't have made it to NPR. So, it seems fitting to include the Urban Verbs reunion performance in our concert series.

Urban Verbs were a band in my hometown of Washington, D.C. in the late 1970s. I saw their first performance at a restaurant called The Atlantis. That restaurant would eventually become the now-famous 9:30 Club (The Atlantis switched to being a music club after Urban Verbs convinced them to host the band's first live show). I saw just about every concert Urban Verbs played in D.C. or nearby cities; they were that good. But let me put it in perspective.

Back in 1978, except for the occasional progressive rock group, most bands playing the D.C. bars and clubs were fairly straight rock and roll bands. Many were blues-based. Urban Verbs stood out because they were an art band, but they were an art band that rocked. Their music wasn't overly angular or too abstract. Robert Goldstein's guitar, wildly affected through a looping device called an echoplex, and Robin Rose's Arp Odyssey gave an ethereal texture to their sound. The wash they created was hypnotic, sometimes psychedelic and always original.

Then there was the solid bass playing of Linda France and the remarkable drumming of Danny Frankel, the only drummer to consistently get me dancing. Danny is still one of the best drummers I know. Tasty and potent. Roddy Frantz wrote great poetry and always sang with passion.

There is a spirit and sound I'll hear in some bands making music today that reminds of what the Urban Verbs were doing so long ago. I'm curious how it will hold up when the Verbs play their first live show in a quarter of a century (sorry to put it that way guys).

Through a few connections (Roddy's brother Chris drummed for a band called The Talking Heads), but ultimately because of their talents, Urban Verbs got a contract with Warner Brothers. They had a short run with the label, and for a while it looked like Urban Verbs might make it big. But one negative review in Rolling Stone magazine helped put an end to it all.

If it weren't for Urban Verbs I may never have started playing music. And it was an All Things Considered story about my music that eventually got me to NPR. More importantly, the band created a scene in Washington, D.C. and formed a community of friends that meant so much to me for so long.

Think about the bands that make music now and the friends you have that revolve around the music you love. Know that 25 years from now it may still resonate, it may still matter. It's true for me, and I love that.