Do It Yourself "Sweet and Low"

Augustana has issued a challenge to its fans: Sing a cover version of "Sweet and Low" and post it on YouTube. See some of the results below.

Members of the band play an acoustic set in Studio 4-A. 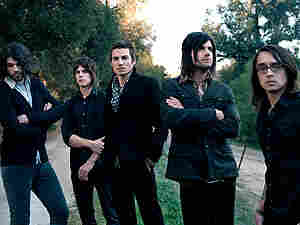 The television show Scrubs helped propel Augustana into popularity when it used the band's song "Boston" in one of its episodes. Courtesy of the artists hide caption

Four years ago, a couple of friends dropped out of their small Midwestern college and went to San Diego. They wanted to make it big in the music industry. The band Augustana has been touring almost nonstop ever since.

The group has released their second album, Can't Love, Can't Hurt. The single is called "Sweet and Low." Three of Augustana's band members--frontman and singer Dan Layus, guitarist and vocalist Chris Sachtleben and singer John Vincent--joined NPR's Ari Shapiro in Studio 4A to play music from the new record and talk about the surprising success the group is enjoying.

Layus, the band's main songwriter, says that even though the song "Sweet and Low" was put together over a period of time, it's fluid, simple and to the point.

"When I was writing the song I was thinking of some things my wife would say to me, like when I'm on the road or when the storms come. The moral of the story is that through the peaks and valleys of a relationship—of love—having that person there through all those times is important, and at the end of the day that's all that really matters."

The song has taken on an alternate life on the Internet. Augustana's Web site has a contest, asking people to record a cover version of "Sweet and Low" and post the video on YouTube. Dozens of people, some better than others, have taken up the challenge.

"It's a weird thing, actually," Layus says, tongue-in-cheek. "We weren't really too crazy about the contest. The song has only been around for two months, I don't know if I want somebody to outdo us. Somebody could step it up above our level of talent."

Augustana was propelled into pop consciousness partly thanks to television. The band's single "Boston," from their first album, caught fire after it popped up months later on the NBC sitcom Scrubs. Suddenly everyone knew who Augustana was.

"There are so many people trying to get that spot on Grey's Anatomy and that same spot on Scrubs," Layus says. "There are probably a million bands gunning for that. It's really difficult to rely on a certain timeline for the way that a song is going to rise and fall. Fortunately for us, the song held up long enough to let us tour for three years. It slowly traveled along at 60 miles an hour; it was never in the fast lane, but it was just cruising and it made its way down the road."

That Layus dropped out of college to pursue rock and roll is appropriate for a pop star's resume. What is more out of the ordinary is Layus' Christian education and upbringing. For a time he studied contemporary Christian music in college. That time, or at least that state of mind, is not something Layus talks much about or is particularly proud of.

"I was too young to understand anything, and I almost feel like I was spiritually taken advantage of. Throughout high school I did a lot of things that I'm ashamed of now. I was so closed-minded at the time, but I guess it's hard to blame yourself when you're only 15 or 16, when your parents and everyone around you is saying this is how it is."

Layus was still in that state of mind when he enrolled in a private Christian college. But eventually, he says, life started happening.

"Finally I started seeing things a little more clearly. And part of that journey was going to a school like that and hooking up with friends who were feeling the same way. Things have changed, and I've completely abandoned that way of thought. A lot of things have happened in my life as far as being married and having a daughter. Being on the road for 3 1/2 years makes the world a lot more real."

Layus may have left his traditional religious roots behind, but the passion and drive he had in those years has carried over into his songwriting.

"I have a more positive and realistic place to put it now," Layus says, "which is my wife and my daughter and our music. And writing songs and being able to love my family like that, is more than enough for me."