Accessibility links
'The Boat' Takes Readers Across the World Nam Le's The Boat is a collection of short stories loosely based on Le's own experience as a writer. The book takes the reader from the South China Sea to Bogota to Tehran and Beyond. He talks with Guy Raz about writing from experience and creating fiction through research.

Listen
'The Boat' Takes Readers Across the World

Nam Le's The Boat is a collection of short stories loosely based on Le's own experience as a writer. The book takes the reader from the South China Sea to Bogota to Tehran and Beyond. He talks with Guy Raz about writing from experience and creating fiction through research.

"The Boat" is author Nam Le's first book. It's a collection of short stories that takes the reader from the South China Sea to Mehdain(ph) in Colombia to Tehran and beyond. Places that, in many cases, Nam Le has never even visited. He created this world over four years, some of that time hunkered down in a farmhouse in Iowa City.

Twenty-nine-year old Nam Le was born in Vietnam, raised in Australia and now spends most of his time here in the United States. He joins us from Amherst, Massachusetts. Nam Le, welcome.

NAM LE: Thank you. Thanks for having me.

RAZ: The first story in your book is called "Love and Honor and Pity and Pride and Compassion and Sacrifice."

RAZ: Would you read a bit of it for us?

Late at night I plugged in the Smith-Corona. It hummed with promise. I grabbed a bottle of Scotch from under the desk and poured myself a double. I had two- and-a-half days left. I would write the ethnic story of my Vietnamese father. It was a good story. It was a great story. I fed in a sheet of blank paper. At the top of the page I typed ethnic story in capital letters.

RAZ: In this first story the narrator is a Vietnamese-born author from Australia. He was studying at the famed Iowa Writers Workshop. His name is Nam Le, and yet you've written a work of fiction. Why did you choose to start the book with this story?

LE: I guess this story is a provocation of a kind. The main character has my first name, hast a lot of my circumstances and is dealing with a lot of the questions that I'm dealing with in my writing. But I guess the question that I'm throwing out of the reader is would it make a difference if you knew that this was true or not true or half true? And if so, why?

RAZ: So, we'll never really know if it's you?

LE: I think even were I to write a memoir or a story that I showcased as non-fiction, I still think you couldn't be sure that that was me. I wouldn't be sure myself.

RAZ: This character is very much at war in a sense with his ethnicity, or at least writing about his Vietnamese Australian heritage. Is that something you struggle with?

LE: Absolutely, yeah. I think the story is in some senses a testament to that very struggle that I (unintelligible). You know, what am I allowed to write about, what am I obligated to write about and why am I reluctant to write about certain things. And I think that speaks more deeply to my resistance as a writer or any writer as being pigeonholed or having a set of things that they can write about being circumscribed in any way whatsoever.

RAZ: And, Nam Le, not all the stories in the book are about you or an alter ego. In fact, the first story is the only one. One of my favorites is called "Tehran Calling." Can you tell us a little bit about that story?

LE: That story is about a middle-aged professional American woman, a lawyer, working in Portland who has just come out of a terrible love affair and is very depressed and is seduced, in a sense, by her best friend who is now in Tehran as a revolutionary (unintelligible). She's agitating for women's rights reform.

So, Sarah Middleton, who is protagonist, confronts a lot of assumptions and ideas about her own life and also what her friend is doing.

RAZ: Can you read a passage from that story for use?

LE: Sure. Royal was wrong. It was Paul who had broken her heart; her heart had come already impaired. From the beginning she had led a life of what seemed to be self-maintenance. She had calibrated herself to be above average in all the average ways - writing down the hours, the feasible commitments, the ready consolations of work and sleep.

She'd built her life elegantly around convention, conventional aspiration, conventional success, and was continually astounded that no one saw through the artifice, no one recognized Sarah Middleton as all false work and nothing within.

Part of the challenge of this story was to get into the mind and the consciousness of this woman. And it was something, which I found resonated very much with my past as a lawyer and also a lot of people who were professionals. The idea that you can, you know, do everything right and yet feel some sort of missing constantly in your life.

RAZ: Nam Le, what struck me about this story was how vivid the imagery of the city of Tehran appears. The Shiite (unintelligible) procession with a self- flagellation. The rutted roads you talk about, the stale fluorescent lighting of the airport. Have you ever been to Tehran?

LE: I have not been to Tehran, no.

RAZ: How do you write so convincingly about these places that you've never been to?

RAZ: How important is it to make it really authentic?

LE: I always try to adhere to the idea that what I'm doing is not getting it right. That's not my charge. My charge is to do it justice. And so I'm sure there are details, which are wrong or which might be in error. But essentially where I'm working from is an idea that there's no place which is not foreign to us.

There's no detail about a place that is either necessary or sufficient to get that place right. And when it comes down to it, you can't really separate a place from the mind through which that place is being seen. And so for me it's an idea of trying to really capture the essence of the place; it's really trying to convince the reader that they're there and they believe it rather than, you know, getting a list of facts right.

LE: You know, I don't worry about that. And it's - I mean, I come from a legal background, for example, and the testimony that carries the most weight is eyewitness testimony. And there are so many studies that show that what one person sees and believes in fervently is so often different to what someone else has seen and so different to what someone might remember one week, two weeks, two years, you know, 20 years ago.

And I had to believe that the subjectivity through which we see things is the most important part of the things that's being seen.

LE: I sort of work backwards to tell you the truth. I spend a lot of time auditioning voices, for example, and trying to find a voice that can carry the full load of what I would like to communicate in a story. And so a Portland lawyer or a Colombian teenager, I really try to find a voice and an idiom and a rhythm that can contain the eloquence that they need, can make their case convincingly and also that somehow feels absorptive of the place and inextricable from the story being told.

RAZ: Before we let you go, Nam Le, I wanted to ask you to read your favorite passage from your book, "The Boat," and to tell us a little bit about it.

LE: I think I'm going to read from "Half Lit Bay." And it's set in Australia, and it's the end of a passage wherein the protagonist flashes back to an old fishing trip with his parents and he's walked out to the same pier where the flashback occurs with a girl who is his love interest.

It was a dream. Last night has been a dream. Her skin moving against her ribs, so think over her body he could see the laddering of it. She rocked above him, coaxing her face out of the shadows, the star-drenched sky reeling. I got you, he said when she slipped. Now, in the shock of early morning, he was wrenched back into his body, the rocks slimy with musks(ph), the water ice cold and molecular.

Late in the night there'd be thunder and heat lightning. All night it had felt like it was minutes away from raining but it hadn't rained. Already you could feel the day hotting up again. From some dark crevice the smell of a dead animal rank and over-sweet.

That evening there'd laid the girl on water and it was worn out, mutilate, into the gray drift. For hours every time he'd looked back he'd seen other girls, dozens of them, circling in a silent gyre, making black shapes out of themselves in the dusk sky. Then the light had failed.

Here, he thought. He stood up at the soreness returning to him all at once. Here is the saddest place I know.

RAZ: Nam Le reading from his collection of short stories titled "The Boat." Nam Le, thanks so much for talking to us.

LE: Not at all. Thank you for inviting me. 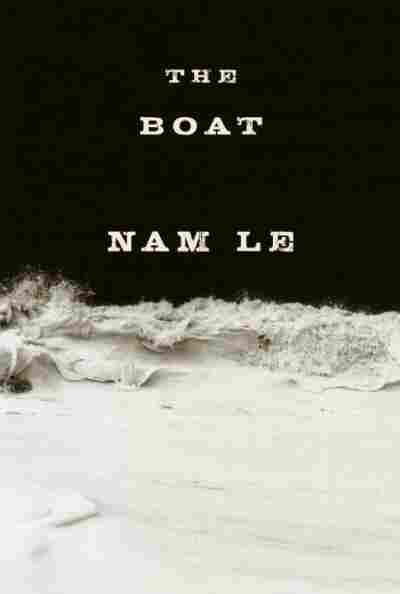