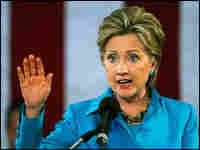 In a conversation last week with a newspaper in South Dakota, Sen. Hillary Clinton said that among the reasons she's remaining in the race for the Democratic presidential nomination is the legacy of Robert F. Kennedy's assassination.

It's a comment that drew rebuke from the media and challenger Sen. Barack Obama's campaign, but as Politico.com's Jim VandeHei says, Clinton stuck to her guns, vowing to campaign well into June.

"My husband did not wrap up the nomination in 1992 until he won the California primary somewhere in the middle of June," Clinton told the newspaper Friday. "We all remember Bobby Kennedy was assassinated in June."

That reference to Sen. Barack Obama's vulnerability drew sharp rebuke, with media reports suggesting that Clinton's comments improperly made light of an already sensitive topic. That topic is the security needs of one of the country's first significant African-American presidential candidates.

But VandeHei says that even if Clinton came off poorly, she was just trying to suggest that significant turnings points, even tragic ones, can happen late in the campaign.

"That's what people think she's thinking in private," VandeHei says, referring to the parlor game of guessing Clinton's logic for remaining in a campaign that for her is such a long shot. "It was not intended to be as mean-spirited and icy and cold as it sounds."

Meanwhile, On a Ranch in Arizona

"This will be our new obsession for the next couple of months," VandeHei says. As for this first round of guessing, VandeHei says McCain probably has a much longer list than Romney, with whom chemistry has been absent, and Jindal, who is just 36 years old, making McCain's 71 years seem rather grandfatherly. VandeHei adds the fact that Republicans think McCain is a lock for Florida against Obama, so Crist's viability is in question.

"I think both candidates are going to take a long, hard look at doing something unorthodox," VandeHei says. One name McCain and Obama alike are rumored to be considering? "You hear Michael Bloomberg talked about for both tickets."