Accessibility links
School in Session in China Tent City The May 12 earthquake that devastated southwestern China left millions of people homeless. In An county, students whose schools were destroyed are attending class in a tent, taught by an English teacher who lost his family in the quake. 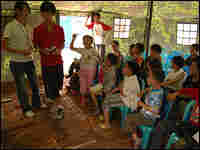 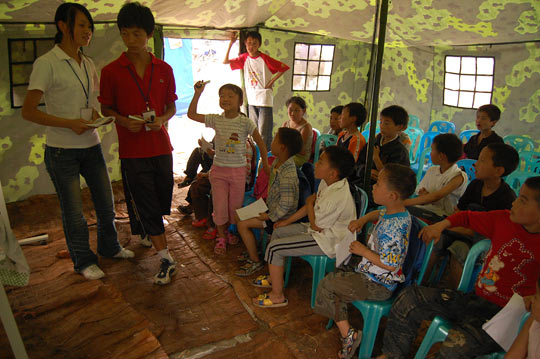 High school students Li Xueyan and Li Fan lead a class of children in grades one through six. 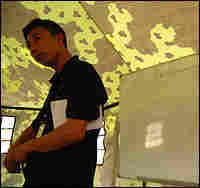 English teacher Zhang Xiaoyong lost his wife and daughter in the quake. He says he wants to take care of the children who did survive. Andrea Hsu/NPR hide caption 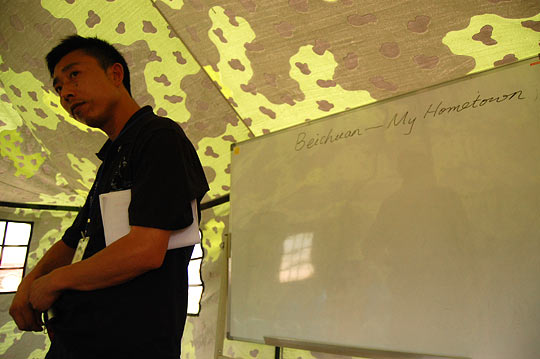 English teacher Zhang Xiaoyong lost his wife and daughter in the quake. He says he wants to take care of the children who did survive.

Two weeks after a huge earthquake rocked southwestern China, claiming more than 65,000 lives, another powerful aftershock hit the region Sunday, toppling tens of thousands of homes. Millions of people in southwestern China are homeless, so the government has set up tent cities. In An county, school was in session in one tent.

Five rows of small plastic chairs and a white board are all the furnishings this one-tent school has at the moment. And at first, it's hard to tell the teachers from the students.

Local officials enlisted two high school students, Li Xueyan and Li Fan, to lead a class of children from grades one to six.

Li Xueyan reads a fable from a small storybook — there are no textbooks. A few of the kids listen attentively, but most of them goof off. Li Fan says the point of school right now is to teach the kids how to relax and have fun.

These two 17-year-old teachers look as if they themselves could benefit from such a class. Li Xueyan's school in Beichuan county collapsed in the May 12 earthquake. She was in PE class outdoors at the time.

"When I'm with the kids, I feel relaxed too," she says.

The older kids in this camp are taught by an actual teacher — an English teacher. Zhang Xiaoyong's lesson for today is "Beichuan, my hometown."

"Beichuan is a very beautiful place, is that right?" he says. "Beautiful." With beautiful mountains, rivers, villages and schools, he adds.

Student Zhu Huaming chimes in with what he likes about his city: "At school on Saturday afternoons, I play ping-pong with my classmates."

When no one else speaks up, Zhang offers this memory:

"Over the May 1 Labor Day holiday, we had two days of vacation, remember?" he tells the class. "I took my wife and daughter to Mianyang for the weekend. My daughter really loves eating at Kentucky Fried Chicken. It was a really good time.

"Before the earthquake, we had a very happy life ... but today we have some difficulty," Zhang says.

"I think we should have hope for the future because our government is showing us great love and care," he adds.

And in this tent city of 1,500 people, there is one last phrase to learn. "To help others is to help ourselves," he says. The students repeat the phrase.

After class, Zhang reveals what that phrase means to him.

His wife and 9-year-old daughter both died in schools that collapsed. He says their bodies have not yet been found. He's heard that more than half of the 3,000 students and teachers at his school also died in the quake.

"The children that are still with us ... I want to take care of them as I would my own child, my own wife," he tells a reporter. "I want those of us who survived to be able to live a better life."

With a Backdrop of Aftershocks, Rice Planting Begins May 25, 2008
China Adds Counseling to Earthquake Relief Efforts May 22, 2008
No Home Away from Home for Quake Evacuees May 21, 2008
Quake-Weary Chinese Take Life to Tents May 21, 2008
Shoddy Work, Leadership Blamed in School Collapse May 15, 2008