Accessibility links
How to Help the Planet by Buying a Hummer Cut down those old trees, scrap that organic milk, embrace nuclear power: Wired contributing editor Spencer Reiss explains why winning the war on global warming means slaughtering some of environmentalism's sacred cows.

Listen
How to Help the Planet by Buying a Hummer 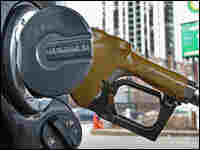 Gassing up a Hummer in Chicago, where a gallon of regular is $4.59. Scott Olson/Getty Images hide caption

"In this world, you can't have everything," Reiss says. His cover story makes the point that when people make decisions about the way they live, they should ignore the prevailing fashions of the day and make choices that, in the details, make the most sense for their individual needs. "You've got to make smart choices."

For one example of a broad societal decision that didn't make much sense, Reiss points to the on-again, off-again position of nuclear power in the American psyche. For years, he says, people were deeply opposed to nuclear power of any kind. As a result, the power industry responded by building coal plants. "Now we have massively more greenhouse gases than if we'd built nukes," Reiss says. It's an equation that, had people known what would happen, might have meant more cooling stacks on the horizon.

In their own, smaller life decisions, Reiss encourages people to cut through the hype and focus on the details. Take Hummers, he says. "Lots of people like to drive around in their little Prius," Reiss says, referring to a not necessarily wise group he calls "Pious" drivers. The thing is, he says, "A mom in her Hummer with six kids — on a per person basis — is actually doing much better. A lot depends on what you do with the car."

"Everything thinks, 'Oh, I bought the Prius, end of problem,' " Reiss says, while, in fact it is used cars that are probably the best green car purchase. Reiss says that not only is the world champion gas saver still the 1984 Honda Civic, but buying an old car saves the world all the carbon it takes to build and ship that new hybrid.

Food is another source of good intentions foiled by fashion. "People think, 'Oh, I'm going to eat organic lettuce,' " says Reiss, but such people also eat that lettuce in New York City, in January. "It either has to be shipped in a very long distance or it has to be grown in a greenhouse, which is kept warm with natural gas."

If you really want to eat green, Reiss says, your best bet is often to eat what's been grown locally. "The answer is not much," Reiss says. "Get used to potatoes and turnips."

Is There Any Reason for Hope?

Reiss' prescription isn't all debunking and negativity. He's a big fan of a recent quote from a David Pogue article in which that New York Times writer castigates those who obsess over the idea that an extra hour listening to their iPods each day will help melt the snows of Kilimanjaro. "It won't," Reiss says.

Instead of obsessing, Reiss and his colleagues encourage people to be optimistic about the future. "We believe there are technological ways to have your cake and eat it too," Reiss says. "The world isn't engineered right now with carbon reduction in mind. It's engineered for efficiency and cost reduction."

That can change, he says. "We're talking very long-term systemic stuff, moving, say, to electric cars," Reiss says. "There are ways to devise a world that is fun and you can take half-hour showers if you want to and not ruin the planet."