Accessibility links
Sly Stone: After the Last Hurrah By the time 1974's Small Talk came out, Stone was viewed as a has-been — a young, brilliant innovator burnt out by drugs and megalomania. A fresh visit to Small Talk, though, counters that assessment, as evidenced by the wry "Wishful Thinkin'."

Sly Stone: After the Last Hurrah

Sly Stone: After the Last Hurrah 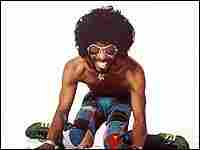 Sly Stone had a few moments of brilliance after his drug-induced decline. hide caption

By the time 1974's Small Talk came out, Sly Stone was viewed as a has-been — a young, brilliant innovator burnt out by drugs and megalomania. As a significant architect of funk, he was still revered by music heavyweights such as Miles Davis and Herbie Hancock, but he'd been mostly succeeded by the comparatively clearheaded funk of Stevie Wonder, The Isley Brothers and Earth, Wind & Fire. To this day, most critics argue that 1973's Fresh marked Stone's last great hurrah.

A fresh visit to Small Talk (which gets the reissue treatment next month) counters that assessment, as evidenced by the wry "Wishful Thinkin'." Judging from the album's cover — on which Stone posed with his new bride Kathleen Silva and their newborn son — he was attempting to move away from the nightmarish lifestyle that helped spawn 1971's menacing masterpiece, There's a Riot Going On, in favor of a family life.

Amidst a spectral string arrangement, an indolent bass line and elliptical guitar noodling, "Wishful Thinkin'" finds Stone in an autumnal fog as he coos a cautionary tale about the dangers of reckless living and impatience. "Wishful thinkin' / trying to bear the cross," he sings. "You can't outsmart the boss / Don't let it be the end of you." An unsung gem, "Wishful Thinkin'" illustrates that Stone still had fleeting moments of brilliance after his glory years were behind him.