Accessibility links
Athlete Tries Hypnotism in Quest for Olympic Gold U.S. shot-putter Adam Nelson, a two-time Olympic silver medalist, is willing to try anything — legal — to win gold at this summer's games in Beijing. That includes sports hypnotherapy, in which he visualizes success in the shot-put circle. 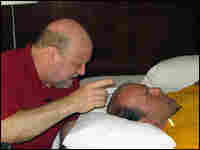 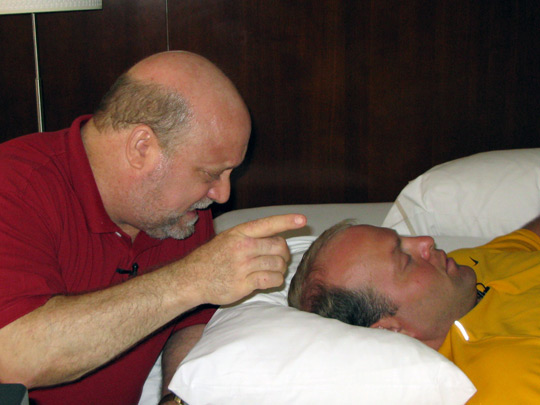 Pete Siegel leads Adam Nelson through what he describes as a "deep and profound sensory comprehensive subconscious power experience."

U.S. shot-putter Adam Nelson, a two-time Olympic silver medalist, is willing to try anything — legal — to win gold at this summer's games in Beijing.

Even the occasional "deep and profound sensory comprehensive subconscious power experience." At least, that's how sports hypnotherapist Pete Siegel described a session he had with Nelson earlier this month in Southern California.

Siegel hypnotized Nelson as the 6-foot, 265-pound athlete stretched out on a bed at the Westin hotel in Long Beach on the day before his first big competition of the outdoor season. The session got more and more intense, with Siegel leading Nelson through a powerful, imaginary throw.

After nearly 40 minutes, Siegel pulled Nelson out of hypnosis. Nelson was quiet, but he said he felt great.

Siegel, an "Energizer Bunny" of optimism with a thick, bodybuilder's physique, was amped up.

"This year, I'm going to put my ass on the line and tell you he's going to win the gold medal," Siegel said. "Why? Because all the experience he's been through. All the training he's done. And now he knows himself at a level to where he can access the full degree of power that he knows he possesses."

Nelson believes in Siegel's program of deep, sensory visualization. But on that weekend of the Adidas Track Classic, Nelson laughed when Siegel made his gold-medal prediction. Not because he doesn't believe it, but because he knows there's a long way to go.

Nelson said he was throwing at about 80 percent of his abilities because of recent disruptions: His wife left town for a summer internship; he changed his throwing technique; and, more immediately, the cross-country trip to California took a toll on his raging metabolism, thanks to a skimpy diet of airline peanuts.

"I mean, I think I probably lost seven pounds on the trip out here," he said. "I felt really skinny."

By the day of the track meet, Nelson had reclaimed his weight, thanks to six full meals the day before. He had breakfast before the meet with two fellow shot-putters, Dan Taylor and Christian Cantwell. They were friendly and talkative, but that will change as they get closer to the Olympic trials at the end of June, where only three shot-putters will qualify for Beijing.

"The next five weeks, with what's on the line, will challenge any friendship because it's really them or me," Nelson said. "And in that situation, it's really hard to always be a good friend."

Nelson trailed Cantwell through the six rounds of the Adidas competition. On his last throw, Nelson went through his usual, hopped-up pre-throw routine. Then, he walked out into the grassy area where the shot landed (called the sector), ripped off his top shirt, flung it to the side and stormed back to the circle to throw with a big scream.

The throw was his best of the competition: 69 feet, 4 inches. But he finished second to Cantwell — and he wasn't too happy about it.

"I'm really quite grumpy right now," he said as he walked to the bus that would take him back to his hotel. "I think the lesson here is I really need to refine my schedule and develop my routine. Because ... right now, I'm just not feeling very sharp or crisp."

Still, as the ever-positive Siegel pointed out, 69 feet, 4 inches is pretty good when you're at 80 percent effectiveness. He predicts Nelson will throw more than 71 feet at a meet this weekend in New York — on the way to that ultimate power experience in China.

Watch as Nelson participates from Virginia in another hypnotherapy session with Siegel on the telephone.