Accessibility links
Ladies Got Game: What a Year for Women in Sports Danica Patrick was in the running to win the Indianapolis 500. Lorena Ochoa — not Tiger Woods — is the most dominant force in golf. It's been a remarkable year for women in sports.

Listen
Ladies Got Game: What a Year for Women in Sports 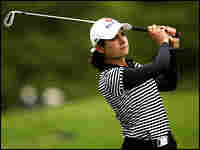 Top-ranked Lorena Ochoa hits a shot during the final round of the Sybase Classic on May 18, 2008, in Clifton, N.J. Travis Lindquist/Getty Images hide caption 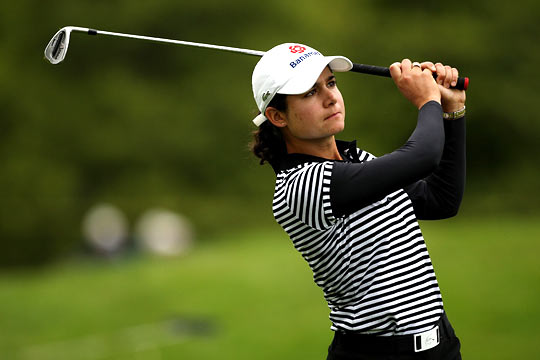 Top-ranked Lorena Ochoa hits a shot during the final round of the Sybase Classic on May 18, 2008, in Clifton, N.J.

I was certain Danica Patrick was going to win the Indianapolis 500 Sunday. Just positive. After all, 2008 is a year when, surely, women have been more prominent in sports than ever before — and in every way: good, bad and sad.

Danica herself, of course, had already become the first woman to win an open-wheel race, which must have astonished the fatuous Bernie Ecclestone, the head of Formula One racing, who had declared earlier that "women should be dressed in white like all the other domestic appliances."

Justine Henin and Annika Sorenstam made headlines for retiring prematurely, but there are big headline names still playing in their sports. Lorena Ochoa — not Tiger Woods — is the most dominant force in golf in 2008. As the French Open moves along, Maria Sharapova and Serena Williams have not only risen again to the top but are both glamorous global celebrities who make the mainstream columns — Maria for her elegant beauty, Serena for her exotic attire.

Of course, a lot of women in sports are upset that too much attention is still paid to the way female athletes look and dress, but the reality — fair or not — is that culture pays more attention to women's appearance. To pretend to avoid that fact in sport is ridiculous.

As Danica Patrick told me about posing sexily for a men's magazine: "It didn't change my talent. It didn't make me any less of a driver."

It did make her more famous.

And hey, what's become the meanest rivalry in sport? Red Sox-Yankees? Fuhgeddaboutit. It's women's basketball — Pat Summitt of Tennessee and Geno Auriemma of Connecticut. OK, Geno is a man. Technicality. He's a women's coach. Summitt has already called off their regular-season series, so if UT and UConn face each other in the NCAA championship next year, that would be a real grudge match and the biggest women's game in history, any sport — and a lot more interesting than anything the men could put up in their Final Four.

It was the death of the filly Eight Belles — and not the colt Barbaro — that has really provoked the most searching look at the way horse racing is conducted. And I think that the imprisonment of Marion Jones is as tragic as any in the sports realm of oh-how-the-mighty-have-fallen. Somehow, her disgrace is more poignant than the sagas of Shoeless Joe or Pete Rose or Mike Tyson. There was something so classically, sadly representative of all those feminine dramas of lore: the beautiful and talented and ambitious woman who picks all the wrong men ... or has all the wrong men pick her.

And then, back to Danica. She didn't have to be the standard-bearer for womanhood and beat the men at Indy, because on Dancing With The Stars, Kristi Yamaguchi was a rare female winner, upsetting the top male athlete, that handsome NFL hunk, Jason Taylor.