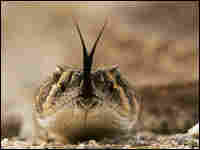 Scientists aren't sure why Arizona is seeing an increase in deaths caused by rattlesnake bite, but reptile expert Russ Johnson says changing state demographics have helped bring vulnerable new human communities — many of them retirees — face to face with the viper's deadly venom.

Johnson, president of the Phoenix Herpetological Society, dismisses as rumor the idea that rattlesnake venom in Arizona has increased in potency. "This thing started on a Yahoo venom listserv," Johnson says. "I talked to four experts, and none of them has given any credibility to this issue at all."

Instead, Johnson says that a number of the bite victims are transplanted retirees unfamiliar with rattlesnake safety. "They get to hiking, or they love gardening" — activities where snakes are plentiful, Johnson says. And because the older Arizonans are more frail, "They're at a higher risk [of dying] than other demographics."

Johnson says developers in Arizona are striking deeper and deeper into the desert. Add to that, he says, the fact that for the past three years the region's gotten "pretty decent water," leading to bigger grass crops and thriving rodent populations. "Odds are you're going to run into [a rattlesnake] because of the high survival rate over the last few years."

What Happens When Snakes Strike?

You do not want to get bitten, says Johnson, who even as an expert handler has suffered rattlesnake fangs twice. The more severe bite occurred during a routine lab blood extraction. Johnson says he had a rattlesnake partially immobilized in a special plastic sleeve, but he then realized the snake's head could still move freely. Before he knew it, the snake had latched onto his finger.

The pain, Johnson says, was like being electrocuted and burned at the same time. Over two days at the hospital, he says he slept for a total of five minutes; the excruciating and shifting pain cut right through the high-octane medication. As the venom flowed through his body, he says, he could even pinpoint exactly where it had flowed.

"I've broken eight bones, and I'd rather break all eight again than get bitten," Johnson says.

As for how to respond to a bite, Johnson has a definitive take on the matter of to suck or not to suck out the venom: "Absolutely not." Instead, he says, be responsible. Check out advice on reptile encounters from the herpetological society.