Accessibility links
Vicente Fox on U.S. Immigration Former Mexican President Vicente Fox discusses Mexico's war on drugs, the alarming number of young women in the country whose murders remain unsolved, and why he takes issue with U.S. border fences. Fox also weighs in on the race for the White House. 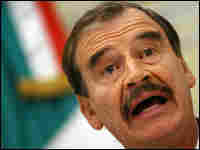 Former Mexican President Vicente Fox offers his views on drug violence in Mexico, the unsolved murders of young women in Ciudad Juarez, and America's handling of the immigration issue. Fox also weighs in on how the presidential campaign in this country has affected immigration politics, and explains why he disagrees with the Bush administration's effort to build a fence along the border.