Accessibility links
How Clinton Shifted on Michigan, Florida Delegates Sen. Hillary Clinton once supported the Democratic National Committee's decision to punish Michigan and Florida for moving the date of their primaries. Now she says that not counting the votes violates the spirit of the Democratic Party. 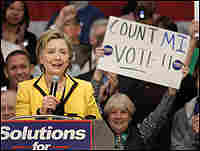 Sen. Hillary Clinton holds a "Solutions for America" event in Detroit on March 19. Clinton came to Detroit to try to generate support for a do-over of the Michigan primary. Bill Pugliano/Getty Images hide caption

When Michigan and Florida moved their primaries ahead of the dates set by the Democratic National Committee, New York Sen. Hillary Clinton supported the party's decision to strip those states of their delegates.

Democratic Party officials are meeting this weekend to decide the fate of those delegates, and Clinton's campaign has been pressing to get at least some of them back. Clinton won both states, and having delegates reinstated would help her numbers.

But the senator's position on the delegate issue has shifted over time.

In September 2007, the crowd of Democrats running for president signed a pledge not to campaign in Florida or Michigan. The Democratic Party had punished those states for shifting their primaries and diluting the importance of early-voting states such as Iowa and New Hampshire.

At the time, Clinton was the front-runner, and she signed the pledge. Most candidates, like Illinois Sen. Barack Obama and former North Carolina Sen. John Edwards, went so far as to take their names off the ballot in Michigan. Clinton left hers on the ballot. During an interview on New Hampshire Public Radio, a caller asked Clinton what was up.

"Now, just this week most of your Democratic competitors removed their names from the Michigan primary ballot. But you didn't, and my question is why?" said the caller, who identified herself as Elaine. "It strikes me as this is politics as usual, where the politicians say one thing and they end up doing something else."

Clinton responded that she stayed on the Michigan ballot because she didn't want to totally dismiss voters in an important swing state.

"It's clear this election they're having is not going to count for anything," Clinton said. "But I personally didn't want to set up a situation where the Republicans were going to be campaigning between now and whenever. Then, after the nomination, we have to go in and repair the damage to be ready to win Michigan in November 2008."

But really, Clinton said, leaving her name on in Michigan wasn't a big deal.

"I personally did not think it made any difference if my name was on the ballot," she said.

Clinton won the Michigan's Jan. 15 primary — with the caveat that her rivals' names didn't appear on the ballot.

No longer the front-runner, she needed every state she could get.

By the time Florida voted Jan. 29, Clinton was making the case that votes in the Sunshine State mattered. It helped her win Florida, and her campaign began a full-scale effort to get Michigan and Florida's delegates counted.

As for Clinton's earlier comment about Michigan and how being on the ballot didn't matter? By March, she was telling NPR it did matter.

"We all had a choice whether or not to participate in what was going to be a primary. Most people took their names off the ballot. But I didn't," she said.

The change in strategy has given Clinton's campaign some explaining to do. That job has gone to Harold Ickes, a top Clinton adviser. Ickes also sits on the Democratic Party's rules and bylaws committee — the body that approved stripping the delegates in the first place and will take up the delegate question this Saturday. He told reporters last week that the point of punishing Florida and Michigan was to scare other states out of moving up their primaries.

"We think that message was received, listened to. No other state broke the window," Ickes said.

Now that the dates are no longer an issue, Ickes said, it's time to make sure that Florida and Michigan voters do not feel discounted in November's general election.

Meanwhile, Clinton's delegate argument has taken a new tack. Last week in Florida, she spoke of how women and African Americans fought for the right to vote. The voice of the people should never be disregarded, she said.

"We're seeing that right now in Zimbabwe," Clinton said. "Tragically, an election was held. The president lost. They refused to abide by the will of the people, so we can never take for granted our precious right to vote."

The Clinton campaign's best hope is that a compromise by the party on Florida and Michigan could bolster her argument that her popular-vote wins in Michigan and Florida should count. Even if some delegates are reinstated, Clinton will remain behind Obama — which is the math that counts.