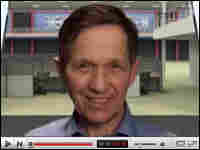 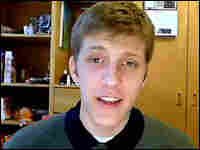 College student James Kotecki had some advice for Democratic presidential candidate Dennis Kucinich. When you're on YouTube, closeness counts. Don't be afraid to let the camera get in your face, the Georgetown senior and online-campaign-video critic said in an online video of his own.

The Ohio congressman agreed and responded with another video, featuring, you guessed it, a close-up angle of Kucinich.

Kotecki tracks many of the political ads on YouTube, and he posts his critiques on the Web site.

And with unofficial ads popping up, like the 1984-style ad mocking Hillary Clinton (which it turns out was produced by a Barack Obama supporter without Obama's approval), candidates have lost some control over their message, Kotecki tells Renee Montagne.

"It is true that in the age of user-generated content, candidates are going to have a lot less control over what goes up," he says. "I think that's worse for candidates who fear loss of control and aren't good at projecting nonchalant off-the-cuff versions of themselves and really require a very controlled image to be effective."

For example, before he made his presidential run official, Barack Obama went on "Monday Night Football" and, after a pregnant pause, announced his decision to support the Chicago Bears.

It worked as a video on YouTube, Kotecki says, because it was short and funny — perfect for viral forwarding on the Internet.

Candidates shouldn't just treat sites like YouTube as a "one-way medium for broadcasting a message," he says. Instead, they should treat is as "a two-way conversation, where you can respond to people that are making videos that address you and they can then respond back to you and have this almost one-on-one dialogue, but in a public forum," Kotecki says.

Kotecki says that Kucinich made such effective use of YouTube by responding to a video by Kotecki in which he suggested that the Ohio Democrat get more intimate with viewers.

Kotecki, 21, says he hopes the success of YouTube will get more people in his age group interested in politics.

"A lot of people in my generation are very turned off by the glossy campaign ads, sound bites on television news shows, and politicians basically acting like politicians and not like real human beings," he says. "It seems like there's a very big disconnect there. What YouTube potentially can do is bridge that gap."

But he's not sure whether this will translate into more people going out to vote.