Accessibility links
Paris Hilton of Palm Beach Has a Problem The case of Stefanie Woods, the Florida teen just convicted of stealing money from a Girl Scout, has captivated her Palm Beach community. A Palm Beach Post reporter discusses just what's so captivating.

Listen
Paris Hilton of Palm Beach Has a Problem

The case of Stefanie Woods, the Florida teen just convicted of stealing money from a Girl Scout, has captivated her Palm Beach community. A Palm Beach Post reporter discusses just what's so captivating. 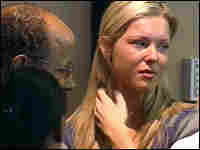 A Palm Beach criminal case, actually, a series of criminal cases, that's the talk of South Florida. It all started when Stefanie Woods, then a 17 year old, stole 150 dollars or so from a Girl Scout. Woods actually drove the getaway car as her friend walked up to a green-clad tyke peddling Thin Mints and ripped off an envelope full of cash. Upon returning to the scene of the crime, Woods had this to say to a local TV station.

PESCA: Then she added this.

Ms. WOODS: We went through all that effort to get it, we got all these charges, and we had to give the money back. I'm kind of pissed.

When Woods stole the scout's money, she was already on probation for beating her boyfriend, and then a few weeks later, she pulled a dine-and-dash at a Denny's. All right, we admit, none of this is earth-shattering, but it is an interesting look at a one-woman crime wave and the media that loves her.

Larry Keller is covering the story for the Palm Beach Post, and we spoke to him yesterday after a juvenile court judge sentenced Stefanie Woods to three years in a high-security facility in order to address the substance-abuse problems that may have underlied her behavior. I asked Larry to describe Stefanie Woods' action in the courtroom and compare them to her earlier antics, and here was his answer.

Mr. LARRY KELLER (Reporter, Palm Beach Post): There were two instances that stand out. One which I did not witness was the day after the cookie-money incident, she and her accomplice, if you will, returned to the scene of the crime, a shopping center, a grocery store, and they saw the TV media out there kind of doing a day-after filming the, you know, where this theft took place, and they sort of pranced around and boasted and laughed about what they had done a day earlier. That's one of the instances.

The other instance that comes to mind is when she was convicted by this judge roughly three weeks ago in the cookie incident. After the judge left the bench, she sort of cursed under her breath. And then she made an obscene gesture to a TV cameraman in the back of the courtroom. And then as she was exiting the courtroom, she gave his camera a good hard shove. And she had to be quieted down by her attorney. She's had two or three court appearances since then, and she's been well-coached, I think, by him. I mean, she's been actually kind of pleasant.

MIKE PESCA: After that incident when she shoved the camera, I mean, did the other reporters kind of talk to each other and say, you know, what kind of advice is she getting? What are her parents telling her? You had to wonder what was guiding her actions, because it seems like she was doing these media availabilities at the drop of the hat and digging herself a deeper hole every time.

Mr. KELLER: Well, I'd rather not speculate on what her motivation was. She has said, and her mother has said, in court that when she feels cornered, or trapped, she lashes out. And that's the way she says she felt that day, and also the day that she was cavorting around for the TV cameras, the day after that incident. She said she knew she was in trouble, and that's the way she reacts, and she herself has said she has anger-control issues.

PESCA: Can you give me what kind of play the story has been getting down there in Florida?

Mr. KELLER: Well, it's gotten quite a bit of play, and it's gotten a very large number of hits on our website. It certainly has been a more interesting case than I ever thought it would be, especially today.

PESCA: And what happened today?

Mr. KELLER: Well, today, she was sentenced in the Girl Scout Cookie money theft case. She'd been convicted earlier this month. It was a non-jury trial. Today was the sentencing, and there were a lot of revelations about her troubles, experimenting with just a really large number of drugs, by her own admission, since age 14, and alcohol. Kind of a pretty troubled background apparently.

Mr. KELLER: Absolutely, it really did. The judge asked her mother some questions. You know, why weren't you - and he was very kind, and he said, I'm not trying to put you on the defensive, but I need to ask this. Why did you not detect this drug use by your daughter? Or if you did, why didn't you do something to stop it?

And you know, her mother was in tears, and you know, I think truly distraught. And Stefanie herself, after the judge pronounced sentence, which was that she's going to be in custody for as long as, but not necessarily, three years, and he ordered her taken away immediately, I don't think it sank in at first. And after her mother hugged her, you could see the realization set in, and she started crying, too. It was, oh, my gosh, I'm not going home soon.

PESCA: And have you have any conversations or interviews with her family members that yielded any insight?

Mr. KELLER: Not a lot. I mean, I've talked to her mother a little bit. But you know, not a whole lot of insight. I mean, I can just tell you what her mother has said in court, which is that she and Stefanie's father - the mother has remarried, but she and Stefanie's father divorced, I believe it was 1999. And she said for the last couple of years, he has not been part of her life. And the mother said that Stefanie had trouble coping with the divorce. So that's about as much insight.

As far as all the drugs that her daughter has admitted experimenting with, the judge asked the mother today, how could you not know about that? And she said, well, she never did them in our home. She never, coming home, staggered into the house. She never looked stoned. And he asked the same question of Stefanie, and she said she often, if she was high on something, stayed at friends' houses that night.

PESCA: All right, Larry Keller of the Palm Beach Post. Thanks for the good reporting, Larry.

Mr. KELLER: All right, you're welcome.