Accessibility links
When 'Strangers' Come Calling, It's Hard Knocks Masked strangers terrorize a couple at a remote mountain cabin. Suspenseful? Intriguing? Only the latter — and only as you wonder what possessed Liv Tyler to take a role in this sadistic, unmotivated mess. 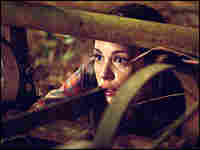 Put yourself in James' shoes: You've gone to an isolated cabin with your girlfriend (Liv Tyler) right after she's turned down your wedding proposal, presumably so that the two of you can spend the evening in tears together.

You hear a knock at the door at 4 a.m., and the knocker gives both of you the willies — so much so that your girlfriend wants a cigarette, so you drive off to buy some, leaving her there alone. (Are James' shoes feeling uncomfortable yet?)

The knocker comes back and starts really freaking your girlfriend out — in a mask, yet — so she calls you. You dash back, but decide she's being silly, and you're going to stay there for the night rather than just driving away. (Shoes really pinching now, right?) At which point bad things happen. And still you stay. And worse things happen. And the two of you are drawn closer together by all this.

OK, kick off those shoes: Does any of this sound remotely plausible? Suspenseful? Intriguing? Well, in the event it's only the last of those things — and only insofar as it raises questions about what possessed Liv Tyler to take a role in this sadistic, unmotivated home-invasion flick.