Accessibility links
Building a Baby Earth to Test Its Magnetic Field It's still mysterious how Earth's liquid center produces its magnetic field. But one scientist hopes to find clues by building a 26-ton spinning model of the planet.

Listen
Building a Baby Earth to Test Its Magnetic Field 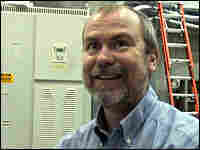 The compass has been around since at least the 12th century, but scientists still don't know exactly how the Earth generates the magnetic field that keeps a compass needle pointing north.

But geophysicist Dan Lathrop is trying to find out — by building his own planet.

His latest effort at the University of Maryland towers over him, a massive stainless steel sphere that looks like a prop from some old science fiction movie. Later this year he plans to fill it with molten metal and set the whole 26-ton ball spinning. At top speed the equator will whirl by at 80 miles an hour.

"It was a little scary the first time we spun it up," he says.

If all goes well, the planet will generate its own magnetic field.

Big Aspirations ... and Getting Bigger

Lathrop figures it can't be too hard to get a magnetic field — after all, most planets in our solar system have one.

But while nature has an easy time making magnetic fields, scientists do not. This is Lathrop's third attempt.

"Planets have an advantage because of their size," he says, "and they're much more rapidly rotating." That's why his quest has taken on gargantuan proportions.

Lathrop's first "planet" was the size of a desktop globe. The second one you could wrap your arms around. The newest one had to be ordered from a company in Ohio that makes heavy-duty items for industry, and the sphere barely fit through the door of the lab when it arrived.

Scientists believe the Earth's field comes from molten metal churning deep inside its core. If you could dig a deep hole, about 2,000 miles down, you would hit the outer core, which is probably made of liquid iron. That iron can conduct electricity. And if it flows in the right way, it can turn the Earth into what scientists call a dynamo, generating a self-sustaining magnetic field — in Earth's case, producing one pole up in Canada and another down in Antarctica.

Iron only melts at high temperatures, though, so Lathrop's team will fill his sphere with a different metal — sodium. Sodium becomes liquid at stovetop temperatures and conducts electricity well, but it's flammable. A sodium fire can't just be put out with water. Water can actually make things worse — Lathrop's team has disabled the sprinkler system.

If all this seems like a potentially hazardous way to answer an apparently simple question, Lathrop says his team doesn't have a lot of choice. It's simply impossible to drill down into the Earth and see what's going on there.

It's unlikely the iron in the core is flowing in a nice little circle. Lathrop expects a kind of organized turbulence, small eddies and whirls with some overarching larger-scale order and patterns.

"The Earth's magnetic field is anything but simple," he says, pointing out that the field has flipped directions many times over the ages. Seen over long stretches of time it's a writhing, spitting thing. The north pole currently wanders around in Canada, and the field's strength is waning, he says, as if it were readying for a flip.

"Every time we go to measure it, it's different than it was before," lathrop says.

Computer models can't capture all the complexity of the flow. The whole system likely feeds back on itself — the flowing metal creates a magnetic field, but that field can then exert forces on the iron, changing its flow. This, in turn, can change the field, which will change the flow.

Other planet scientists have built physical models that create magnetic fields, but with the help of pipes or other devices to steer the flow. Lathrop wants to let the metal slosh around freely as it does in the Earth.

After some safety checks, the metal planet is ready for a test drive, without the sodium metal.

"Shall we spin?" Lathrop shouts across the lab. One of his colleagues throws a switch and the sphere begins to rotate, slowly at first like a subway car gathering momentum. Then it's whirling, quietly and stately, its ribbed features sliding by again and again in merry-go-round fashion.

Lathrop says this model matches the Earth in some important ways, so he's hopeful it will create a field. If it doesn't?

"Well," he says, "then it will teach us something about when planets do and don't make a magnetic field."

He's not sure he would make a another larger one, though, if this doesn't work. "I'm a patient man," he says, "but not infinitely patient."

Lathrop's team hopes to get the planet up and running for real later this year.

Practice Run: Researchers hope this 10-foot tall stainless steel model planet will produce a magnetic field like the Earth's when they set it spinning later this year.