Who's Who on the Rules and Bylaws Committee

Who's Who on the Rules and Bylaws Committee 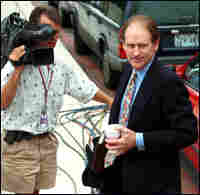 Chills at the DNC: NPR's Political Editor Ken Rudin says there will be drama at Saturday's meeting of the Democratic Party's rules committee. 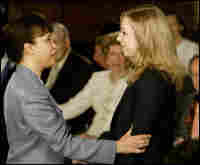 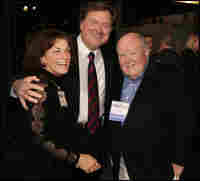 Alice Germond is a committee member. Here, she appears at a gala at the Newseum in Washington, D.C., on Nov. 14, 2007. hide caption 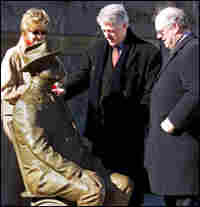 Former President Bill Clinton visits a memorial to Franklin Delano Roosevelt with James Roosevelt Jr., who is FDR's grandson and a co-chair of the Rules and Bylaws Committee. Stephen Jaffe/AFP/Getty Images hide caption

The members of a once-obscure Democratic Party commission have suddenly gained rock-star status.

The 30 people on the party's Rules and Bylaws Committee are meeting this Saturday in Washington, D.C., to decide the fate of the disputed delegates from Florida and Michigan.

Member Gary Shay of California says he receives 500 e-mails a day, most of them urging him to vote in favor of seating the delegates. Sarah Swisher, a former nurse from Iowa, says she marvels when she hears her name on CNN.

Husband-and-wife committee members Don and Carol Fowler get the kind of coverage once reserved for Brad and Jen because they are on different sides of the great Democratic Party divide: He is for New York Sen. Hillary Clinton and she is with Illinois Sen. Barack Obama. And one committee member, Mark Brewer of Michigan, sits on the committee but at the same time has been challenging the group to seat his state's delegates.

"I'm not an old-time rules person," says South Florida lawyer Allan Katz, who joined the committee about a year-and-a-half ago. "I didn't realize that I was consigning myself to Dante's seventh circle of hell."

This weekend's meeting will decide the fate of 367 delegates — 211 from Florida and 156 from Michigan — which the committee stripped to punish the states for moving up their primaries. Clinton's campaign has been pushing for months to have the delegates count; her name was on the ballot in both states, and she won both. Obama's name only appeared on the Florida ballot.

Delegate math aside, including Clinton's votes in Michigan and Florida would boost her ahead of Obama in terms of the overall popular vote. (This is also a disputed number because four caucus states did not tabulate a popular vote, but that's another story.)

More recently, Clinton has argued that discounting the delegates would disenfranchise the states' voters.

The Obama campaign says it is willing to meet the states halfway and has indicated that it would support seating the delegations at 50 percent strength.

Apart from the Clinton camp's pressure to seat the states' full delegations, the committee also needs to balance its own authority against the rights of Florida and Michigan voters.

The committee does not want to dissuade voters from supporting the Democratic nominee in the fall, but it also does not want to let Florida and Michigan off the hook for shifting their primaries. The states' efforts kept the primary calendar in flux until late 2007 and contributed to the early start of the primary season, which began on Jan. 3 in Iowa.

"What's at stake is preserving the integrity of the process," Shay says. "There were rules that were violated, and a remedy needs to be found within the rules that are acceptable."

Members of the rules committee and DNC staff say they are leaning toward restoring half of the states' delegates — an approach the Obama campaign supports. A DNC staff memo about the conference says party rules stipulate that the states' delegates must be reduced by 50 percent, but Clinton advisers argue that the 50 percent penalty can be overridden by the committee and the full delegation seated.

The Rules and Bylaws Committee is led by longtime Democratic insiders Alexis Herman and James Roosevelt Jr., who is a grandson of Franklin Delano Roosevelt. Both served in former President Bill Clinton's administration: Herman as secretary of Labor and Roosevelt as the associate commissioner of Social Security.

Roosevelt has served as the co-chair of the rules committee since 1995. Colleagues describe Roosevelt, a lawyer by training and now the president and CEO of the Boston-based Tufts Health Plan, as detail-oriented. Fellow DNC member Marty Xifaras has known him since 1980. Although she calls the impending delegate negotiations "charged," she says Roosevelt's institutional knowledge of the committee will lend the meeting greater credibility.

Herman has served as the co-chair of the Rules and Bylaws Committee since 2005, and she has held high-level positions in the Democratic Party –- as the DNC chief of staff for Chairman Ron Brown and as the CEO of the 1992 Democratic National Convention.

Neither Roosevelt nor Herman has publicly endorsed a candidate.

The committee has several Democratic heavyweights such as Harold Ickes, one of Hillary Clinton's top advisers; Donna Brazile, the campaign manager for Al Gore in 2000; and Alice Germond, the DNC secretary. The rest is made up of lawyers and state party members otherwise unlikely to appear on network TV.

In advance of the meeting, the members have received a 38-page memo that outlines a DNC analysis of the Florida and Michigan situation and copies of the challenges from both states.

Shay, the committee member from California, anticipates that either the co-chairs or the DNC lawyers will outline the process for all those present, as well as the TV cameras. "Not only does the committee need to be fully informed, but so do the people watching this. There are a lot of misconceptions about who we are and what our role is," he says.

After the committee hears the testimony, it will vote on a series of motions prepared by DNC lawyers or members of the committee. Then, the committee will vote through either a show of hands or a roll call. The committee members have been advised not to make any travel plans until late Sunday, should they need to meet a second day.