Accessibility links
Ancient Hair Reveals Greenland Eskimos' Roots A 3,000-year-old clump of human hair found frozen in Greenland may have solved a scientific mystery: Where did ancient Eskimos come from, and where did they all go? 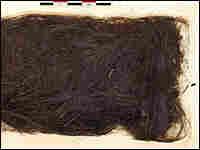 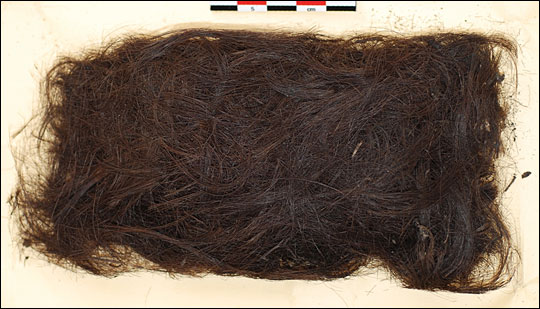 A 3,000-year-old clump of human hair found frozen in Greenland may have solved a scientific mystery: Where did all the ancient Eskimos come from?

The ancient clump of hair looks like something you'd sweep off a barbershop floor. "It's kind of brown, got a bit of dirt in it, a bit of twigs, but ... it looks [in] remarkably good condition," says biologist Thomas Gilbert of the University of Copenhagen.

University of Copenhagen researchers had spent months in Greenland trying to find human remains, with no success. They then learned of this hair sample, which was discovered in the 1980s in Disko Bay, in western Greenland, and was being kept in a museum collection.

And the hair yielded something extremely rare — the DNA of some of the earliest humans to live in the Arctic. By studying that DNA, researchers say they've been able to answer a longstanding question: Are modern Eskimos descended from ancient Native Americans, or did they come from somewhere else?

The answer, according to a new study published in the current issue of the journal Science, is somewhere else — probably eastern Asia.

Gilbert says researchers have found almost no ancient human remains in Greenland and the northern reaches of North America. Other artifacts dating back thousands of years have been discovered — but the hair is the first to contain usable DNA.

Past discoveries of hunting and fishing tools at archaeological sites proved that ancient Eskimos lived in Greenland, Gilbert says. But the sites didn't contain much biological evidence — like teeth, bones or hair — that could provide DNA samples.

Where in the World?

Now, with DNA from the hair, Gilbert's team has been able to compare ancient DNA with existing populations around the Arctic. The closest matches, he says, "came from the Bering Sea region." Some current residents of the southern Aleutian Islands and the Chutchi Peninsula of Siberia carry similar DNA, he says.

However, Gilbert says, this doesn't prove that the ancient Eskimos migrated from the Bering Sea area. But it is evidence of a pretty specific geographical link.

Since they aren't ancestors of Greenland's current Eskimos, Gilbert speculates, these ancient people may have later migrated from the Arctic due to climate changes that made survival difficult.

As a researcher, Gilbert admits to having a bit of a hair fascination — he has studied the locks of mammoths, woolly rhinos and mummies — but those, he says, are "actually quite common" compared to this clump of human hair.

And it's the most interesting hair he's worked with, he says.

"Because these human remains from this period are so rare," he says, "we were really stuck not being able to do any genetic work until this one came along. It really opened up a horizon for us."