Accessibility links
Portuguese Fado and a Few Dirty Tables The Portuguese folk music called fado is enjoying a surge in popularity, thanks to international stars like Mariza. But in the narrow alleys of Lisbon's Alfama district, locals like their fado stripped down to its soulful essentials. 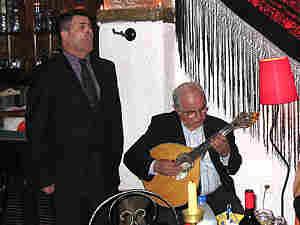 In recent years, the melancholic Portuguese folk music known as fado has gotten a lot of play around the world. Many of the singers have stylized their songs to suit the tastes of an international audience. But in Lisbon, traditional performers still sing in cramped bars, accompanied by a guitarist or two.

It's a weekday night, and Sao Miguel de Alfama is hopping.

There are about half a dozen tables under the low brick arches. The club is on the ground floor of a 10th-century Moorish building in the Alfama, the old waterfront district where the fado was born. No one is sure how it started, but some believe the fado began when Portuguese sailors sang about their yearning for home using African slave melodies.

While one of the bar's singers performs inside, the others stand out on the cobblestone alley, smoking and exchanging jokes.

One muses that they'll never be as successful as stars like Mariza, Camane and others who've made fado popular overseas. These singers say they earn about $40 a night. At the Sao Miguel, they help wait — and even bus — the tables when it gets busy.

Jose Matoso is the maitre d', the emcee and one of the fadistas. He used to drive a taxi during the day and sing at night. A few years ago, his wife convinced him to dedicate himself full-time to the clubs in the Alfama and in Lisbon's other barrios.

"There's a lobby that helps some people, like Mariza, Camane and others," Matoso says. "They consider traditional fadistas like us to be poorly educated and not refined enough to be presentable in other places."

Much of the global success of fado has been thanks to the introduction of other instruments, such as the piano, and mixing it with other styles. Matoso says that most of what people hear abroad is not the real thing.

"The real fado is not rehearsed," he says. "It's spontaneous, none of this business of, 'Let's practice in the afternoon for a performance in the evening.'"

There is a purity to the fado sung at Sao Miguel de Alfama. The performers wear dark, elegant suits or dresses. When they sing, they stand perfectly still, with their chins held high and their hands in their pockets or by their sides.

Lisbon has fancier fado restaurants than this one, with lines of tourists waiting to get in. But the crowd at the Sao Miguel is overwhelmingly Portuguese, especially around midnight, when a customer gets up and begins to sing.

Over by the cash register stands a woman who looks like she's the boss. Her name is Fatima More.

"I'm the owner of this restaurant Sao Miguel de Alfama," she says, "and I do this work with big pleasure because I like very much my country, my traditions and, of course, the fado." More shares the singers' disdain for the internationally marketed fado.

But the soul is very much in evidence here, as the sound of fado fills this small tavern into the early hours of a Lisbon morning.