Accessibility links
Mr. Spock: The 'Mystery of Masculinity' Embodied When Gene Roddenberry was putting Star Trek together, NBC execs had some advice: "Lose the Martian." We all know how that turned out: Mr. Spock (a Vulcan) ranks among the most fascinating characters in TV history. 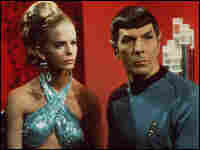 A central theme in Mr. Spock's role on Star Trek was his struggle to balance the intellectual and the visceral. Getty Images hide caption

Comments from The 'In Character' Blog. Join the conversation.

He was just plain sexy, without even trying. Sex symbol, savant and occasional psychic: Spock is an icon for all times.

"What was truly astonishing was my Depression-era mother moaning...,'Why don't you be more like Spock?' She admired his cool handling of any crisis and his logical thought processes."

"...Is he truly an ideal to strive for? Do we really wish to calculate probabilities for all our decisions and then calmly experience the wonder and mystery of the world around us, suppressing all joy, anger and sadness?"

"He encompasses elegance and intelligence, and a way of observing life that, while pointed, was never cruel."

'Waves and Waves of Pain'

'In Control of My Emotions'

When Gene Roddenberry created the TV series Star Trek, the suits at NBC had some advice: "Lose the Martian."

They were talking about Spock.

Fascinating — four syllables and one arched eyebrow — that's Spock, just as much as his pointy Vulcan ears.

The first time actor Leonard Nimoy said the word was in an episode where the crew of the USS Enterprise faced a strange, sinister entity. No matter where the ship turned, the object managed to be in their way. The bridge was on high alert — so Nimoy shouted out his next line with the same energy: "Fascinating!"

"The director, God bless him, said be different from everyone else," Nimoy remembers. So on the next take: "Fascinating," in that cool, collected way.

"I think in that moment a very important aspect of the character was born," Nimoy says.

D.C. Fontana was a writer for the original Star Trek series, which ran from 1966 to 1969. She says that singular "fascinating" conveyed interest, skepticism and — layered deeply in there — a kind of wonder.

Nimoy found fascination in Spock's status as an outsider.

"When [Gene Roddenberry] hired me to do the role," Nimoy says, "he gave me a very interesting dynamic to work with, in that Spock's mother was human, his father was Vulcan. He was sort of a half-breed."

And as such, he was prone to some internal conflict.

As Spock's mother Amanda explained in one episode: "When you were 5 years old and came home stiff-lipped, anguished ... I watched you knowing that, inside, the human part of you was crying."

"I think that's one of the most interesting things about Spock," says Nimoy. "It's not what you're getting, but what you don't get — what peeks out occasionally."

What peeks out occasionally are Spock's emotions. One of the series' favorite gambits was to have him lose his mind. Writers would put him under the influence of an urge to mate, or a flower spore, or a germ that eliminates defense mechanisms, as in an episode called "Naked Time."

Emotion vs. Intellect: 'It's A Struggle We All Face'

"It's a struggle we all face," says Henry Jenkins, humanities professor at the Massachusetts Institute of Technology. "Are we driven by our emotion or by our intellect? And how do we reconcile those two things?"

One of the things Jenkins studies is Star Trek fan culture. He says Spock's struggle makes him an unlikely sex symbol.

"Spock is sexy for a large number of people, male and female," Jenkins says. "Many of the female fans I studied really are attracted to the emotional depths of this character." Like many men, Spock "represses outward signs of emotion," Jenkins says. He's a character "who tries to hold it all in, but who seems to be sensitive, sensuous at certain times."

And Spock's intense relationship with Captain Kirk only complicates his character.

"He seems to have a deep affection and even passionate relationship to Captain Kirk," Jenkins says. "This character, then, became the embodiment of the mystery of masculinity."

At a Turbulent Moment, a Bridge Between Cultures

Star Trek made its debut during a turbulent moment in history — in the midst of the Vietnam War and the feminist movement — and Spock somehow spoke to the times, Jenkins says. It was rare then, he says, to see a TV character embody two very different cultures.

"In that sense Star Trek looks ahead to the society we live in today, where so many people are mixed race, mixed cultural background," Jenkins says. "And I've been thinking about that a lot lately, looking at Barack Obama. There's something in the [Obama] mythology that seems to echo our assumption about Spock — that he's someone able to bridge worlds. And he's indebted to Vulcan philosophy of IDIC, the Vulcan philosophy of infinite diversity and infinite combination. Someone who is of mixed race is seen as being capable of understanding both races."

(As it happens, Nimoy supports Obama for president.)

While Jenkins says Nimoy's performance as Spock was a marvel of sensitivity and nuance, he is looking forward to a new actor playing Spock in an upcoming movie. Jenkins is brave enough to make a comparison to Hamlet: Like Shakespeare's conflicted hero, Jenkins says, Spock is a character for the ages.

"We can imagine seeing hundreds of different actors play Hamlet, and indeed the richness of Hamlet is seeing differences and the different interpretations of that character," Jenkins says. "With the new movie, we will for the first time see Spock as a character larger than an actor."