Accessibility links
Teen to Attempt Solo Sail Around the Globe Zac Sunderland will set off on June 14 from Los Angeles for a big adventure: The 16-year-old hopes to set a record as the youngest person to sail alone around the globe. He and his parents speak with host Alex Chadwick.

Listen
Teen to Attempt Solo Sail Around the Globe 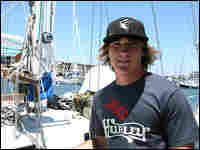 Zac Sunderland, 16, stands next to the sailboat he plans to sail around the world on a solo journey. Alex Chadwick/NPR hide caption 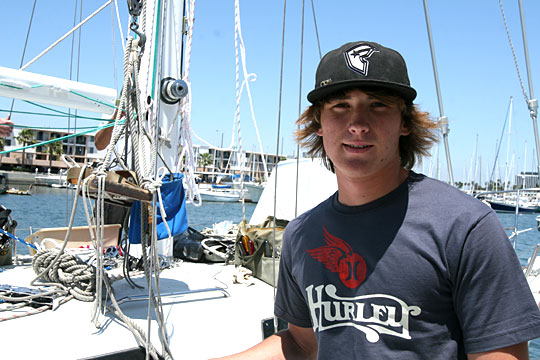 Zac Sunderland, 16, stands next to the sailboat he plans to sail around the world on a solo journey.

California teen Zac Sunderland sets off next month on a big adventure. The 16-year-old hopes to set a record as the youngest person to sail alone around the globe.

Sunderland comes from a sailing family. His father manages yachts. The family, which includes seven children, spent many long months on cruises, and since he was a child, Sunderland has dreamed of sailing around the world, by himself.

He bought his boat, The Intrepid, for $6,500. But with the help of his family and some sponsors, he's spent much, much more rigging it with sophisticated equipment, including a state-of-the-art navigation system and a satellite phone.

Zac intended to set sail out of Marina Del Rey in Los Angeles on Saturday; however, his boat developed engine trouble and the launch has been postponed until June 14. From California, he'll head to the Marshall Islands, some 2,000 miles west of Hawaii. That leg of the trip will take him about a month. From there, he'll keep going, and going. He hopes to return to Marina Del Rey within a year and a half.

Most mothers worry about their teenagers when they go to the mall. But Sunderland's mom, Maryanne Sunderland, says she's confident her son has a good boat, excellent sailing skills and the maturity to stay out of trouble.

"He's a better sailor than he is a driver," she told NPR's Alex Chadwick. "I feel safer with him in a boat than driving in our car."

For his part, Sunderland says he's living out a dream. He'll self-tutor to finish his senior year in high school during the trip, and when he gets back, he says he hopes he can make a career as an adventurer.

"I'll have plenty of time to think about it during my trip," he says. "We'll see how it works out. You never know where life's going to take you."

You can follow Sunderland's sailing adventure at his Web site, Zac Sunderland.com.