Accessibility links
Series Overview: The Urban Frontier — Karachi By the end of this year, half the world's population will live in cities, according to the U.N., and the proportion will only increase. Morning Edition begins an occasional examination of the world's cities with a series of profiles from Karachi, Pakistan's economic powerhouse. 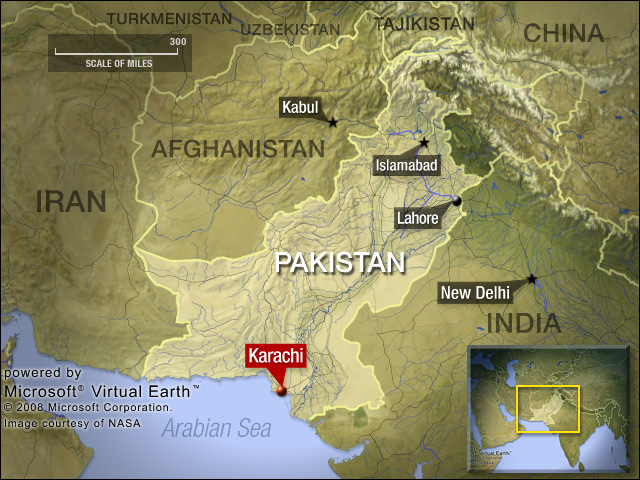 Karachi is Pakistan's largest city, with population estimates ranging from 12 million to 18 million.

Karachi, the economic lifeline of Pakistan, is one of the world's largest and most crowded cities. It's built along a natural harbor facing the Arabian Sea, and this central location between the Middle East and India has made Karachi an important trading port for hundreds of years.

But like any big city, it has its share of problems. Pollution, crime, corruption and political volatility are just some of the issues confronting the 12 million to 18 million "Karachiites" who call this overcrowded city home. Karachi is 60 times larger than it was when Pakistan was created in 1947. And with the population growing at an annual rate of 6 percent, one of the biggest challenges for city officials is managing the tensions and violence that often flare along ethnic and religious lines.

Morning Edition host Steve Inskeep writes about the contradictions of Karachi. As many as half of Karachi's residents live in squatter homes, even as foreign firms pour money into luxury developments.

By the end of this year, half the world's population will live in cities, according to the United Nations, and the proportion will only increase. The way we develop our cities may determine our collective future, living standards, culture, politics, freedom — even our survival.

This is also the year that Morning Edition begins a series called "The Urban Frontier," an occasional examination of the world's cities.

We begin in Karachi, Pakistan. This week, host Steve Inskeep will introduce people who are trying to reinvent one of Pakistan's historic cities. It is a place where so many people live that population estimates run anywhere from 12 million to 18 million — all of them working for their piece of real estate in this seaport city.

We meet the mayor, who's eager to show us every new overpass he's had built in the city.

We meet newcomers, struggling to make it in Karachi's worst illegal housing.

Later on, after we've left Karachi, Morning Edition may report from cities as diverse as Tokyo, New York or Lagos, Nigeria, as well as the "exurbs" that sprawl across America. Our journeys to these and other places could lead to interviews with urban residents and city politicians, with writers and architects — people who will help us understand the urban frontier.