Accessibility links
Democrats Resolve the Delegate Controversy The Democratic Party tried to resolve its longstanding dispute over delegates from Michigan and Florida. On Saturday, the party's Rules and Bylaws Committee agreed to seat all the delegates from the two states, but give them each just half-votes at the August national convention in Denver.

The Democratic Party tried to resolve its longstanding dispute over delegates from Michigan and Florida. On Saturday, the party's Rules and Bylaws Committee agreed to seat all the delegates from the two states, but give them each just half-votes at the August national convention in Denver.

From NPR News, this is WEEKEND EDITION. Liane Hansen is away. I'm Audie Cornish.

The Democratic Party has tried to resolve its longstanding dispute over delegates from Michigan and Florida. Yesterday the party's rules and bylaws committee agreed to seat all the delegates from the two states, but give them each just half votes at the August national convention in Denver.

Unidentified Man: In the best interest in electing a Democrat in America, that we should support this compromise resolution.

Mr. HAROLD ICKEY (Hillary Clinton Adviser): Mrs. Clinton has instructed me to reserve her rights to take this to the credentials committee.

CORNISH: The last voice you heard was from Hillary Clinton adviser Harold Ickey. He's also a member of the rules committee, clearly indicating that the compromise may not have satisfied the Clinton campaign.

NPR political editor Ken Rudin joins us to talk about what happened yesterday and what remains unresolved. Now, Ken, you were in the meeting. Tell us what happened.

Basically what happened, as you know, as everybody seems to know by now, Michigan and Florida were penalized with delegates because they decided to move their primaries up into January, which is in violation of the DNC rules. Hillary Clinton won both primaries handily, but, again, everybody says at the time the primaries would not amount to much.

Now, Hillary Clinton's campaign was insisting that these delegates count, that they do count these results. So, the rules committee decided, well, we will seat these delegates after all, but they will only get a half a vote. If Hillary Clinton was going to win the nomination from Barack Obama, she needed a better ruling from the rules committee and she didn't get it.

CORNISH: So, what is the recourse for Hillary Clinton's campaign?

RUDIN: Well, as you heard Harold Ickey say they could protest to the credentials committee, which is 168 members of the DNC, and they won't meet until July or August at the earliest. And whatever decision they make would have to be decided by the full convention at the floor of the Denver convention in late August.

The last thing the Democratic Party wants is for this to be dragged out into the etch of the convention because they would love to focus their attention on John McCain right now. But the Hillary Clinton campaign is still arguing that they would be a stronger candidate against McCain in November, that they won the most votes if you count Michigan and Florida.

So, we have to see what happens next because there are some primaries coming up - Puerto Rico today, Montana and South Dakota on Tuesday and then the Clinton campaign will reassess what they have to do.

CORNISH: And I don't want to let you go without getting to this news. Last night Barack Obama announced that he was resigning from the Trinity United Church of Christ. That's the Chicago church he joined 20 years ago. This comes after followed-over comments made by his former pastor and more recently a visiting priest.

Now, in the minute we have left, what do you think that is going to mean for this controversy?

RUDIN: Well, Barack Obama knows that whatever happens at Trinity Church he will be asked about it and it will reflect on his campaign. You think that with his apparent, about to wrap up the Democratic nomination this would be a great week for him. But, of course, we saw what happened with the controversy over Jeremiah Wright, which has really hurt his campaign. And now you have these comments by a Roman Catholic adviser, an unpaid adviser, to the Obama campaign.

Michael Pfleger who criticized Hillary's campaign last week, mocked her crying, talked about white entitlement. And Barack Obama realized that even though he's been in the church since 1992, this was too much for him. It was affecting, adversely affecting his campaign and it was time to quit. But, again, he got so much attention, so much negative reaction from this that it was time to quit.

CORNISH: Ken Rudin is NPR's political editor. You can read more about this in his Political Junkie column at NPR.org/PoliticalJunkie.

Committee member and Clinton strategist, Harold Ickes, raises his hand alongside other committee members during a vote on the Michigan delegates on May 31, 2008, in Washington D.C. Mark Wilson/Getty Images hide caption 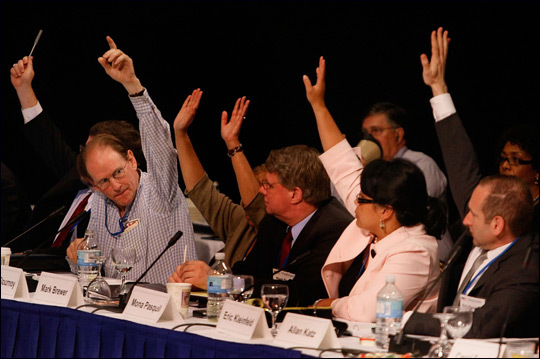 Committee member and Clinton strategist, Harold Ickes, raises his hand alongside other committee members during a vote on the Michigan delegates on May 31, 2008, in Washington D.C. 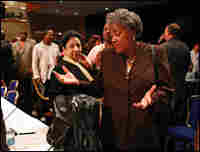 Committee member Donna Brazile told the committee that changing the rules in the middle of the game was "cheating," in reference to the seating of the Florida and Michigan delegates. Mark Wilson/Getty Images hide caption 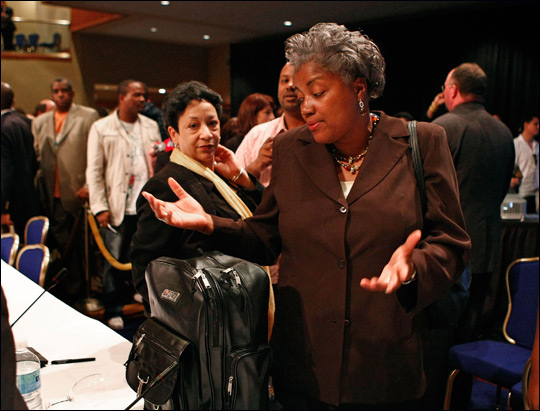 Committee member Donna Brazile told the committee that changing the rules in the middle of the game was "cheating," in reference to the seating of the Florida and Michigan delegates. 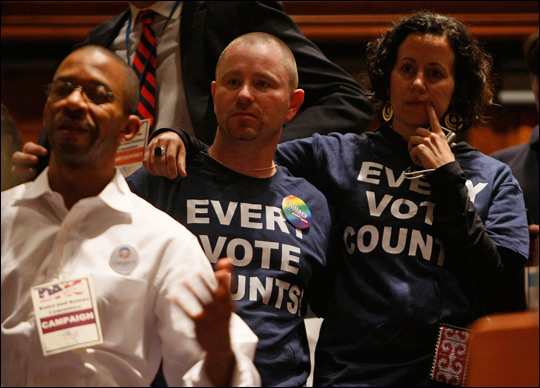 Supporters of New York Sen. Hillary Clinton watch as votes are counted during a DNC meeting at the Marriott Park Wardman hotel May 31, 2008, in Washington D.C.

Supporters of Democratic presidential hopeful Hillary Clinton rally in her support as the Democratic National Committee Rules and Bylaws Committee prepares to meet on May 31, 2008, in Washington, D.C. Joshua Roberts/Getty Images hide caption 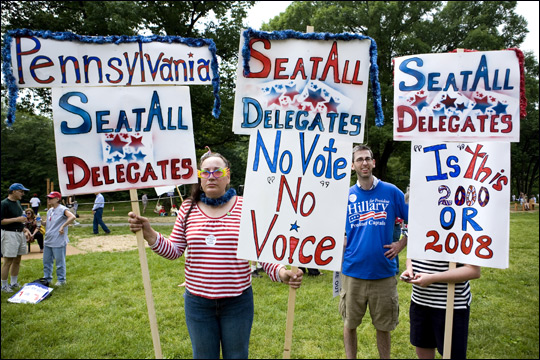 Supporters of Democratic presidential hopeful Hillary Clinton rally in her support as the Democratic National Committee Rules and Bylaws Committee prepares to meet on May 31, 2008, in Washington, D.C.

Saturday brought a dramatic end to a critical day in the 2008 presidential contest.

The Democratic Rules and Bylaws Committee decided to seat all the disputed delegates from Florida and Michigan, but to give each one only half of a vote.

The day began with several hundred demonstrators lining the street outside the hotel where the committee met. The demonstrators primarily were supporters of New York Sen. Hillary Clinton, with only a handful of exceptions, but their message was all about counting votes.

Donna Harrell of Celebration, Fla., traveled to Washington, D.C., with her daughter. "It's sad that this is what we're teaching our young kids — that they have to come out and fight to have their vote counted," she said.

But the presence of the demonstrators and Clinton supporters inside the meeting room was not enough to move the Rules and Bylaws Committee. In a process that remained orderly — despite noisy onlookers and a heavy media presence — the 30-member committee slogged through five hours of speeches and questions before taking a lunch break.

The committee convened to decide the fate of the Florida and Michigan delegates. The two states were stripped of them when they violated the wishes of the national party and moved up the date of their primaries.

Bottom Line on the Committee's Decision

As was widely predicted, the committee did not insist on their original penalty of banning the two states entirely.

But the committee did impose the 50 percent reduction in votes, allowed under long-standing Democratic Party rules. The reason was summed up by Donna Brazile, a member of the committee and a CNN commentator who is not committed to either campaign. Brazile also managed Al Gore's presidential campaign in 2000. She put the emphasis on the importance of rules.

"My mama always taught me to play by the rules and to respect those rules," she said to the audience's applause. "When you decide to change the rules, especially middle of the game and end of the game, that is referred to as cheating."

In Florida, Clinton walked away with a net gain of 19 delegates. The committee also re-apportioned the delegates from Michigan, giving many to Obama in Michigan, despite the fact that his name did not appear on the ballot in that state. There, the Clinton camp only picked up a net gain of five delegates.

The arguments are most likely to continue over the Michigan delegates. The committee agreed that Obama was not on the ballot because he withdrew in deference to this committee's own ruling, as did the other major candidates, apart from Clinton.

"There's been a lot of rhetoric during this meeting about democracy and on and on," he said. "One final word: Ms. Clinton has instructed me to reserve her right to take this to the credentials committee."

It is possible that Clinton will make an appeal this summer to that group. There is also the possibility that the Clinton camp will campaign past the final primaries on June 3.

The next few days should be crucial, if Obama's lead among the superdelegates continues to widen.

The magic number to now clinch the nomination, with the seating of Michigan and Florida, is 2,118 delegates. Obama is just 65 delegates away from that number.