Accessibility links
Autistic and Proud: A Movement Takes Hold Activists in the autistic-rights movement say society should start making room for them to be themselves. Ari Ne'eman, president of the Autistic Self-Advocacy Network, says autism and Asperger's syndrome aren't diseases, but different ways of being.

On the Autism Rights Movement 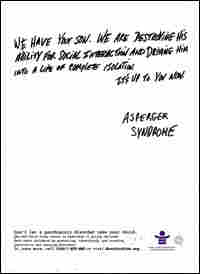 The Child Study Center at New York University canceled this ad campaign after hearing criticism from the public. hide caption 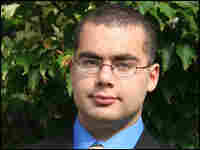 For Ari Ne'eman, the case for moving from Asperger's to activism was never more clear than last year, when the Child Study Center at New York University released a series of ads about "psychiatric disorders."

Designed to look like a ransom note, each ad claimed a condition such as depression, bulimia or autism was holding a child hostage.

"We have your son. We are destroying his ability for social interaction and driving him into a life of complete isolation," read one. It was signed "Asperger Syndrome." After a public outcry, NYU canceled the campaign.

Ne'eman, now 20 and the subject of a recent article in New York magazine, was among those offended by the school's approach to raising public awareness. He's the president of the Autistic Self-Advocacy Network and has been diagnosed with Asperger's. "We found these ads extremely offensive because they reinforced perceptions of people with disabilities as not being full people, as being somehow kidnapped and not fully present in our own bodies."

As its name suggests, the Autistic Self-Advocacy Network aims to help people with the disorder represent themselves, instead of relying on families and care providers to speak for them. They share a credo with other disability groups: "Nothing about us without us."

Ne'em describes Asperger's and autism as disabilities — but with a twist. "We're disabled by society," he says. "What disables us is, for instance, an education system that's only designed to meet the needs of one kind of student, or societal prejudices which say that autistic people will never be able to live in a community."

Autism disorders exist along a spectrum, with great variance from one person to another. Ne'em argues that his condition is part of his identity, the same way gender or ethnic background might be. "We are proud of who we are," he says. "We are proud of the community that we are building."