Accessibility links
The Making of a Feta Fan Though she waves the flag of her Greek heritage proudly, Nicole Spiridakis says, she never liked feta — until she went to Greece last summer and really tasted it. She bit into a slab of the fresh, creamy Greek cheese, sat straight up and paid attention.

Listen
The Making of a Feta Fan

The Making of a Feta Fan 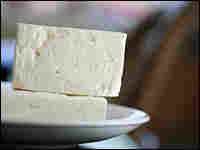 Feta is a brined, aged curd cheese, traditionally made with at least 70 percent sheep's milk. In Greece, it's a feature of many dishes, often paired with olive oil, herbs and sun-ripened tomatoes. Nicole Spiridakis for NPR hide caption 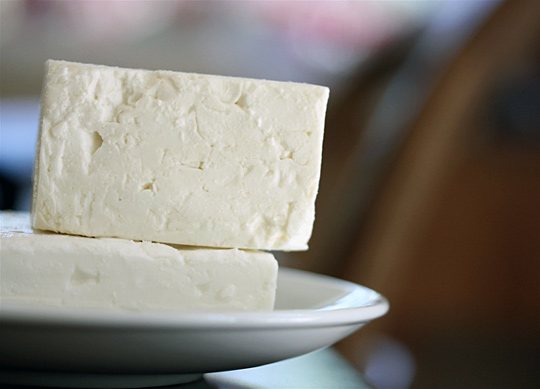 Feta is a brined, aged curd cheese, traditionally made with at least 70 percent sheep's milk. In Greece, it's a feature of many dishes, often paired with olive oil, herbs and sun-ripened tomatoes.

Though I wave the flag of my Greek heritage proudly, I just never could get behind feta cheese. The very thought of it made me wrinkle my nose in disgust. The first time I ate it, when I was in third grade, I spit it out. It was salty and grainy and downright strange. Then, last summer, I visited Greece and really tasted it — and changed my mind about feta.

Perhaps it was because I'd developed a taste for salt, or for the grainy or for the downright strange. Perhaps it was because as a vegetarian, my dinner options were limited and feta was everywhere. Or perhaps I was just hungry. Whatever the reason, the first time I bit into a slab of fresh, creamy Greek feta, I sat straight up and paid attention. Feta? Yes, please.

I ate a lot of other things there, of course — fresh pistachio nuts, flaky honey pastries and tangy yogurts — but it was the taste of the feta that stayed with me long after I returned to the States.

Feta cheese is a brined, aged curd cheese, traditionally made with at least 70 percent sheep's milk. In Greece, the remainder is goat's milk. Other fetas may contain cow's milk. The cheese is salted and cured in a brine solution based on water or whey for several months before it is packaged and sold.

In the European Union, only the Greeks can call this cheese feta. In 2005, the EU's highest court ruled that feta cheese is a traditional Greek product and that non-Greek European feta producers were not allowed to call their product by the same name.

I was in Greece visiting my brother Kurt, who was working as a boat builder on Spetses, a small island in the Saronic Gulf about a three-hour ferry ride from Athens. I had been to Greece before, but on this, my third trip, I slipped under Greece's skin — and it slipped under mine.

The afternoon I arrived, jetlagged and woozy, Kurt took me to a kafenio (cafe) overlooking the island's small harbor. He ordered for us, and that was fine by me. After a 20-hour trip from San Francisco, all I wanted to do was sip a cold glass of retsina (an earthy Greek wine) and look at the ocean.

"We're having feta," he announced, daring me to contradict him. Wisely, I didn't.

The food arrived and I stretched out my legs and took a deep breath. The air was balmy and sweet. I dipped my bread into a warm pool of melted feta and listened to the boats bump against each other in the harbor. The Mediterranean was quiet as a sigh. The cheese slipped down so easily. Had I really not liked this stuff?

I learned that baking feta is one of the easiest and loveliest ways to appreciate its charms. All you need to do is throw an 8-ounce block of feta into a 350-degree oven with a quarter-cup of olive oil, some chopped fresh oregano and three sliced cloves of garlic. Season with salt and pepper and layer with sliced tomatoes (about two tomatoes should do it), and bake until the cheese is melted and bubbling. With good bread and a glass of wine, Greece won't feel too far away.

Greeks also love feta in salads. Usually, if you order horiatiki (Greek salad), it will arrive with a large slice of feta on top. You'll also get your daily dose in savory pastries, such as spanakopita (spinach pie) and tiropita (cheese pie), or melted or fried and served with bread.

Most of my meals in Greece last August involved horiatiki of tomato, cucumber, red onion, olives and a thick slab of feta, or feta crumbled into big chunks. Sometimes tavernas threw in sliced peppers. But feta was always present.

When I realized how foolishly I'd denied myself for so long, I couldn't get enough. One afternoon, Kurt's girlfriend Emily invited me to their small apartment for lunch. I stopped by the island's bakery in the midday heat and used my meager Greek to order a bag of cookies and a loaf of bread. I wound my way through the narrow back streets of the town, brushing past white-washed walls and shy cats.

At their place, I was presented with a feast: pasta with sauteed vegetables, nectarines, honey and yogurt, fresh tomatoes. The real prize, however, was a big piece of feta, slightly warmed on their tiny stove, drizzled with olive oil and sprinkled with a bit of oregano. We drank wine on the back porch and picked at the cheese until it was all gone.

My third night on the island also highlighted feta. We decided not to go out and instead ate a sort of pickup meal of large white beans baked with tomatoes, tzatziki (a garlicky cucumber-yogurt dip), bread and leftover salad of feta, tomatoes and onions. That salad alone — with its tomatoes grown under a blazing Mediterranean sun, marinated in local olive oil and punctuated by salty, creamy feta cheese — was worth the price of the plane ticket.

"Yiamas," my brother said, clinking his glass against mine as we vied for the last pieces of feta. "Cheers. Come back soon." 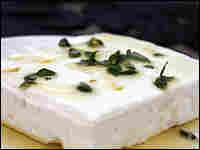 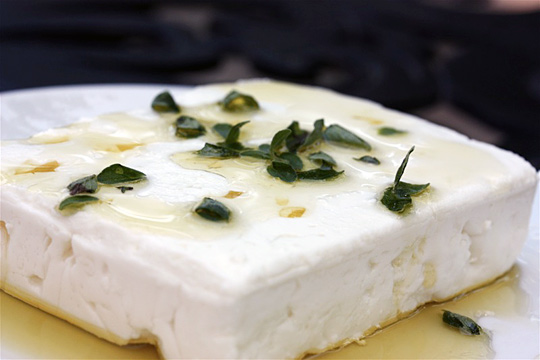 My brother's girlfriend Emily served this warmed feta with local bread the first full day I spent on Spetses. Cooking it briefly in a frying pan mellows the cheese a bit, and it has become my favorite — and quick — way to indulge. Fresh oregano is ideal here, though you may also use dried.

Heat the olive oil over low heat in a large frying pan. Add the feta, and cook for 2 to 3 minutes. The cheese should be warm but not falling apart.

Put the feta on a plate, pour the warm olive oil over it, and scatter the oregano over the top.

Eat with lots of bread or pita to soak up the olive oil. 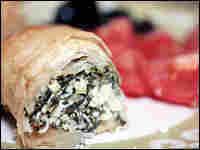 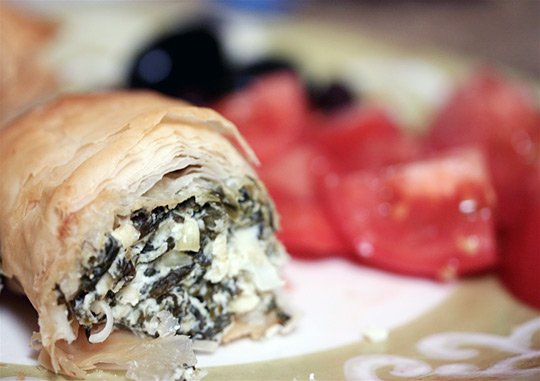 Feta and spinach, layered with flaky filo pastry, is ubiquitous in Greece.

Blanch the spinach in boiling water for 5 minutes, drain and squeeze out the water, and put in a bowl to cool. Add the eggs, green onions, feta, and salt and pepper, and mix well to combine.

Preheat the oven to 375 degrees. Unwrap the filo pastry on a flat surface and cover with a damp towel. Lightly oil a 12-inch-square baking dish. Place one sheet of filo in the dish and brush lightly with the butter or olive oil.

Repeating the process, layer with two more sheets of filo. Add all of the filling and spread it out on the pastry. Top with another sheet of filo and brush with the butter or olive oil. Repeating the process, layer the remaining sheets of filo. Score the top layers of filo with a sharp knife so it can easily be cut into squares about 2 inches by 1 inch.

Bake for 40 to 45 minutes, or until golden brown. Remove from oven and let sit for about 5 minutes. Using a sharp knife, cut the spanakopita. Serve warm or at room temperature.

Place the feta, garlic, oregano and olive oil in an oven-proof dish and season with salt and pepper. Place the tomato slices on top, and bake until the cheese is melted and bubbling, about 20 minutes. Remove from oven and let cool a few minutes before serving with bread. 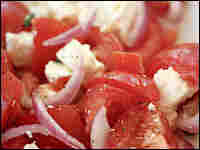 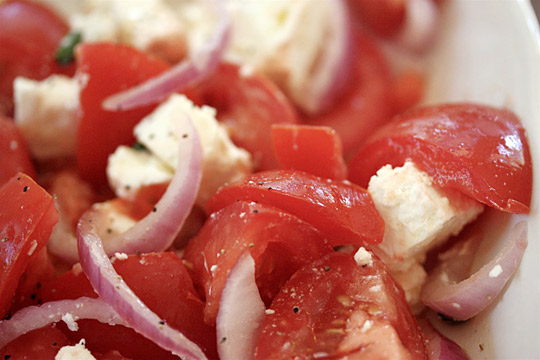 Traditional Greek salad incorporates olives and cucumbers, but I wanted to keep things simple, so I omitted them. This dish is especially delicious using heirloom tomatoes later in the summer. If you have time, let the salad sit a bit at room temperature to let the flavors mingle before eating.

Chop the tomatoes coarsely and retain their juices. Put the tomatoes and juice in a large bowl. Add the onion and olive oil, and salt and pepper to taste. Stir until all is well-coated with the oil.

Place the slab of feta on top or break it into chunks and mix in with the rest of the ingredients. (It's more fun to pull it apart with your fork with your dining companions as it's served.) 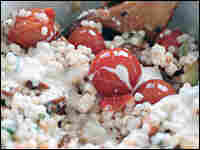 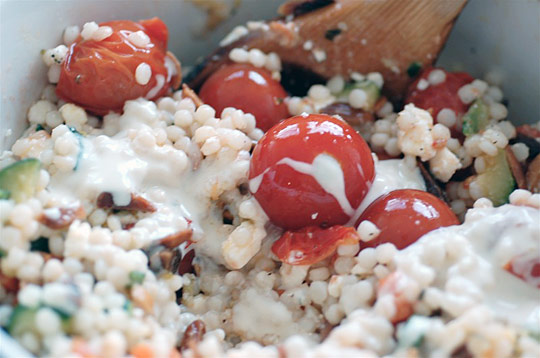 Pearl, or Israeli, couscous is much larger and smoother than traditional couscous and makes a wonderful cool salad on summer's hottest days. Here, roasted tomatoes and garlic are the perfect backdrop to salty chunks of feta cheese.

Halve tomatoes through stem ends and arrange, cut sides up, in single layer in a large shallow (1-inch-deep) baking pan. Add unpeeled garlic to pan and roast in middle of oven until tomatoes are slightly shriveled around edges, about 1 hour. Cool in pan on a rack for 30 minutes.

Peel garlic and puree with oil, water, lemon juice, salt, pepper and 1/2 cup roasted tomatoes in a blender or food processor until dressing is very smooth.

Bring broth to a boil in a 3-quart heavy saucepan, and stir in couscous. Simmer, uncovered, for 6 minutes. Cover pan and remove from heat. Let stand 10 minutes.

Spread couscous in single layer on a baking sheet and cool 15 minutes.

Transfer couscous to a large bowl and stir in remaining ingredients, dressing and the rest of the roasted tomatoes. Add salt and pepper to taste.