Accessibility links
Thao Nguyen Can't Say That on the Radio Just as Thao and her band The Get Down Stay Down were about to go on the air and play their new songs, all four of them began swearing like longshoremen. Turns out they needed get it out of their system before hitting the radio and playing new songs.

Listen
Thao Nguyen Can't Say That on the Radio

Thao Nguyen Can't Say That on the Radio

View More Photos from this Session 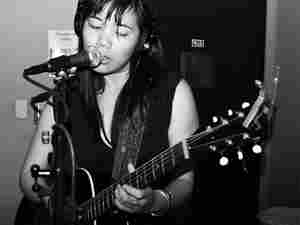 Just as we were about to go live on the air, Thao Nguyen and the three guys in her band The Get Down Stay Down started swearing. They ran through all the words you can't say on the radio, some of which would make a longshoreman blush. It turns out that this was strategic — they were trying to get the words out of their system before the interview started so they wouldn't accidentally curse on live radio.

In fact, they were a wholesome bunch in their own way, as Thao discussed the sources of her inspiration by name-checking her mom, who she says "battled the world" on her behalf.

It may not be clear from the loose sense of playful jauntiness that comes across in the music, but there's a darker side to Thao's songwriting. The process, she says, begins "in the depth of some kind of depression" — which in turn makes the songwriting seem richer for her. She says the songs come more easily when she's feeling low.

After they'd finished playing four songs, I offered to join in on handclaps the next time the band comes into KEXP. Thao agreed, even going so far as to invite me to help out when they record their next album. She's probably just humoring me, but either way, the next time I see Thao and the Get Down Stay Down, the handclaps will come easy.