Accessibility links
From Adam Sandler, a Sloppy 'Mess' of a Comedy Constructed to a slapsticky formula, and cartoonish enough that it's pointless to get too worked up over the stereotyping. More annoying than the crassness: the sloppy direction, which makes for a virtually mirthless first half-hour. 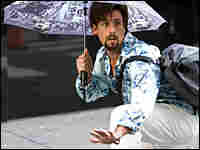 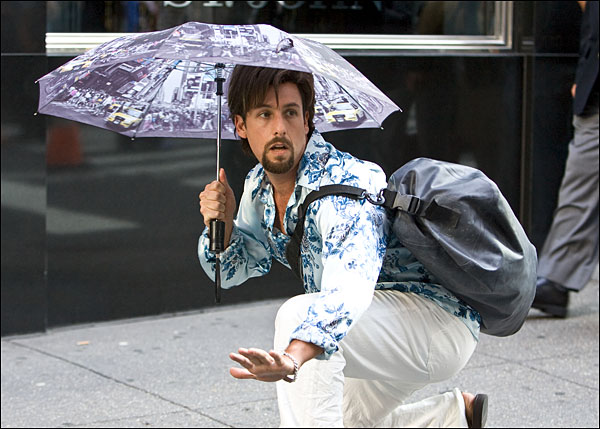 You Don't Mess with the Zohan

Clips from the 'Zohan'

'Danger at the Kiddie Salon'

'You Have Never Cut Hair?'

Among the reliable hazards of summer — sunburn, heatstroke, mosquitoes — we should probably include Adam Sandler comedies. They arrive heralded by posters bearing little more than a title and the star's goofy visage; they take in millions, in inverse proportion to the wit of their scripts, and then retire quickly to video-store shelves.

This year's entry, You Don't Mess with the Zohan, has a hot topic — Israeli-Palestinian tension — to match the hot weather, but it's otherwise constructed to a slapsticky formula. Sandler plays Zohan, a Mossad agent and ladies man (cue the padded-crotch jokes) who's grown tired of assassination-planning and bullet-dodging in the Middle East (cue the hummus jokes) and grown fond of hairdressing (cue the feygeleh jokes).

So he fakes his death and relocates to an Israeli emigre community in New York City (cue the discount-appliance jokes), where he finds a gig as a stylist to randy old ladies (cue the "special back-room services" jokes). And on the way to a can't-we-all-please-just-get-along finale, he falls for a gorgeous babe of Arab descent (Entourage's Emmanuelle Chriqui).

As scripted by Sandler, Robert Smigel and the recently ubiquitous Judd Apatow, everything is sufficiently cartoonish — Zohan can catch speeding bullets (at one point with a nostril) and cook fish with his derriere (don't ask) — that it's probably pointless to get too worked up over the offensive stereotypes the film trades in.

The film is at least an equal-opportunity offender, with homophobic skinheads crashing gay parties, Muslim extremists opening fast-food falafel joints, and Jewish households so garish the wallpaper might make your eyes bleed.

What's more annoying than the crassness, really, is the directorial sloppiness that results in a virtually mirthless first half-hour and a slow build to chuckles thereafter. Sandler, saddled here with an accent that proves annoying before the film is 10 minutes old, can be a decent actor when a project requires it. (Witness Paul Thomas Anderson's Punch Drunk Love.) But Dennis Dugan, the auteur behind last summer's I Now Pronounce You Chuck & Larry, isn't the director to pull nuance out of his star.

And with Sandler also co-writing and co-producing, it's hard to know who else might have said, "Hey folks, this could really be smarter if we tried a little." You don't mess with the Sandler, presumably.