Accessibility links
Why $8 Gas Might Be Good for Us Chris Pummer isn't afraid of the pain at the pump. In a recent column, he argues that $8-a-gallon gas would actually be good for the U.S., improving the country's financial and political future. 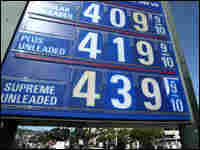 Everyone complains about high gas prices. Politicians offer promises and plans to keep oil prices down. Right now, gas is hovering at around $4 a gallon. But Marketwatch columnist Chris Pummer thinks it might actually be a good thing for most of us if gas prices actually doubled.

Higher gas prices, say $8 a gallon, would be a strong incentive to invent cleaner cars and put an end to the widespread use of the internal combustion engine. "We're technologically advanced enough to know we shouldn't be dependent on oil," he says. "It poisons the air and water."

Pummer doesn't argue that contending with steep price increases will be easy, but he does think the benefits are likely to outweigh the alternative of continuing to rely on gasoline as we do now.

Not only would it reduce reliance on governments in the Middle East and elsewhere, Pummer argues, but decreasing demand would serve to reduce the influence of governments and dictators propped up by oil dollars. "How long would they even stay in power if they were unable to buy off the temporary allegiance of their people with vast oil revenues?" Pummer asked his readers.

If the U.S. develops new energy technologies, Pummer argues, other countries, especially those with growing energy needs like China and India, will follow. "They wouldn't have to make the same mistakes," he adds.

Many economists believe that high gas prices fuel economic downturns, but Pummer observes that so far, recent price rises have not plunged us into recession. Far from creating an economic crisis, he argues, rising prices could be just the stimulus our economy needs to siphon money into investment in alternative energy sources.