Accessibility links
My Personal Leap of Faith As an engineer, Bill Nunan thought the laws of nature govern the universe. But his faith told him God was in control. Now Nunan believes there is a place for both God and science in his spiritual life.

Listen
My Personal Leap of Faith 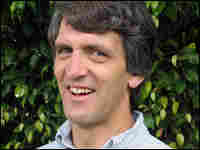 Bill Nunan works as a satellite communications systems engineer. He has electrical engineering degrees from MIT and a doctorate in fusion plasma physics from UCLA. Nunan lives in Manhattan Beach, Calif., with his wife, Eve Ahlers, and three children. Eve Ahlers hide caption

I believe that God does not know the future. I arrived at this belief after a long and difficult journey through — and eventually away from — the faith in which I was raised.

When I was young, many people told me, "God knows everything." For years I tried to force my beliefs to conform to this view. But finally I took my personal leap of faith: I believe that God loves honesty more than conformity. And so I decided to go where the spirit moved me, even if that was away from the spiritual home of my ancestors.

I believe that the fate of our world is not locked in by Scripture, but that the future is shaped by the laws of nature and by what we humans voluntarily do during our time on this planet.

Many people believe every sunrise and sunset, every birth and death, every earthquake, flood and plague is a voluntary act of God. Like most scientists, I believe that involuntary laws of nature explain the behavior of planets, tectonic plates, weather systems and viruses. The earth continually spins and dispassionately quakes. Catastrophes happen infrequently. They are manifestations of the same laws of nature that always govern the universe.

I believe God never tweaks the laws of nature to achieve some desired outcome. Having accepted this, I do not agonize over why God allows evil to occur.

I don't expect God to intervene to help my team win a basketball game, either. As a kid, I thought God knew who would win before the game began. But today I'm convinced nobody knows for sure, not even God.

When I studied science and engineering in college, I met lots of people who had stopped believing in God. They asked, "If science explains the behavior of everything, from electrons to galaxies, then who needs God?"

I decided I still did. I agreed that science eliminates the need for a Creator, but the Creator is only one of the masks of God. The dispassionate mathematical laws of physics seem austere and impersonal, like a star or the moon. But the universe contains more than that. It also includes creatures like us who create purpose and meaning. Gravity does not care, but I do.

I believe my soul inspires me to make decisions to diminish pain and increase love in the lives I touch. Lots of times I try, but fail. On a good day I actually get it right! And God is pleasantly surprised.