Accessibility links
Feds Aim to Dismantle L.A.'s 18th Street Gang The FBI has been trying to take down the 18th Street gang in Los Angeles for more than a decade, but generations of gang leaders have made it difficult. One gang leader even ran his "loyal soldiers" from prison.

Authorities say Francisco "Puppet" Martinez controlled much of the gang violence and drug trade in the neighborhood around L.A.'s MacArthur Park from a federal prison cell in the late 1990s. Martinez ran the Columbia Lil Cycos clique of the 18th Street Gang. From prison, he directed his "loyal soldiers" and his wife to carry out his orders.

Martinez was eventually convicted on the first racketeering charges against gang members in Los Angeles, as well as several other charges. He is now serving three life sentences. 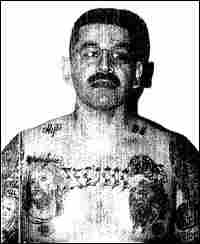 Martinez, pictured around the time of his trial. Courtesy of Bruce Riordan hide caption 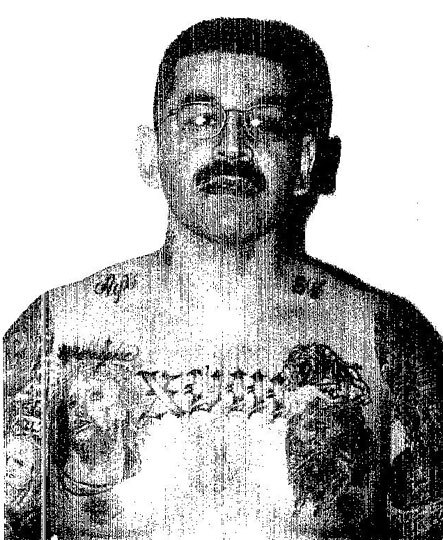 Martinez, pictured around the time of his trial.

Working with L.A. police, the FBI obtained court-ordered taps on the phone of Martinez' wife, Janie Garcia. The tap provided authorities with enough evidence to get a search warrant for Garcia's apartment. Bruce Riordan, who handled the case as a federal prosecutor, says Martinez had a "nest egg" of nearly $450,000 in drug and extortion profits that was hidden in the apartment. Coincidentally, Martinez phoned Garcia's house and spoke with her sister, Olga Hamilton, as the FBI was conducting the search. The FBI also recorded that conversation.

A Letter from Prison

Riordan said Martinez went looking for a "rat," or a gang member who gave information to the police. According to Riordan and the federal wiretaps, Martinez fingered Juan "Termite" Romero, aka "Feo," as the rat and mailed gang members a "hit" letter (see three sections below) in October 1999. The letter, written in Spanish, was intercepted by federal authorities. NPR obtained this copy. Translations are provided below.

"I received your letter and I was very pleased to know that I have a good and loyal nephew who recognized what's good and what's bad, especially when a stupid rat and traitor thinks he's going to do whatever he wants. ... He did the opposite, for his convenience and to take advantage of my love and everything we've been through to keep that car running, so I'm not going to forgive that damned rat and he has to be fumigated so he won't do more s—- and hurt us with his yap."

"Don't chicken out, men and loyal soldiers aren't made or borrowed, we're born that way, true from birth, and it's something that Feo doesn't have. If he betrays me, just imagine what he's going to do to you guys if you let him."

"Be careful and remember that you have me and my good brothers and good soldiers from the neighborhood and that Feo is completely alone."

At the end of the letter, Martinez writes (not pictured): "We do everything with unity, but those like Feo can just go to the cemetery." With much affection, Your Uncle.

On Nov. 1, 1999, Romero and his driver were shot multiple times. They survived, and Romero went on to cooperate with the FBI and U.S. Attorney's Office.

Six days after Romero was shot, Garcia spoke with Martinez by phone and told him the house had to be "fumigated" again. That conversation also was recorded. 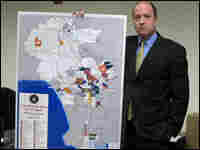 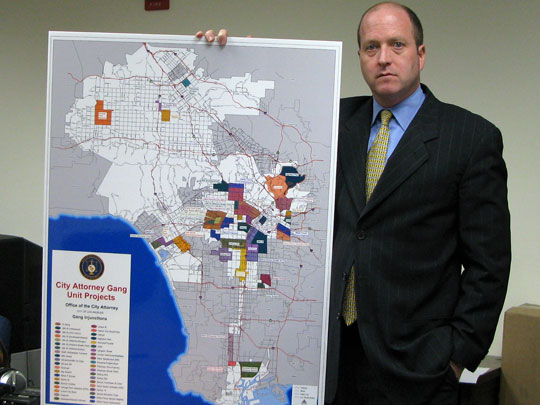 Bruce Riordan was assistant to the U.S. Attorney when Columbia Lil Cycos members were first prosecuted. He holds a map of the gang territory surrounding MacArthur Park in Los Angeles. 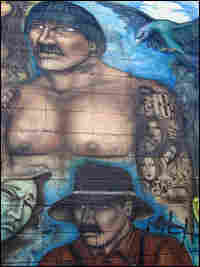 The Columbia Lil Cycos clique is feared and glorified in MacArthur Park. This mural adorns a local donut shop that is said to be a gang member hangout. Mandalit del Barco/NPR hide caption 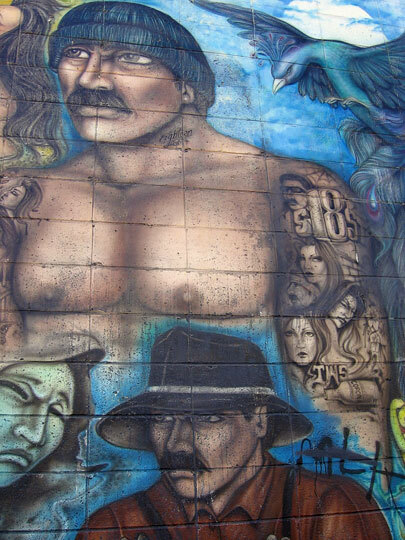 The Columbia Lil Cycos clique is feared and glorified in MacArthur Park. This mural adorns a local donut shop that is said to be a gang member hangout.

Local police and the FBI have teamed up to take down some key players in the violent gang world in Los Angeles.

The final story of NPR's four-part series on gangs looks at how law enforcement has targeted the 18th Street gang, a Latino street gang that is considered the largest in Los Angeles.

The FBI has been trying to take down the 18th Street gang for more than a decade. But generations of gang leaders have made it difficult. The gang has as many as 30,000 members spread across Los Angeles and even as far away as Central America. It is made up of a collection of smaller groups, or cliques.

One of those cliques is the notorious Columbia Lil Cycos.

"They're known for murders, robberies, kidnappings," he says, adding, "They make a lot of money selling dope."

Gomez says the Columbia Lil Cycos also tax illegal vendors. The gang takes a cut from people who sell food, anything counterfeit or anything illegal that goes on in the street.

Gomez's partner, Edgar Hernandez, says dealers and vendors understand the consequence of refusing to pay those taxes to the clique.

"Individuals that didn't want to pay for selling illegally on the streets have got shot, stabbed and even been murdered," Hernandez says.

Last September, one DVD vendor stood up to the gang. He was shot, as was a 23-day-old baby in a stroller nearby. Six Columbia Lil Cycos members will soon stand trial in connection with the baby's death.

A month later, the FBI arrested the leader of that clique — the so-called shot caller — along with his wife and 17 alleged associates and drug dealers on federal charges of distributing crack cocaine. His name is Sergio Pantoja, but he's known on the streets as "Tricky."

Hernandez alleges Pantoja operated a tattoo parlor that was actually a front for an elaborate drug dealing and extortion racket.

Pantoja's tattooed back, chest and arms are filled with Aztec and Mexican symbols, Hernandez says, possibly to show alliance to the Mexican Mafia — a huge Latino prison gang made up of leaders from many street gangs.

Pantoja is the latest alleged shot caller in a tangled hierarchy running from the streets to the prisons.

At the top of that chain is a man they call "Puppet." Francisco Martinez allegedly belongs to the Mexican Mafia. In the late 1990s, he was said to be pulling the strings from federal prison while serving time for immigration violations.

In 2002, the FBI and U.S. Attorney's Office helped convict Martinez on racketeering, murder and other charges. He received three life sentences and is serving time in the nation's highest-security prison.

Bruce Riordan, who handled the Martinez case as a federal prosecutor, says federal informants and wiretaps make it possible to lock up top-tier gang leaders in federal prison. The cases "are no different in scope and significance from the cases that many people are familiar with that have taken down the five families of New York," Riordan says.

Experts say that like the Italian Mafia, the so-called Mexican Mafia operates and runs the streets from federal prisons.

"They enjoy a huge reverence in the prison system; they're like little gods," says retired L.A. Sherriff's Deputy Richard Valdemar.

Valdemar was on the FBI task force to take down the 18th Street gang in the 1990s. He argues that locking up gang leaders has only strengthened the Mexican Mafia, whose members find ways to send out orders to the street gangs from behind bars.

"The system itself tries to isolate them and take away their privileges, but the underground, covert system makes them powerful," Valdemar says. "Some of these guys are brilliant, too. We can't think of gang members as being dumb kids who failed in school and just took up the thug life. No, these guys that reached the top of the prison gang food chain — these guys are brilliant and they could run corporate organizations if they had a mind to do that."

The Next Shot Caller

Gang researcher Alex Alonso, who runs the Web site Streetgangs.com, says that with each takedown by law enforcement, new and sometimes more violent shot callers rise up in the ranks.

"Within a short time, there's gonna be new guys from 18th Street to replace the old guys that were removed — sometimes within minutes or hours," Alonso says.

Even so, federal and local authorities believe they've put a dent in the 18th Street Gang's criminal enterprise, at least for now. They're on the lookout for who might be the next shot caller. And there will be another one, says ex-gang member Alex Sanchez.

"Those are our local heroes," says Sanchez, shaking his head. "It's sad to say those are our role models. How many children are looking out for those role models in those neighborhoods and they want to be like them?"

The lure of the gang culture, he says, may be stronger than any federal-local anti-gang collaboration.