Accessibility links
Remembering Museum Director Anne d'Harnoncourt Former Philadelphia Museum of Art director Anne D'Harnoncourt brought the museum new prominence, spearheading the renovation of 20 galleries and a build-up of its modern-art collection. She died June 1 at the age of 64. 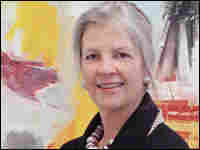 Anne d'Harnoncourt was the director and chief executive officer of the Philadelphia Museum of Art. Graydon Wood, 2005 hide caption

Anne d'Harnoncourt, former director of the Philadelphia Museum of Art, died June 1 at the age of 64. She had returned home after minor surgery, and suffered cardiac arrest. Her sudden death has shocked Philadelphia and the art world.

As director, d'Harnoncourt brought new prominence to the museum, spearheading the renovation of 20 of its galleries and a build-up of its modern art collection. She was the person most responsible for transforming the institution into a great museum.

Philadelphia Inquirer columnist Karen Heller remembered d'Harnoncourt as "an enormous, indelible presence," and wrote warmly of both her patrician bearing and her knack for museum-world diplomacy: "It was possible to spend an hour in her presence discussing major gifts without the director ever mentioning the word money."

One of d'Harnoncourt's specialties was artist Marcel Duchamp; the Philadelphia Museum of Art holds the most complete collection of the work of the French-American artist, who caused a sensation in 1913 when he showed his painting "Nude Descending a Staircase" (now in the Philadelphia collection) at the Armory Show in New York. It was that show that introduced European modern art to America.

Fresh Air remembers her with an excerpt from a 1987 interview — a conversation about Duchamp on the occasion of the artist's centennial.

An earlier version of this story incorrectly stated that Anne d'Harnoncourt was the first woman to lead a major American museum.