Accessibility links
Iran's Women on the Pitch: 'Offside' Iranian director Jafar Panahi's movie Offside is a comedy about young Iranian women trying against long odds to get into a packed soccer stadium. 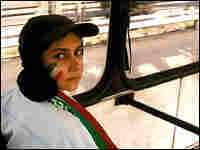 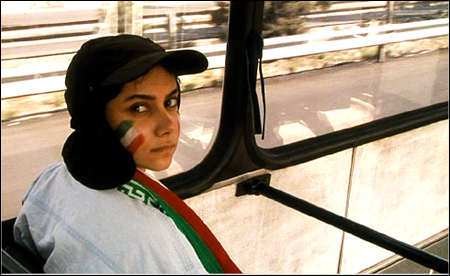 Sima Mobarak Shahi plays a girl whose heart is set on watching Iran play in a World Cup qualifying match.

The island kingdom of Bahrain went up against Iran in a qualifying match for soccer's World Cup in a packed stadium in Tehran last year. And off in a secluded corner — out of sight of the crowd — was a film crew.

The camera was there for an Iranian comedy called Offside, which turned out to be less about the game than about the fans, including some who weren't supposed to be there at all.

Women in Iran are not allowed in soccer stadiums, theoretically for their own protection from such unguarded male behavior as cursing. But there are ways to get in if you're really determined. And on a bus full of rowdy fans, one boyish-looking teenager with cheeks painted red white and green — the colors of Iran's flag — seems to have found one. She's dressed pretty persuasively as a boy.

Alas, at the stadium gates, they're frisking ticket holders. And since being touched by a strange man would be worse than being found in men's clothes, the would-be spectator runs. And gets caught. And is taken to a holding pen high up in the stadium, where half a dozen other girls are being held.

All of them are in men's clothes, and all of them seem to know more about soccer than the soldiers who are keeping them from watching it. They especially know more than the soldier who can see a corner of the field, and whose screamed play-by-play gets almost everything wrong.

Sometimes running afoul of his country's censors, filmmaker Jafar Panahi has made a number of sly, smart movies about life in Iran. In Offside, he seems bemused about his society's determination to protect women's honor whether they want it protected or not.

But he's not mocking anyone, including the men. The film's soldiers seem genuinely to want to treat their female charges with respect, and to wonder whether the rules they're enforcing actually do that.

There's a priceless sequence where one of the detainees needs to use a restroom in a stadium that was built without women's restrooms. Protecting her dignity, while also protecting her supposedly delicate sensibilities from graffiti, proves quite a trick.

Happily, the trip to the restroom gets her tantalizingly close to the soccer field — though neither she, nor the camera, is allowed to look at it.

In a movie that's all about disguises, it's perhaps appropriate that Panahi had to disguise his project to get permission to shoot at the stadium on the day of the big game. He pretended to be making a less socially pointed picture.

If you know that, and also that he was largely working with non-professionals in real-time (the film is just about as long as the game), the effortless humor of Offside is really impressive.

When he was filming, the director didn't even know how the game would turn out. All the more gratifying then, that his movie turned out so well.