Accessibility links
Celtics vs. Lakers: A Matchup for the Ages A great rivalry resumes Thursday when the Boston Celtics meet the Los Angeles Lakers in Game 1 of the NBA championship. It will be the 11th time these teams have played for the title. Commentator Frank Deford says it's nice to see history repeated.

Listen
Celtics vs. Lakers: A Matchup for the Ages 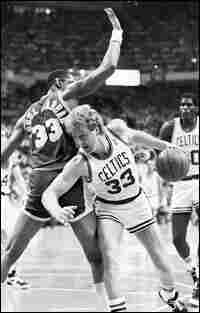 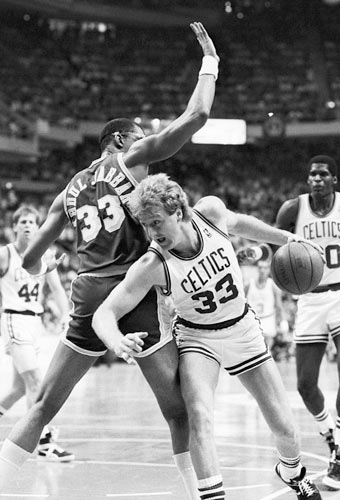 The Boston Celtics' Larry Bird drives around the Los Angeles Lakers' Kareem Abdul-Jabbar during Game 5 of the NBA championship at Boston Garden, June 11, 1987.

It's part of the faith-based history of the NBA — which I wholly subscribe to — that when Larry Bird and Magic Johnson entered the league in the autumn of '79, they took an enterprise that was discredited, dispirited and desperate and restored it to acceptance, even prominence.

The major corollary to that diagnosis is that Magic and Bird could not have worked this transformation but for a benevolent providence that clothed them in the green and white of the Boston Celtics and the purple and gold of the Los Angeles Lakers.

After all, going back to antediluvian NBA times when the Lakers were still domiciled in Minneapolis, at least one of these two franchises has usually been at the headwaters of the league. Together, I'd say, the Lakers and Celtics are the Yankees of pro basketball, and on those occasions — like in the '80s when last they met for the title — when the titans clash, it's even better than the Yankees because the Yankees have never had another Yankees to play off of.

Yes, now, in this year of 2008, when it's, at last again, Boston and L.A. for the basketball championship of the world, attention will be paid — even by those sophisticates who otherwise would not cock an eye toward the NBA. It's proof that those who do remember the past are sometimes very pleased indeed to witness it repeated.

Actually, though, it's worth recalling that the Celtics were originally prophets without honor, within and without. Basketball was so foreign to Celtics precincts that when the franchise settled there, the players had to travel about, putting on clinics, literally to reveal to the natives what this roundball was. Even after Bill Russell made Boston champions year after year after year — an incomprehensible eight in a row at one point, 11 of 13 — the woebegone hockey Bruins invariably outdrew the hoop paragons.

During that Celtics hegemony — when a biblical seven times it was that the Lakers fell in the finals — it was not uncommon for the NBA to not even have a network TV contract. Good grief, I remember one time when Red Auerbach, the hard-boiled Celtics coach, refused to go on TV when a network showed up to cherry-pick the finals.

"Where were you in February?" he growled. "I'm going with my writers."

It was, surely, the last time in recorded history that a human being actually chose to perform for print instead of the camera, but Auerbach suffered that his great minions were so overlooked. Indeed, it was only after Russell retired and the New York Knicks took their throne (beating the Lakers, of course) before an impressionable national media ... only then did the NBA begin to find fashion abroad in the land. This is to tell a family secret that the Celtics have been largely celebrated after the fact.

However, the Lakers, although perennial runners-up, were always glamorous. Hollywood cheered. Doris Day, of all people, was the original Jack Nicholson at courtside. Out there, upon the hardwood, Elgin Baylor and Jerry West were glamour personified. It wasn't until 1972 that the Lakers won their first title in L.A., but their more recent success, as the Celtics wandered in the wilderness for several years, allows them to be rightfully counted as Boston's historical equals.

Sport teams turn over fast. The seasons are fleeting, the players fungible. None of the current Lakers or Celtics really have anything to do with players past. But allow us to reminisce. This is, fairly, one that echoes the ages.