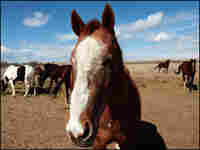 Glover says that all over the country, wherever people keep horses, some people who can't afford to keep them are doing anything they can to cope. "People are just turning them loose or dumping them," Glover says. "[Federal agents] are even finding animals that have been hauled out and shot."

Glover says that much like dogs and cats, horses are members of the family. "This is the animal that raised their kids or grandkids," Glover says. "This is a very emotional situation for some folks."

The problem is that, unlike dogs and cats, horses are incredibly high-cost animals, requiring expensive food, medicine and living quarters — in addition to costs involved with transportation and all the gear necessary for working and riding.

Horse owners who can't afford to take care of their animals face a bleak set of options, and Glover says most of them involve the word disposal.

One option has long been to sell horses for pet or human food. "It was where a lot of these animals used to go," Glover says. "But that's no longer a viable solution."

Glover says there was a time when a horse owner in lean times would just sell the animal for meat. But Glover says most U.S. horse slaughterhouses are shuttered, and recently there's also been a large movement to prevent the exportation of the animals to factories in Mexico and Canada.

An Alternative to the Glue Factory

Glover and his horse rescue outfit, Orphan Acres, provide an alternative, but they can only house so many horses. "We've got 67 right here now," he says. "They come from all different places: court orders, sheriff's offices, humane societies, people who realize they're in trouble and care about their animals. This is a place that they can send them so we can take care of them."

Glover is facing higher costs, too. Last year, he says he paid $80 to $85 for a ton of hay; last month, he says he paid $225 a ton. "With 67 horses, we're feeding over a ton of hay a day," he says. And that total goes up after you include horseshoeing, worming and all the other costs that led to the horse's homelessness in the first place.

What's So Bad About Releasing Horses?

Glover says releasing animals into the wild is simply not an option. A typical family horse has been raised domestically. Divorced from familiar surroundings, Glover says the horse has no idea where to find water, it doesn't know what to eat and it probably thinks all coyotes and wolves are as friendly as the family dog. "Wild mustangs will kill them and stomp them into the ground," Glover says. "The horse has no idea ... he doesn't know how to fend for himself."

Glover says he's actually found horses in the wild that still have halters and other riding gear still attached, as if the owners hoped someone would catch them and ride them to a new home. More likely, Glover says, is that the bridle rope will get wrapped around a tree. "Then it sits there and starves to death."