Accessibility links
RFK Assassination: Aide Recalls Tragedy Repeated On June 5, 1968, Robert F. Kennedy's hotel suite was a "madhouse" of celebration as he and supporters reveled in his California primary victory. But when shots rang out in the hotel kitchen pantry, Ted Sorensen's first thought was, how could this have happened again?

Photojournalist Bill Eppridge says Kennedy's shooting compelled him to take on the role of historian. His goal was simple: to document the moment. 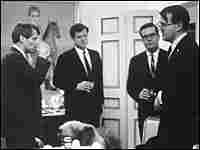 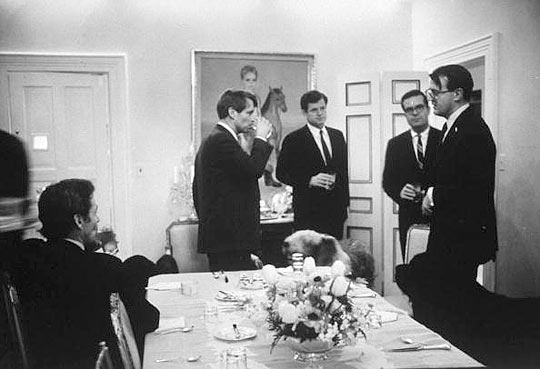 Who Was Bobby Kennedy?

Read a brief snapshot of his life and accomplishments and listen to excerpts from some of his speeches and interviews.

The night Robert F. Kennedy virtually clinched the 1968 Democratic presidential nomination, the scene in his suite at the Ambassador Hotel in Los Angeles was like a "madhouse," one of his closest friends remembers.

On June 4, 1968, Sen. Kennedy had just won the key California primary and looked forward to the Democratic National Convention.

"People were celebrating, cheering each report that came over the television," says Ted Sorensen. "And finally, he was summoned to go down to the ballroom and salute and thank the crowd of his supporters and workers. And I stayed behind in his hotel room, watching on television."

"I saw him speak, thank his supporters, conclude with the stirring words, 'Now on to Chicago,' which was to be the site of the convention that year, continued watching as the camera followed him off the platform only to hear the shots ring out, the commentators saying that Sen. Kennedy has been shot. And there he was lying on the floor.

"I could not believe that what I had gone through five years earlier was happening again," Sorensen tells Renee Montagne, referring to John F. Kennedy's assassination.

Robert Kennedy was shot just after midnight June 5, 1968, and died early the next morning.

In 1963, Sorensen was a top aide to John F. Kennedy, when the president was killed in Dallas.

"Bobby came into my office wearing dark glasses because his eyes had been filled with tears and he was a proud man. He simply stood there for a while. We looked at each other; each knew that the other had suffered a terrible loss. We commiserated a little bit and then he went on to other duties ..."

Sorensen and Robert Kennedy were not always close. The aide came to know the younger Kennedy in 1953, "not altogether favorably, to be frank about it, because we were far apart ideologically and in background," he says.

Robert Kennedy was counselor to the fiery conservative Sen. Joseph McCarthy, when Sorensen worked for the liberal Sen. John Kennedy. But Sorensen remembers it would be years before he and Robert Kennedy became friendly.

In his new memoir, Counselor, Sorensen writes that by the early 1960s, he and Robert Kennedy vied for the attention of the president, somewhat like siblings.

"We both loved John F. Kennedy and were both determined to serve him," Sorensen says. "[Robert Kennedy] was, as attorney general of the United States in 1961 and I as special counsel to the president, both had the edge of jurisdiction on legal problems. So in that sense there was competition, but in a much broader sense, whatever ill will or suspicion there may have been years earlier, we became fast friends." 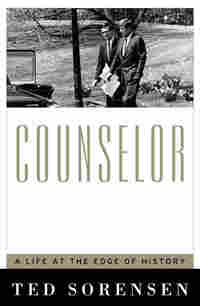 My Relations with President Kennedy's Family

Like me, John Kennedy grew up in a large and loving family that taught, inspired, and helped him along the way. I did not know Joe Kennedy Jr., who was killed in World War II, nor his sisters Kathleen and Rosemary. I admired Jack's sisters Eunice, Pat, and Jean—all strong women, politically savvy and seasoned campaigners for their brothers. I knew well Jack's brothers Bobby and Ted. Though the three Kennedy brothers I knew were very different, each had the same innate capacity for continuing intellectual growth. Unlike most politicians in Washington, who think they know it all once they have reached the nation's capital, all three Kennedy brothers kept learning, growing, expanding their horizons, broadening their agenda.

Jack and Bobby were very different. Bobby was more volatile and intense. He particularly admired physical courage, whereas JFK particularly admired moral and intellectual courage. Bobby was less likely to keep his emotions concealed than Jack. Jack was more likely to accept people as they were, while RFK was more likely to love a person or hate him. Both were quick to grasp a problem, although RFK was more prone to make snap judgments, a trait he later outgrew. Both cited the axiom, "Forgive, but never forget," but the angrier RFK was less likely to forgive, and the gentler JFK was more likely to forget. The difference could be seen on television, where Jack was cool, and Bobby often red-­hot.

Bobby and I were not close friends, but our relationship evolved over three stages. The range and change of my opinions about RFK are best reflected in the following response I gave to an ABC News interviewer in 1967, as a possible RFK race for the presidency loomed: When I first met him, in 1953, the year I went to work for his brother Jack, I would not have voted for Bob Kennedy for anything. He was militant, aggressive, intolerant, opinionated, somewhat shallow in his convictions, and I suppose some people would say more like his father than his brother. But he has changed over the years. When he became a candidate in his own right [for the Senate] in 1964, he became a man appealing for people's votes, their hearts, and that brought out a new Bob Kennedy. Then, for the first time, he had asked for their help, and he found that he could do it. He was shy, just as Jack was very shy; he had a reserve about him, which is still sometimes difficult for him to break out of. I've been with him many times since he entered the United States Senate, and I still find him growing and changing.

Teddy, old pal—Perhaps you could keep down the number of adjectives and adverbs describing me in 1955 and use a few more in 1967. OK? Bob.

We first met when I was a new assistant in JFK's Senate office and he was on the staff of Senator Joseph R. McCarthy's subcommittee, working on investigations into government operations instead of anti-­Communist witch hunts. In those days, he was a conservative, very close to his father in both ideas and manners, sharing his father's dislike of liberals. No doubt he viewed me with as much suspicion, if not disdain, as I viewed anyone working for McCarthy. When members of my family in the early 1950s expressed reservations to me about RFK's relationship with McCarthy, I simply replied that it was a subject I did not wish to discuss.

Our friendship was not enhanced on the occasion when—in a photo opportunity for a magazine article—JFK, RFK, and I went across the street to the Capitol lawn to simulate a touch football game in which JFK threw me a pass with RFK defending. As I reached up for the ball, I felt a powerful and unsportsmanlike shove and went down onto the muddy grass in my one good "Senate suit." I took that as an indication of how he felt about me. The feeling was mutual.

We saw relatively little of each other until the 1956 Democratic convention. By the time JFK ran for reelection to the Senate in 1958, RFK knew me well enough to borrow my only overcoat as the Boston autumn turned colder. By the time he returned it weeks later on Election Day, I had had more than one frozen thought about the Kennedy family's sense of entitlement. As his work on the Senate Labor Rackets Committee investigation ended and he became more involved with the JFK presidential campaign after the Palm Beach summit meeting in April 1959, we saw more of each other.

Even then, he seemed somewhat suspicious, maybe even jealous, of my role and relationship with his brother. Once he embarrassed me by asking that I leave the room so that he and JFK could have a confidential talk about the primary in Wisconsin, where I had spent months making contacts, lining up delegates, and building support. Momentarily flushing with resentment, I understood, and immediately went back to my office.

I was initially disappointed when my job became more narrowly confined to speechwriting after Bobby joined us and took over many of my earlier campaign responsibilities. But I bowed to the inevitable, recognizing that it was what JFK wanted and was in the best interests of the campaign. During the 1960 convention and post-convention campaign, we continued to collaborate without becoming personally close. He did not interfere with my writing, I did not challenge his role as campaign manager, though I heard reports that he was angry whenever campaign staffers still came to me for advice or instructions.

The atmosphere improved during my days in the White House—the second stage in our relationship. We learned to appreciate and respect each other more in our separate roles, though I was not among those invited to weekends at Camp David or to the well-­publicized parties and seminars that he and his wife, Ethel, hosted at Hickory Hill. I did not expect to be included and was too busy to feel excluded.

Bobby and I may have occasionally competed for the president's ear on policy matters, but rarely if ever on legal questions. He and I were in touch regularly, but neither of us gave or took directions from the other. We did not find it necessary to arrange a formal treaty, such as existed in other administrations between the White House counsel's and attorney general's offices. Nor did my office subject the Department of Justice to any of the reviews that we required of other departments before they sent their legislative proposals to Congress.

As RFK began to realize that more coordination between our two offices could help the president's objective of putting forward a coherent legislative package, and as more experience and the passage of time improved relations between us personally, he began to request my office's review and input on some Justice Department matters, including the juvenile delinquency program that would later be expanded into the War on Poverty. On civil rights, we worked closely together and had no differences of opinion. I accompanied him on a trip to Prince Edward County, Virginia, which was defying a court order for racial desegregation. We also collaborated in the efforts he led to roll back the inflationary steel price increase in 1962, and on the Justice Department's position before the U.S. Supreme Court regarding congressional reapportionment standards.

In retrospect, it may have been an error for President Kennedy to name his brother attorney general, although he was a remarkable one. Constitutionally, a principal role of that position is to hold the president legally accountable. Had such a question ever arisen, that would have been a difficult role for RFK to play, although he was far less servile to the president than some of the attorneys general who have served since. Journalistic exaggerations of his White House policy role and influence on JFK ignore the vast areas of government policy and presidential decision making in which he was not involved, and—in view of his heavy responsibilities at Justice—could not have been, although he certainly played an important role in the Cuban missile crisis. 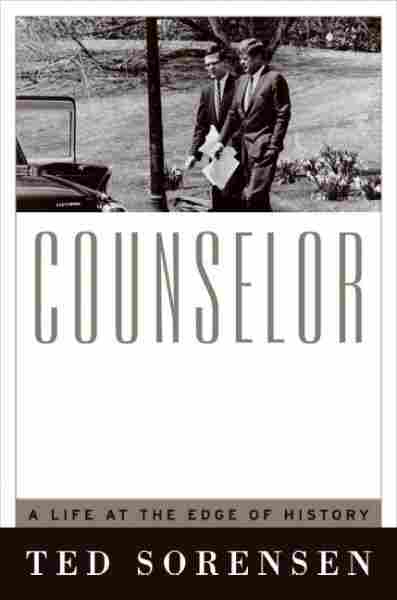 A Life at the Edge of History