Accessibility links
A War Photographer's View of Iraq Chris Hondros has done nine tours in Iraq as a photographer. He talks about memorable images, including that of a little girl — splattered with her dead parents's blood — crouched in darkness near a U.S. soldier.

Note: Slideshow contains images that may be disturbing to some viewers. 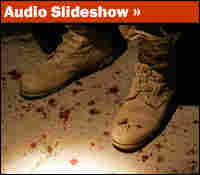 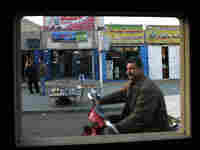 A man rides a scooter, as seen through a U.S. military Humvee window in Baghdad. Chris Hondros/Getty Images hide caption 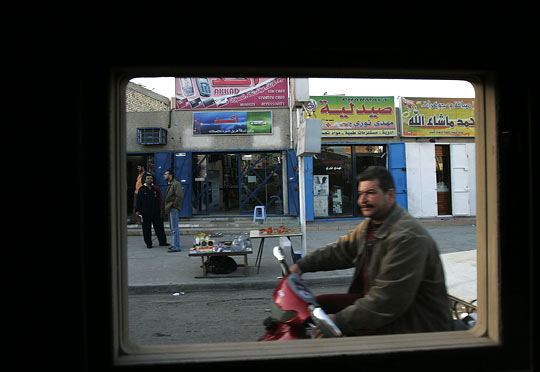 A man rides a scooter, as seen through a U.S. military Humvee window in Baghdad.

Chris Hondros has just returned from his ninth tour of Iraq. He's not a soldier. He's an award-winning news photographer for Getty Images.

And on a January evening in 2005, while on patrol with U.S. troops in the northwestern Iraqi town of Tal Afar, he captured a memorable image: a little girl, covered in the blood of her dead parents.

The car the girl was in ignored warning shots, rolling toward the soldiers. After another round of warning shots, a quick volley of bullets hit the car. It stopped.

Hondros says he heard the sounds of children screaming and crying.

"I knew that there had been a horrible mistake and that there was a family inside," he tells Renee Montagne.

"There were six children in all in the car. The parents were in the front and they had been killed instantly. The children had survived, and one was shot. But they were all covered in blood and so [the soldiers] weren't sure who had been injured and who not."

As the children were brought to the sidewalk nearby, he captured the image of the terrified little girl, standing next to a soldier.

"We share a huge visual memory bank, mostly through painting and other images in history," he says. "I think when a modern photograph taps into those, sometimes very subliminally, it makes people respond."

Hondros has been writing a blog to accompany some of his more recent photos. One entry, from earlier this month, is called "A Drive Through Baghdad". It features photos that are all framed by Humvee windows.

He says shooting from inside the military vehicles allowed him "to get some really candid shots of Iraqi culture .... If there's one thing Iraqis are just inured to at this point it's Humvees driving through their midst." So Hondros' camera captured people shopping, chatting, or flirting.

But another blog entry returns to the daily violence in Iraqis' lives. It describes what happens when an Iraqi family, injured by shrapnel from mortar fire, arrives at a hospital emergency room in Baghdad's Green Zone.

Two of the children were stabilized; the oldest, a girl of ten, was soon positively Churchillian in her stoicism, replacing her tears with wide-eyed wonder and only letting out a yelp when confronted with the needle for the IV. But the youngest, a boy of only a year old, would not stop crying. Eventually the mother crawled on the gurney with him and he calmed some.

Hondros says the scene of the mother, who was wounded and bleeding herself, was "incredibly inspiring, such a pure distillation of a mother's love."