Accessibility links
In 'Kung Fu Panda,' a Pudgy Hero Packs a Punch DreamWorks' animated romp proves charming, if studiously formulaic. The simple story is aimed squarely at tots, but the digitizers have referenced Eastern visual styles — from delicate Chinese screens to flashy Japanese anime — to enliven the look for adults. 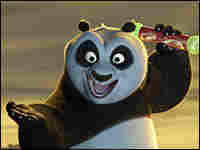 Po (voiced by Jack Black) — an out-of-shape kung fu fanboy who works in a noodle shop — finds himself the unlikely nominee for the post of Dragon Warrior. DreamWorks hide caption 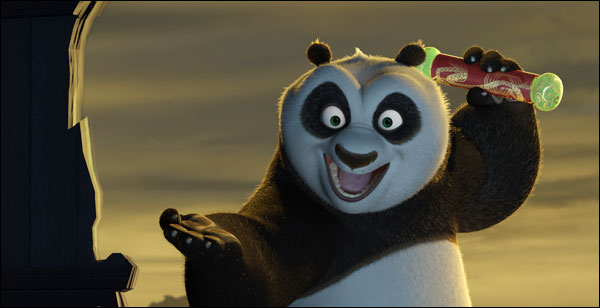 Po (voiced by Jack Black) — an out-of-shape kung fu fanboy who works in a noodle shop — finds himself the unlikely nominee for the post of Dragon Warrior. 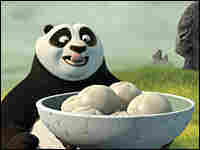 Weigh of the Warrior: Dumplings (and other incentives) help keep Po on task. DreamWorks hide caption

Weigh of the Warrior: Dumplings (and other incentives) help keep Po on task.

Roly-poly Po is mischievous, easily distracted, perpetually hungry and every bit as martial-arts-besotted as he is clumsy. If he weren't a giant panda, in fact, you'd call him a typical preteen.

Voiced by Jack Black in the animated adventure Kung Fu Panda, the unflappable bamboo-chomper spends his days fantasizing about kicking and chopping his way to glory, even as he labors in his father's Chinese noodle shop. (Dad's a goose, a fact that none of the other critters seems to find surprising, so I guess there's no reason for us to.)

Po turns out to be smarter than your average bear, not to mention sweet of disposition and amusingly smart-alecky, but none of that would seem to qualify him for the post of Dragon Warrior — a kind of official Town Protector. But at a competition, he gets accidentally anointed by a distracted turtle sage, and therein hangs our story.

The unorthodox choice bypasses the Furious Five — martial-arts virtuosos Tigress (voiced by Angelina Jolie), Monkey (Jackie Chan), Viper (Lucy Liu), Crane (David Cross) and Mantis (Seth Rogen), who despite all that marquee vocal talent have next to no personality — and obligates the tiny Master Shifu (Dustin Hoffman, as a harried red panda) to train Po so that he can discover the secret of the Dragon Scroll. A great honor — except that a thuggish snow leopard is about to escape from prison.

Though the film's simple story is squarely aimed at tots, DreamWorks' digitizers have referenced Eastern visual styles — everything from delicate Chinese screens to flashy Japanese anime — to enliven the look of the film. Pastel sunsets, hazy mountain vistas and dewy flowering trees can't substitute for an engaging storyline, of course, but they'll no doubt prove distracting for parents, as will Hoffman's quirky Yoda-esque line readings.

Even for kids, the message — not much more complicated than "You have to believe in yourself" — will be something less than a revelation, but there's amusement to be had in the fighting and the training, especially when Hoffman's Shifu discovers that food (and only food) will hold Po's attention.

Eventually there's a big battle, the outcome of which — like everything else in this charming but studiously formulaic animated romp — is never in much doubt.