Accessibility links
Daniel Lanois: Expansive Pedal Steel Performing with Brian Blade, one of jazz's most accomplished and remarkable drummers, Daniel Lanois brought plenty of gravitas to KUT's small vintage studio. His gentle relationship with the pedal-steel guitar astounded a small group that gathered to watch his interview and performance. 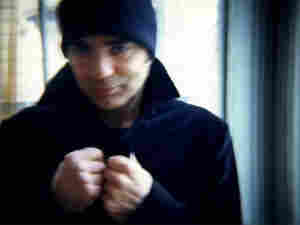 Daniel Lanois is the subject of his own recent documentary, Here Is What Is. courtesy of the artist hide caption

One of our favorite sessions at KUT during this year's South by Southwest festival was with Daniel Lanois, a notable producer, musician, and now filmmaker. Performing with Brian Blade, one of jazz's most accomplished and remarkable drummers, Lanois brought no small amount of gravitas to our small vintage studio. His gentle relationship with the steel guitar astounded the small group that gathered to watch his interview and performance. And, as always, his quiet intellect raised the level of discourse during a week usually overwhelmed by fast-talking and hurried appreciation.

Lanois discussed the state of the music world with host David Brown, commenting on the way we relate to and digest media in its current form. "Bite-sized" bits of music in the form of quick downloads, short video clips, brief glances, and short stares pervade our consciousness, and in part thanks to television, we're forced to swallow it all whole and reflect on it later.

"We're used to advertising blending into our entertainment until it all becomes a soundbite," Lanois said. "But life is not made of soundbites."

He scratched his head as he says this, as if part of him were putting into words a philosophy that had always been there, waiting to be realized.

"If you're walking down the street, life is made of segments, conversations, and trickling streams, expected and unexpected," Lanois continued. "You turn a corner, see a friend, and continue down the road. And music should never stop representing that pace of life."

In many ways, Lanois' music is a perfect output for this way of thinking, as it reveals itself to the listener slowly, incrementally, and subtly.

Daniel Lanois is a Canadian record producer and singer-songwriter. He's released a number of albums of his own work, and has produced albums for a wide variety of artists, including Bob Dylan, U2, Brian Eno, Peter Gabriel, Emmylou Harris, and Chris Whitley.

A new documentary about Lanois, Here Is What Is, includes footage of the recording of the album bearing the same name. The film also shows Lanois' usual collaborators, such as Emmylou Harris, U2, Brian Eno, and Brian Blade.