Accessibility links
A Monument to an American's Selflessness in Iran The nomadic Bakhtiari tribe has named a mountain after Helen Jeffreys Bakhtiar to mark her public health work in Iran in the 1950s. It's a high honor for a woman born in Weiser, Idaho, at the start of the 20th century.

Listen
A Monument to an American's Selflessness in Iran 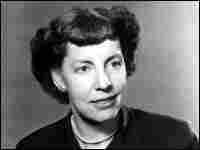 Helen Jeffreys Bakhtiar, pictured in 1951, was a Navy lieutenant commander and went to Iran as part of a U.S. foreign aid project designed to help less-developed countries. Courtesy of Laleh Bakhtiar hide caption

See a photo of Helen's Protected Area taken by Stephan Fuller, an expert on environmental sustainability.

A Snapshot of Iran

Helen Jeffreys Bakhtiar talks about her work there during a 1958 interview with a radio station in Charlottesville, Va. 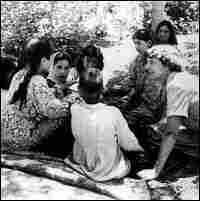 Helen, shown with Iranian villagers in the 1950s, served as a public health nurse. She worked mostly with members of the Bakhtiari tribe in the mountains of southwestern Iran. Courtesy of Laleh Bakhtiar hide caption

Imagine finding out that a nomadic tribe has named a mountain after your grandmother.

My mother and I learned just that when a relative phoned to say the storied Bakhtiari tribe had so honored my grandmother, Helen Jeffreys Bakhtiar, to commemorate her public health work there in the 1950s. It's quite a legacy for a woman born in Weiser, Idaho, at the beginning of the 20th century.

Located in the central Zagros Mountains of Iran, near the ancient city of Isfahan, the area around Kohe Helen or Helen's Mountain, is home to a wide variety of species, including brown bears, leopards, wildcats and eagles. Iranian environmentalists have marked the mountain and the surrounding forests as a protected area.

In the 1950s, Helen was a lieutenant commander in the U.S. Navy. She traveled to Iran to serve as a public health nurse as part of President Truman's Point Four Program. The rural improvement project sent American experts in agriculture, health and education to work in villages in less-developed countries.

Traveling by jeep to remote villages, the daughter of conservative Baptists from Boise lobbied tribal elders on the need to educate women about health care. In one instance, Helen single-handedly convinced a reluctant village cleric to allow local women to attend her prenatal class.

She also spent time in a village called Koshkerood, or "dry river." In a 1958 interview, Helen recalled, "When we finally left the village, the people said to me, 'You have given us hope.' And when our engineers put a shallow well in this village so the people would have proper drinking water, they said, 'And with water, you have given us life.'"

My grandmother worked primarily with the people of the Bakhtiari tribe in the mountains of southwestern Iran between the cities of Ahwaz and Isfahan. The Bakhtiari are made up of two main, loosely organized nomadic clans: the Chahar Lang and Haft Lang.

One of her life's highlights was accompanying the Bakhtiari on their biannual migration across snow-capped mountains and the icy waters of the Karun River to find pastures for their flocks of sheep and goats.

The Bakhtiaris first entered Helen's life when, at age 22, she defied convention and married an Iranian doctor 30 years her senior in New York City. He was born in a village in the Bakhtiari region, and when she fell in love with him she fell in love with the tribe. Four years later, in 1931, they moved to Iran and Helen helped open one of the country's first private hospitals. She worked as an anesthesiologist, and in time she became the mother of seven children.

In 1939, when the world was on the verge of war, Helen returned stateside with three of her children because it had become too dangerous for Americans in Iran. After World War II, she went back to Iran to reunite with her family but realized that she and her husband had grown apart. The couple decided that she should settle in the United States so that their children could receive an American education.

They divorced several years later. But Helen never lost her love for Iran, and by 1950, she had become involved with Point Four.

My grandmother died in 1973. She is buried in the Iranian city of Tus, near the tomb of the legendary Persian poet Ferdowsi. She didn't live to witness the Iranian Revolution or the embassy hostage-taking ordeal, but her story illustrates how one woman broke down barriers and encouraged love, understanding and mutual respect.

I've never seen the mountain that's been named after her, but now I know that somewhere in the Chahar Mahal Bakhtiari region of Iran, Mount Helen stands as a monument to my grandmother's selfless spirit.