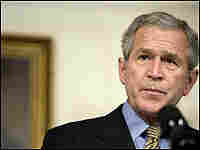 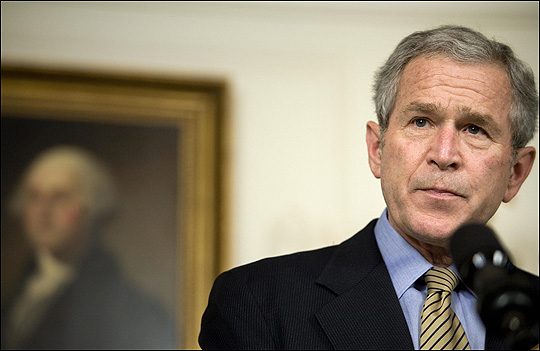 President Bush says he wants a war-funding bill with no timetable attached.

The new Democratic-led Congress has taken its most audacious action yet on Iraq.

In a cliffhanger vote — 218 to 212 — the House of Representatives defied a White House veto threat and passed an emergency war-funding bill requiring that most U.S. forces be out of Iraq no later than August 2008.

Just an hour after the bill passed, President Bush fired back from a White House event, where he stood ringed by military veterans. He derided the House vote, calling it an act of political theater.

Should the bill reach his desk, the president vowed, he will veto it, adding: "because the vote in the House was so close, it is clear that my veto would be sustained."

A confrontation with Congress is clearly growing over war powers. Mr. Bush went on to say he won't accept any congressional dictates on how to fight the war:

"These Democrats believe that the longer they can delay funding for our troops, the more likely they are to force me to accept restrictions on our commanders, an artificial timetable for withdrawal, and their pet spending projects," he said. "This is not going to happen."

The first target of that tough talk is the Senate, which is about to take up a war-funding bill of its own that also has troop withdrawal guidelines.

In some respects the Senate bill goes farther than the House version. It requires that phased troop redeployments begin 120 days after enactment. And it sets a non-binding target date for having most troops out by March 31, 2008.

Sen. Mitch McConnell of Kentucky, the Senate minority leader, said Friday that he feels an urgency to act on the war-funding bill.

"It is the view of the of the Republican side of the aisle that we need to finish that bill next week," McConnell said. "The troops need the money, there's a veto threat out against the bill potentially, if it's not fixed on the floor of the Senate."

The fix McConnell favors is an amendment sponsored by some of the Iraq war's most ardent supporters — Republicans such as Sen. John McCain of Arizona and Sen. Lindsey Graham of South Carolina and Sen. Joe Lieberman of Connecticut, who now describes himself as an independent Democrat.

It would strip the bill of language requiring troop withdrawals, which, as Lieberman points out, was already rejected as a stand-alone resolution:

"I believe that we're gonna succeed in striking this harmful language from the bill on the Senate floor next week," he said. "It is exactly the same language that got 48 votes last week. I don't know why anybody would change from now 'til then. Frankly, I think it's a possibility we may get maybe one or two more."

But a vote to remove the troop withdrawal language could be extremely close in a Senate where Democrats have just 51 members in their caucus — and one of them is Lieberman.

Another Democrat, Sen. Tom Harkin of Iowa says it takes only a simple majority — 51 votes — to change the bill. He also sees the chance that the House language could be adopted as representatives of the two chambers work out differences during a conference session.

Still, it's a long shot for the troop withdrawal requirements ever to become law, given the veto threats. Senate Majority Leader Harry Reid said Friday that the war-spending bill will be taken up Monday, and that it won't be easy:

It's not clear whether that bill will be finished before a ten-day Easter recess.